The Global Cooling Scare of the 1970s was real, there was a consensus, and it was all over the media. It flies in the face of the man-made warming campaign. After World War II there was a massive industrial escalation in the West. And just as coal fired power was going in everywhere, the world damnwell cooled by -0.3°C. It’s obvious that the modern Climate Witches don’t want people bringing this up. 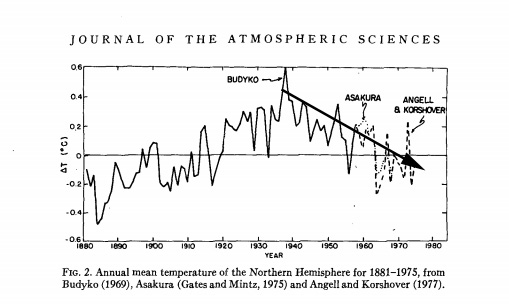 Where’s that cooling gone? The modern NASA GISS dataset adjusted it away:

What happened to 40 years of cooling from WWII onewards?

That’s the magic of homogenisation.

In 2008,  Peterson, Connolley, and Fleck published “The Myth of the 1970s Global Cooling Scientific Consensus” . The Myth paper “found” that from 1965 through 1979, there were only 7 cooling, 20 neutral, and 44 warming papers. It was published in Bulletin of the American Meteorological Society (AMS), showing how pathetically weak the caliber of review is there. Kenneth Richard searched, found and documents 220 papers, not 7 in the same period. He estimates there are probably many more.

The Connolley there is none other than the  William Connolly who abused Wikipedia’s editing rules — barred 2,000 other Wiki editors that he disagreed with, and changed over 5,000 articles to conform with his personal warming religion and his Greens political activism. Apparently he’s used the same flagrant bias in the peer review literature. Wiki took away his Admin status, which appears to be a higher standard than AMS. So much for “peer review”.

It’s all on NoTricksZone where he finds 285 papers from the 1960s-’80s that reveal the Global Cooling Scientific ‘Consensus’.

It was the “prevailing view” in Stewart and Glantz, 1985:

“in the early 1970s the prevailing view was that the earth was moving toward a new ice age. Many articles appeared in the scientific literature as well as in the popular press speculating about the impact on agriculture of a 1-2°C cooling. “

According to Richards even the CIA knew the models and met experts predicted cooling:

According to scientists reporting to the U.S. Central Intelligence Agency (1974), 22 of 27 forecasting methods predicted a cooling trend for the next 25 years, and “meteorological experts” were thinking an 1800s climate was around the corner, with the concomitant return to monsoon failures, shorter growing seasons, and “violent weather”.

“Concern about climatic change and its effects on man has been increasing. Climatic changes affect the production of food and the allocation of energy resources. … Even with the temperature corrections included, Indiana June, July and August mean temperatures showed a decrease of approximately 3°F [-1.7°C] from 1930 to 1976.”

“According  to the academy  report on climate, we may be approaching the end of a major interglacial cycle, with the approach of a full-blown 10,000-year ice age a real possibility.”

Introduction: “In the last century it is possible to document an increase of about 0.6°C in the mean global temperature between 1880 and 1940 and a subsequent fall of temperature by about 0.3°C since 1940.

“It is not clear how such favorable and relatively consistent conditions are related to the higher temperatures in this century or the peaking of temperatures around 1940.  The reversal of this warming trend, however, could mark the beginning of a new ice age as some climatologists have indicated.

There are many more. It’s an excellent resource compiled by Richards, see it all at NoTricksZone.

Everyone knows that before the global warming scare began in the 1980s, scientists were much more worried about global cooling and the coming ice age. At least everybody did till a cabal of lying climate alarmists – one then a senior administrator at NOAA, now a president at the World Meteorological Association –  hijacked Wikipedia, published a lying paper, and rewrote history by painting the 1970s Global Cooling Scare as an urban myth.