There’s a nuclear fusion reactor in the neighborhood that weighs 300,000 times more than Earth. It’s eight minutes away at the speed of light, has 99.8% of the mass of the solar system, and surrounds us with changing magnetic and electric fields while it rains down charged particles. Some years the Sun throws ten times as much extreme-UV our way as it does in other years. Virtually none of this is included in mainstream climate models.

The constant wind of charged particles blows at a million miles an hour — the flow waves and wiggles, shifting direction. The speed of the solar wind correlates with sea surface temperatures in the Atlantic. The solar magnetic field reaches right to the edge of the solar system, but despite that size, it turns itself completely upside down every 11 years. Reconnecting magnetic field lines cause explosions in space, and we have barely started to collect data on this. During the magnetic cycle the sun changes color, though the changes are invisible to us. The spectrum rolls from more UV to more infra red, and each type of light has different effects. Unlike infra red, UV transforms oxygen into highly reactive ozone which creates warming in certain zones, sometimes high over the poles, sometimes more so over the equator. These warmer blobs expand and it’s possible that they shift the jet stream positions, which affects cloud formation and albedo. UV also reaches further into the oceans where it affects plankton, which in turn produce gases that seed denser clouds. Forests and plants on land also seed clouds and influence rain.

Running through all of this, and from a different direction, are cosmic rays which also appear to seed clouds. Their path through our atmosphere is also affected by the solar magnetic field.

Complicating things even further, the Sun may have a dual core — two dynamos operating in the north and south on cycles that are nearly but not quite in sync.

Years from now, people will gasp that the so called experts of the millennium thought the Sun could have little effect — apart from just shining light upon us.

The extra sunlight coming from a more active Sun appears to have a much larger effect than it should in the long run, but has no effect in the year that it occurs. Something is both neutralizing it in the short run, but amplifying it in the long term. David Evans lists below some different mechanisms, with references, for ways that the Sun could be controlling our cloud cover, or albedo. There are undoubtedly others that could be Force D, N or X. One factor is briefly “notching” out the effect of the small spike in solar light during the peak of a solar cycle (Force N). Paradoxically, some other factor appears to be at work throughout the cycle but is delayed by one solar cycle (Force D) — it works in the opposite direction to Force N.

We don’t know the mechanisms behind forces X, N, or D. In this post we canvas a few of the possibilities, but offer no opinion on which if any it might be.

Or there may be solar influences which are not yet explained, e.g. Stober 2010. Force X/D may involve combinations of the factors above. 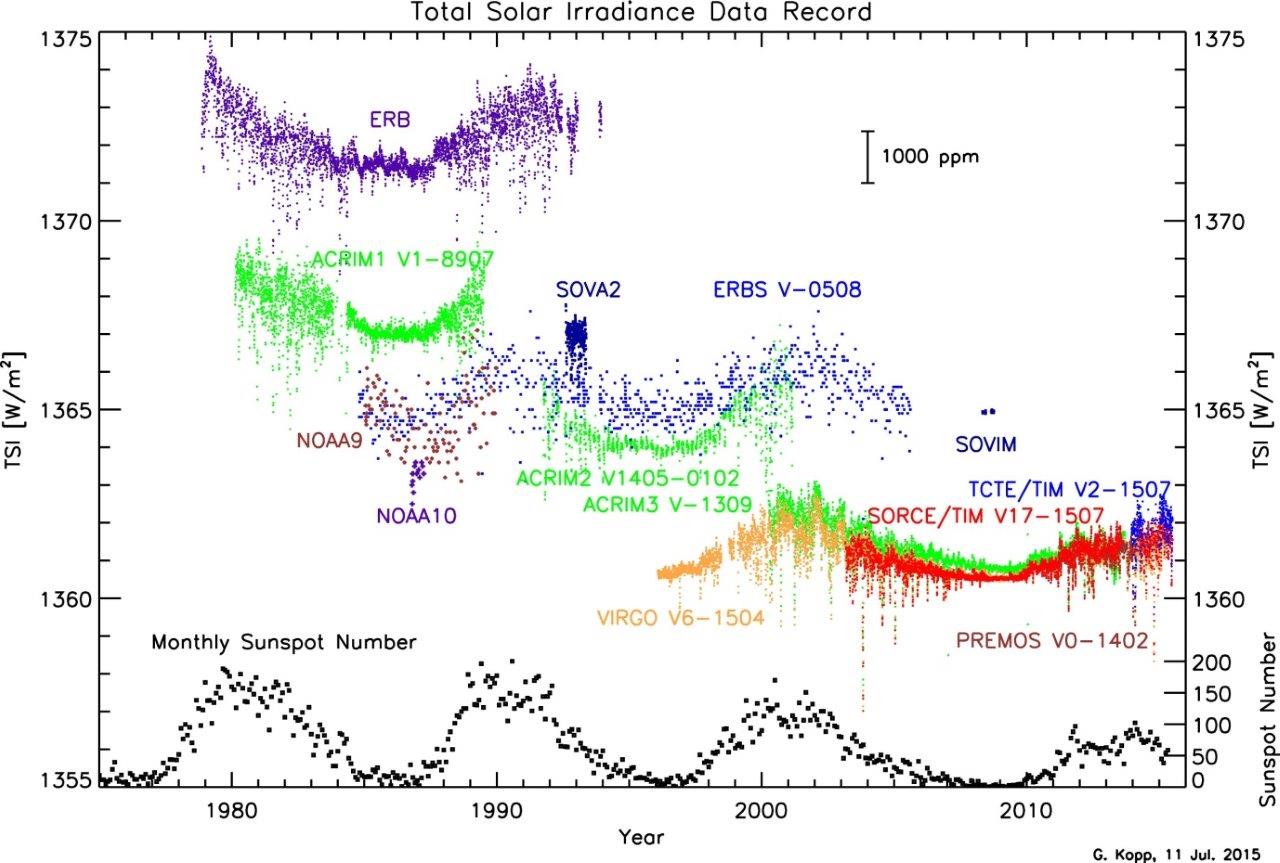 Figure 1: TSI data from late 1978, when satellite observations started. “Instrument offsets are unresolved calibration differences, much of which are due to internal instrument scatter” Source.

Yoshimura (1996 [9]) found that the ERB-TSI lagged the sunspots by 10.3 years (pp. 606–7). Force X/D lags sunspots by that duration, so perhaps the difference between whatever Nimbus-7/ERB measured and what later TSI instruments measured is related to force X/D.

Yoshimura concluded (p. 601): “We argue that the time lags between the TSI and magnetic field variations demand us to consider the influences of the Sun on the Earth and on the space environment through two channels which are physically linked together but their variations may not necessarily be in phase in time. One channel is through the irradiance variations and the other is through the magnetic field variations. Time evolution of a phenomenon on the Earth that is influenced by the Sun can be in phase as well as out of phase with the solar magnetic cycle if this phenomenon is mainly caused by the irradiance variations of the Sun”.

(The Yoshimura paper was drawn to our attention by SunSword, a reader on this blog.)

[8^] Wilson, I. R. (2011). Are Changes in the Earth’s Rotation Rate Externally Driven and Do They Affect Climate? The General Science Journal.