Who needs a trend when you can have a hot month?

The news is all over the media — Feb 2016 was a record hottest ever month — and the Global Worriers  are saying “Meltdown“, “Planetary Crisis” and “Terrifying Milestone.”

But the Pause is still there. No matter what happens now, the world didn’t warm for 18 years, and that shows the models can’t predict a thing. (Unless they take solar factors into account, which they don’t).

Nothing that happens after 2015 can change the amount of energy that went missing during the Pause that no mainstream modeler predicted. Remember these models are supposed to be coupled ocean and atmosphere models, but none of them understand what causes shifts in the PDO, or many other natural cycles and currents of the ocean. So with every natural spike up, modelers unscientifically leap in glee, and with the other 99% of the data, they blame internal variability. But a real scientist is scientific every month. Trends, guys, trends. That’s what this debate was supposed to be about. Not spikes. Not noise.

During the last whopper El Nino in 1997-98, CO2 levels were 365ppm, They’re now 400ppm. This El Nino should be hotter than the last big one. For a lot of the last 10 years the Global Worriers have been claiming that we can’t start a pause with an El Nino. So why is OK to stop a Pause with one? 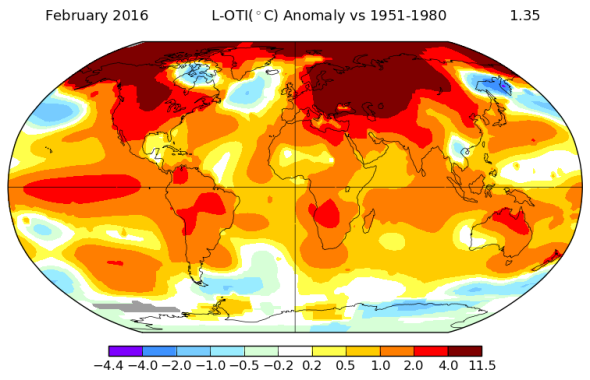 The heat wasn’t “global” but was an Arctic, Russian, Alaskan thing (see the dark red above and the top graph of the three below). It’s likely the heat has come out of the ocean. So an ocean current may have shifted. Or solar influences may have moved the jet streams….

There is no planetary emergency in half the planet.

Thanks to Jennifer Marohasy, Lance, John.