Predicting seasonal rainfall months ahead has surely got to be the Holy Grail of weather forecasting. Imagine the billions of dollars, the man-hours, and the anguish-prevented if we can do it. What if neural nets can be trained, validated, and used to help farmers, investors, and “Oi” — even Dam Managers?

Jennifer Marohasy and John Abbott were inspired to try a whole new approach to rainfall predictions after John’s car met a sad end in the infamous Brisbane flood. After five years work they’re keen to share the results, and their predictions. Check out those graphs below. The last one has a 3000 year range.

Read about how difficult it was for them to get useful data from the BOM, and how the BOM does not do proper benchmarking of their success rates. How serious are they? As usual, it’s those outside the stagnant pond of government approved science that are testing new ground. The government talks about innovation. Independent researchers do it.

***Jennifer Marohasy is speaking in Deniliquin NSW on Friday (tomorrow 6pm — details at the bottom)***. 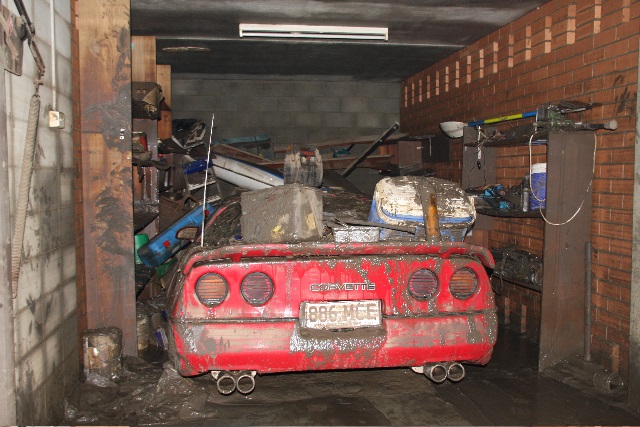 She will be sharing the results of their research on using neural nets. How about this graph? That is quite some match — note one forecast (dotted orange line) versus the outcome (solid line). Note that sweet correlation. 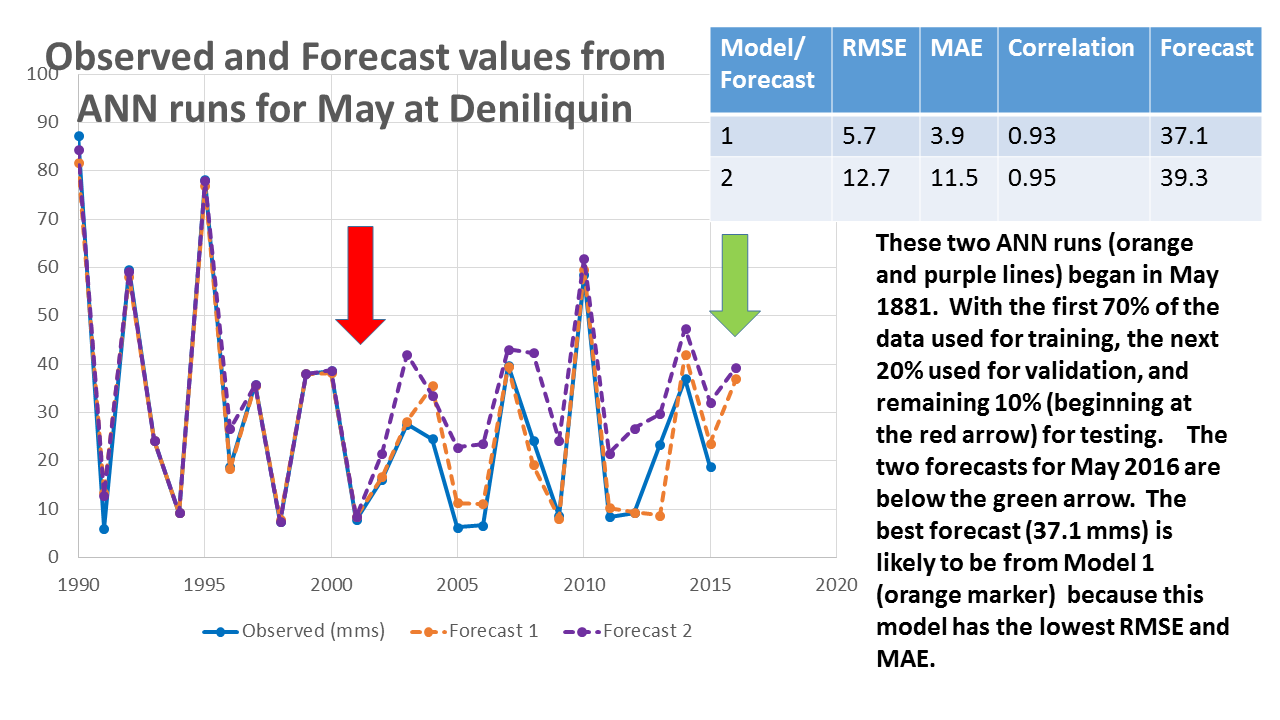 I’m delighted to share some tantalizing results here. Thanks to Jen!

Rainfall Forecasts Should be Benchmarked

According to Bill Gates, “You can achieve incredible progress if you set a clear goal and find a measure that will drive progress towards that goal.”  This may seem basic, but it’s not practiced enough, and certainly not when it comes to rainfall forecasting.

The Bureau of Meteorology increasingly use their weather and climate forecasts to warn of looming catastrophe. This use of ‘forecasts’ to advance an agenda is common in politics, but it’s not something the Bureau should be engaged in.

A key Bureau goal should be the best possible rainfall forecast for the public.  Their rainfall forecast should be presented and reported in a measurable and understandable way. Instead we are given vague probabilities, which research has shown are often misinterpreted by farmers.

Furthermore, there should be some follow-up.  For example, at the end of a week, a month, or a season we should be told how reliable their daily, monthly and seasonal forecasts have actually been.

Its five years now since Brisbane flooded, so about five years since I started working with John Abbot and artificial neural networks to see if was possible to actually forecast the extraordinary wet season of summer 2010/2011 in south eastern Queensland.

Back in 2010, sea surface temperature and sea surface pressures profiles across the Pacific suggested we were in for a big wet.   Yet the Wivenhoe reservoir upstream of Brisbane, a dam actually built for flood mitigation, was kept full of water.

John Abbot’s little red corvette sports car was drown in the Brisbane flood.  It was in a river-side garage in St Lucia, Brisbane, and totally submerged for 36 hours.  He was heartbroken. The loss spurred us to see if we couldn’t apply the technique he had used to make the money to buy that car, to rainfall forecasting.  In particular, we were keen to see if artificial neural networks with the right algorithms, and high quality historical temperature and rainfall data, could have forecast the flooding.  John Abbot regularly used artificial neural networks and historical trading data to successful forecast directional trends in the share market.

By August 2011 we had monthly rainfall forecasts for 20 sites across Queensland, and we wanted for compare our output from the best general circulation model (POAMA) used by the Bureau of Meteorology.  But try as we might we couldn’t actually get the taxpayer-funded Bureau to give us the data we needed to make proper comparisons.

The Bureau were not doing the one thing that Bill Gates says is critical to improvement: benchmarking.

After flying to Melbourne, and threatening to jump out a sixth floor window if the data wasn’t handed over (well I exaggerate somewhat), we got access to only enough data to enable us to publish a series of papers.  Indeed, the Bureau still refuses to make available the most basic of data which would allow their rainfall forecasts to be objectively scored.

Back in 2011 it was evident that John Abbot and I could do a better monthly rainfall forecast than the Bureau.  To our surprise key science managers at the Bureau agreed: conceding that our forecasts were more skillful. But, they argued, climate was on a new trajectory so our method would not work into the future!

This claim is, of course, based on the theory of anthropogenic global warming.  This is the same theory that continues to underpin all the forecasts provided by the Bureau through the use of general circulation models.

An alternative approach using artificial neural networks, fits under the umbrella of ‘Big Data’ and ‘machine learning,’ that relies on pattern analysis, and is proving successful at forecasting, where results are properly benchmarked, in fields as diverse as medical diagnostics, financial forecasting and marketing analysis.

Sinusoidal model in blue fitted using 7 sine curves to a temperature reconstruction from a stalagmite in South Africa.

I will be in Deniliquin, NSW, on Friday 26th February, showing both temperature and rainfall data for the Murray Darling region that indicate our climate is not on a new trajectory.   I will also be explaining the principles of rainfall forecasts using artificial neural networks, and making some forecasts.

I will also show how proxy data giving an indication of climate change over the last 2,000 years can be deconstructed into sine curves.   Seven sine curves of different frequency and amplitude potentially corresponding to natural climate cycles driven by variations in the Earth’s orbit and solar activity (e.g. magnetic field) can be used to generate a sinusoidal projection, suggesting future global cooling.  Cooling in the Murray Darling Basin is typically associated with period of below average rainfall.

Jennifer Marohasy is a Senior Fellow at the Institute of Public Affairs (www.ipa.org.au ), Founder of the Climate Modelling Laboratory (www.climatelab.com.au ) and a spokesperson for Myth and the Murray Group (www.mythandtheMurray.org)

Jennifer has a version of this post at her blog Rainfall Forecasts Should be Benchmarked.