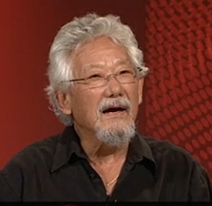 It’s a science debate, and Suzuki pops up again, as he does periodically, with innuendo, namecalling and feets of logic. (He’s reasoning with both feet.) He’s not even offering well researched ad hom attacks. They’re not only irrelevant and unscientific, they’re wrong too.

On June 18, Suzuki told us that irrational attacks diminished the debate. On Sept 1, Suzuki is firing fallacies, no data, no research, no reasoning.

He laments that political leaders are not gullibly swept away (as he is) by baseless rumours, ad hominem attacks and articles in The Guardian. I can’t think why myself, but  Suzuki explains, with his science guru hat on, that there is an”enormous” amount of fossil fuel funding, which is also secretive and unrevealed. I guess he’s putting his psychic powers to the test. Who needs evidence or sources anymore?

Suzuki really unleashes his full fantasy ad hom. Fossil fuels are funding practically every player in the US, UK and Canada: Heartland, GWPF, ICSC. Even the unfunded, volunteer run, Watts Up is an “industry funded website”  – I bet Anthony Watts can’t wait for those cheques to start arriving. (Neither can I). For the record, Climate Depot gets 80% of it’s support from citizens. It has thousands of supporters.

“Part of the problem is that fossil fuel interests spend enormous amounts of money to sow doubt and confusion, often by funding or setting up organizations like the Heartland Institute in the U.S., the Global Warming Policy Foundation in the U.K., Ethical Oil and Friends of Science in Canada and the International Climate Science Coalition, based in this country but affiliated with similar organizations in Australia and New Zealand and with close ties to Heartland. A number of industry-funded websites also promote fossil fuels at the expense of human life, including Climate Depot and Watts Up With That?”

This line of attack is so old, it’s like Suzuki got trapped in 2007, but the world moved on. When Suzuki finds out that Royal Dutch Shell has been lobbying against coal, funding “progressive” think tanks, and promoting carbon capture, he’s in for a headache. When he finds out Exxon paid four times more to the Stanford Global Climate and Energy project, than they every gave to “deniers” he’ll have to become a skeptic.

Someone needs to tell Suzuki that “fossil fuels” are not just one industry, with one union and one big chumpy PR office, but industries called coal, oil, gas, and shale, and they all compete with each other. Big-Oil and Big-Gas like the anti-CO2 message because it hurts Big-Coal, their main competitor. Big-Gas like wind farms, because they are useless erratic things, and any country afflicted with them needs gas powered turbines. But the world is such a complicated place.

All skeptics are wrong because they don’t all say the same thing?

Apparently skeptics have been falsified because thousands of independent unfunded people cannot agree on one single theory. They should only have one permitted opinion, (like believers do, right, because that’s how science advances, one dogma at a time?):

In a Guardian article, co-author Dana Nuccitelli said their study found “no cohesive, consistent alternative theory to human-caused global warming.” Instead, “Some blame global warming on the sun, others on orbital cycles of other planets, others on ocean cycles, and so on.”

A consensus is profoundly unscientific, and Suzuki ferments that fallacy. Argument from authority, here we come:

Nuccitelli and fellow researchers Rasmus Benestad, Stephan Lewandowsky, Katharine Hayhoe, Hans Olav Hygen, Rob van Dorland and John Cook note that about 97 per cent of experts worldwide agree on a cohesive, science-based theory of global warming, but those who don’t “are all over the map, even contradicting each other. The one thing they seem to have in common is methodological flaws like cherry picking, curve fitting, ignoring inconvenient data, and disregarding known physics.”

Cook found 64 papers out of 12,000 that support the consensus. In Cook-calculations, 64 is 97% of 12,000 (when will Environ Res Letters retract it?). Believers not only cherry pick,  ignore thousands of observations, but they are also bad at maths. There is no inconvenient data that skeptics “ignore”, there is only adjustimongered data that no one can recognise, and inconvenient data that believers won’t give to skeptics.

Canadians must continue to speak out for our water, land, air and wildlife, for justice for Indigenous Peoples, and for a clean energy future — without fear of harassment, intimidation and hatred.

Exactly. So when will David Suzuki stop calling dedicated scientists “deniers” and inventing fantasy claims about their motives and funding? If skeptics have got the science wrong, just explain it Dr Suzuki. There is not one single word of scientific truth in that article.

Suzuki explains how hard it is to be an activist:

…environmental advocacy has never been easy. As Heiltsuk community organizer and First Nations leader Jess Housty says, “Activism is hard. It pits you against forces that have a lot at stake, and who fight dirty and bite back hard.

I’ve spoken to thousands of environmental and community activists during many years of meeting with Canadians across this country. I’ve heard too many stories of people being harassed, ostracized, sued for standing up to large corporations and even fired from jobs because of their environmental advocacy.”

It’s true, it’s hard being a science advocate. We keep having to explain what logical fallacies are and whatthe scientific method is to people with PhD’s in environmental religions.

For the record, Climate Depot, Marc Morano and CFACT are mostly funded by concerned citizens. I asked Marc, and he replied:

“In its most recent 2014 annual report, CFACT reported that it had received 80% of its annual budget from citizen supporters, 16% from foundations, and 4% from corporations.  It is not CFACT’s policy to identify particular sources of funding.

However, we can also report that the Climate Hustle film project has been funded 100% by the support of nearly 1,500 private individuals.”

The reason they, like Heartland, no longer discuss particular sources of funding is because of harassment by environmental activists who think views should be shouted down with innuendo and attacks rather than debated politely.

Once upon a time, when I was training in science communication, we went and saw David Suzuki “live” because he was held up as a prime example of what we should be when we grew up, so to speak. That tells you all you need to know about how immature the field is.