What is surprising is just how much data we have on the Sun from 400 years ago.

For some aspects of solar activity we barely have a half a solar cycle. For example, on solar spectral changes: UV and Infrared light swing up and down through the solar cycle, but we only got a good grip on these important changes in the last ten years with the SORCE mission.

But on other aspects of solar activity there is much more long term data than I expected: 400 years ago quite a few people were carefully recording detailed drawings of sun spots (like Cassini in 1671, right). Others were reporting aurorae — up to 150 a year in parish records, newspaper reports, and scientific observations, which tells us something about the strength of the solar wind. There were also observations of the solar corona during eclipses at the time, which suggest the sun was less active as well.

Lately some (Zolotova et al)  have said solar activity was not low during the cold Maunder Minimum period from 1645 – 1715. Usoskin and others have responded by amassing a compedium of  historic data demonstrating that something very unusual was going on with the sun during that time. They not only look at sun spots, but aurorae, solar corona observations, Beryllium in ice cores, Carbon 14 in tree trunks, and titanium in meteorites.

We know aurorae were rarer or smaller during the Maunder minimum because for 80 years there were virtually no reports of auroras in Great Britain, though keen observers were looking for them, and recording “clear skies” day after day.

There were reports of aurorae from the late 1500’s in the UK, Denmark, and Prague, but then early in the 1600’s activity fell away. The silence was loud. At the end of the Maunder period, across northern Europe on  “Tuesday 17th March 1716” people all over Northern Europe reported aurorae, including Edmund Halley in Great Britain, who had never seen one before, yet had read about them, and looked for them. He’d begun to despair he might never see one. One Petter Dass in Norway did miss out, he diligently recorded the night sky from 1645 to 1707 when he died, and though he had read many historic reports of aurorae, he never recorded seeing one himself. His bad luck, to be an astronomer and his whole adult life spent during the quietest period for centuries.

The world has warmed since 1680, as best as we can tell, and solar activity has increased since then too. This graph of TSI (total solar irradiance) shows that rise — though the absolute change is tiny. TSI changes are small but appear to be another indicator of solar activity.

As we keep suggesting, some other factor on the Sun, like the solar-magnetic, spectral changes or solar wind may be responsible for changing the climate on Earth. Correlation is not causation, but neither is it nothing. Yet, the mainstream Climate Models assume all the other solar factors are irrelevant.

The Zolotova and Ponyavin paper suggested that solar activity was much higher (red dashes) compared to other reports.

Look at the detail of this drawing by Cassini, 1671 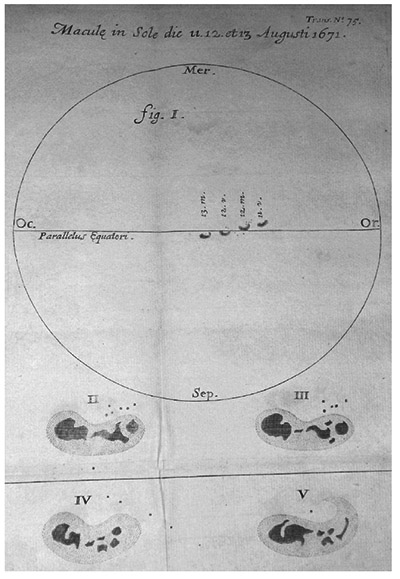 Fig. 2. Drawing of a sunspot group observed in August 1671, as published in number 75 of the Philosophical Transactions, corresponding to August 14, 1671.

The amount of aurorae data is remarkable

Fig. 11. Occurrence of auroral reports, 1700-1900. The green line is the number of auroral nights at geomagnetic latitudes below 56◦ from a combination of several catalogues (Nevanlinna, 1995; Fritz, 1873, 1881; Legrand & Simon, 1987). The points show the geomagnetic latitude and time of auroral sightings from the catalogue of V´azquez et al. (2014) (their Figure 9). Black diamonds, red squares and red triangles are, respectively,
for observing sites in Europe and North Africa, North America, and Asia. Blue dashed lines mark the minimum latitude of auroral reports in the last solar cycle of the Maunder minimum (MM) and in the two cycles of the Dalton Minimum (DM).

There is a stark dearth of aurorae recorded during the Maunder Minimum:

Fig. 12. Same as Figure 10 (see caption below graph box), but compiled from 41 different catalogues of auroral observations at magnetic latitudes below 55◦ in Europe, Asia, North Africa, New England and Great Britain. The time series covers both the Maunder and the Dalton minima.

[Fig. 10. (a) The grey histogram shows the number of auroral nights, NA, in calendar years for observations in Great Britain collated by E.J. Lowe (1870) with the addition of the observations by Thomas Hughes (Harrison, 2005) and John Dalton (Dalton, 1834). The black line shows the annual group sunspot number of Hoyt & Schatten (1998), with the adoption of recent corrections by Vaquero et al. (2011) and Vaquero & Trigo (2014). Lowes personal copy of his catalogue of natural phenomena (including auroras) was only recently discovered and was compiled completely independently of other catalogues. Yet it shows, like the others, the dearth of sightings during the Maunder minimum, some events in 1707 and 1708 and the return of regular sightings in 1716. (b) Annual variation of NA in the same dataset and of RG.]

What is significant about this event is that very few people in the country had seen an aurora before (Fara, 1996). Indeed, Halley’s paper was commissioned by the Royal Society for this very reason. This event was so rare it provoked a similar review under the auspices of l’Acad´emie des Sciences of Paris (by Giacomo Filippo Maraldi, also known as Jacques Philippe Maraldi) and generated interest at the Royal Prussian Academy of Sciences in Berlin (by GottfriedWilhelmLeibnitz).All these reviews found evidence of prior aurorae, but none in the previous half century. Halley himself had observed the 1716 event (and correctly noted that the auroral forms were aligned by themagnetic field) but had never before witnessed the phenomenon. It is worth examining his actual words: “…[of] all the several sorts of meteors  of, this [aurora] was the only one I had not as yet seen, and of which I began to despair, since it is certain it hath not happen’d to any remarkable degree in this part of England since I was born [1656]; nor is the like recorded in the English Annals since the Year of our Lord 1574.” This is significant because Halley was an observer of astronomical and atmospheric phenomena who even had an observatory constructed in the roof of his house in New College Lane, Oxford where he lived from 1703 onwards. In his paper to the Royal Society, Halley lists reports
of the phenomenon, both from the UK and abroad, in the years 1560, 1564, 1575, 1580, 1581 (many of which were reported by Brahe in Denmark), 1607 (reported in detail by Kepler in Prague) and 1621 (reported by Galileo in Venice and Gassendi in Aix, France). Strikingly, thereafter Halley found no credible reports until 1707 (Rømer in Copenhagen and Maria and Gottfried Kirch in Berlin) and 1708 (Neve in Ireland).He states “And since then [1621] for above 80 years, we have no account of any such sight either from home or abroad”. This analysis did omit some isolated sightings in 1661 from London (reported in the Leipzig University theses by Starck and Fr¨uauff). In addition to being the major finding of the reviews by Halley, Miraldi and others (in England, France and Germany), a similar re-appearance of aurorae was reported in 1716-1720 in Italy and in New England (Siscoe, 1980).

The absence of auroral sightings in Great Britain during the MM is even more extraordinary when one considers the effects  of the secular change in the geomagnetic field. For example, using a spline of the IGRF (InternationalGeomagnetic Reference Field, http://www.ngdc.noaa.gov/IAGA/ vmod/igrf.html) model after 1900 with the gufm1 model (Jackson et al., 2000) before 1900 we find the geomagnetic latitude of Halley’s observatory in Oxford was 60.7◦ in 1703 and Edinburgh was at 63.4◦. Auroral occurrence statistics were taken in Great Britain between 1952 and 1975, and of these years the lowest annual mean sunspot number was 4.4 in 1954. Even during this low solar activity year there were 169 auroral nights observed at the magnetic latitude that Edinburgh had during the MM and 139 at the magnetic latitude that Oxford had during the MM (Paton, 1959). In other words, The British Isles were at the ideal latitudes for observing aurora during the MM and yet the  number reported was zero. This is despite some careful and methodical observations revealed by the notebooks of several scientists: for example, Halley’s notebooks regularly and repeatedly use the term “clear skies” which make it inconceivable that he would not have noted an aurora had it  been present. Halley’s failure to find auroral sightings in the decades before 1716 is far from unique.