Pope Francis put out his pro-climate encyclical eight weeks ago, getting mass media attention, but the latest Gallop poll shows the people were not so enthused:

WASHINGTON, D.C. — Pope Francis’ favorability rating in the U.S. has returned to where it was when he was elected pope. It is now at 59%, down from 76% in early 2014. The pontiff’s rating is similar to the 58% he received from Americans in April 2013, soon after he was elected pope.

Is this about “climate change” — the encyclical has 245 paragraphs, 16 mentions of “climate”, 7 mentions of “carbon”, and more than 100 mentions of the “environment”. Moreso it reported around the globe as a “coup” on the climate issue by groups who normally think the Pope is wrong, silly and anachronistic. Furthermore,  the biggest change has come among Catholics, Protestants, and especially conservatives. But he’s less popular among liberals too.

The drop in the pope’s favorable rating is driven by a decline among Catholics and political conservatives, two groups that have been ardent supporters of the modern papacy. Seventy-one percent of Catholics say they have a favorable image of Francis, down from 89% last year. 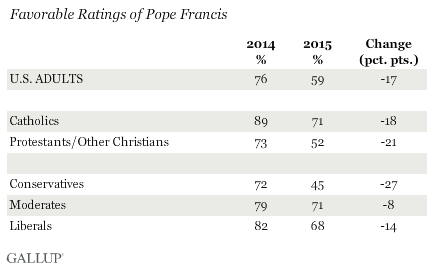 h/t to Heartland who deserve some credit here, having sent a team to the Vatican to draw attention to this issue.

The poll was a random survey of 1,009 people in the US. The margin of sampling error is ±4 percentage points at the 95% confidence level. The question: “Please say if you have a favorable or unfavorable opinion of Pope Francis — or if you have never heard of him”.

Did everyone miss the papal decree against Carbon trading?

190. Here too, it should always be kept in mind that “environmental protection cannot be assured solely on the basis of financial calculations of costs and benefits. The environment is one of those goods that cannot be adequately safeguarded or promoted by market forces”.[134] Once more, we need to reject a magical conception of the market, which would suggest that problems can be solved simply by an increase in the profits of companies or individuals. Is it realistic to hope that those who are obsessed with maximizing profits will stop to reflect on the environmental damage which they will leave behind for future generations? Where profits alone count, there can be no thinking about the rhythms of nature, its phases of decay and regeneration, or the complexity of ecosystems which may be gravely upset by human intervention. Moreover, biodiversity is considered at most a deposit of economic resources available for exploitation, with no serious thought for the real value of things, their significance for persons and cultures, or the concerns and needs of the poor.

The Pope was not able to explain why “market forces” were not the answer. He didn’t mention that sometimes free market forces work just fine with environmental problems, but they don’t when it’s a ubiquitous molecule central to life on Earth. In this case a free market is an impossible fantasy because most players can’t play — they are dogs, cats, yeast or the Pacific Ocean. Also it isn’t a real free market, because no one is “free” not to buy and governments control both supply and demand.