Globally, fires have been overlooked as a key player in the global CO2 cycle. Tom Quirk has dug up some studies showing that CO2 emissions from fires can be as high as half of the total emissions from human fossil fuel use. 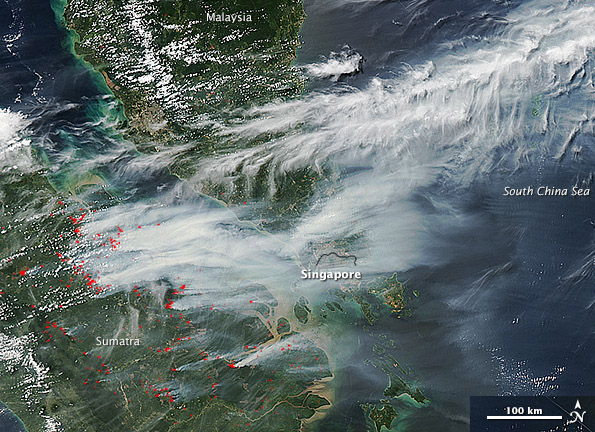 “In October and November 1997, the haze from fires in Indonesia spread as far the Philippines to the north, Sri Lanka to the west, and northern Australia to the south. In the Malaysian state of Sarawak on Borneo, there was a pollution index reading of 860.” | Annette Gartland

Peat deposits can be an extraordinary 20 metres thick. In 1997, a fire consumed 8,000 square kilometers of mostly peatland in Borneo. Researchers estimated 0.2 Gt of carbon were released in this one area that year, and that carbon emissions from fires across Indonesia in 1997 emitted between 0.8 and 2.5 Gt — or “13 to 40%” of the size of global human fossil fuel emissions.[1] Obviously uncertainties are large, but so are the numbers. It all makes the idea of a “carbon market” pretty meaningless: the largest players in this market can’t play and don’t pay. In carbon accounting, fires are “an act of God” (non-anthropogenic), and are considered neutral because the trees will grow back. But humans play a role in fire management and the regrowth…

Other researchers, der Werf et al 2004, looked at fires around the world during the El Nino year and estimated that 2.1 Gt of carbon was released — which explained 66% ± 24% of the extra CO2 emitted globally that year.[2] Bowman et al estimate fires produced emissions around 50% of the size of human emissions.[3] Murry Salby argues that ocean temperatures drive CO2 levels and the warmth of the El Nino in 1997 released more CO2, but here a lot of the extra CO2 released that year looks like it comes from fires.

We didn’t start the fire   (with thanks to Billy Joel)

This statement can be seen by looking at the estimates of fossil fuel emissions from the Carbon Dioxide Information Analysis Center (CDIAC), an agency of the US government. 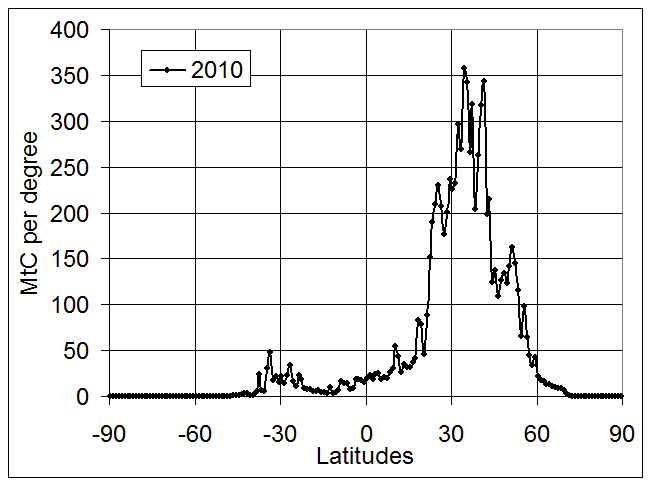 For the year 2010 CDIAC estimates 8,900 million tonnes of carbon (Mt C) in CO2 was produced world wide. Only 406 Mt C was produced in the Southern Hemisphere below a latitude of 120S. This is only 4.7% of the total global emissions.

There is an imbalance between Northern and Southern Hemispheres. The highest concentrations of atmospheric CO2 occur in the far North measured at Alert in Canada, 820N and Point Barrow on the north shore of Alaska 710N. The figure below shows the average difference of atmospheric CO2 levels at latitudes greater than that of the South Pole from 1994 to 2014. 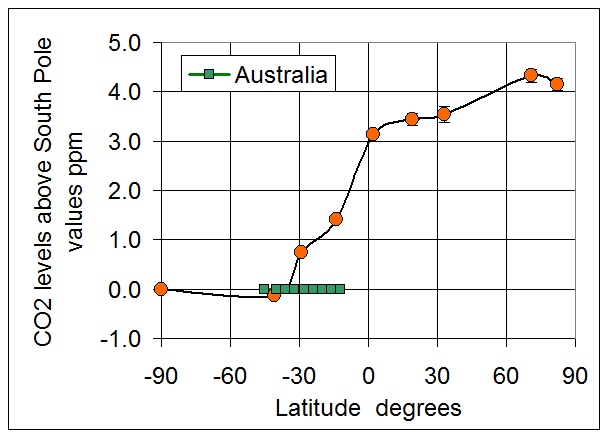 The conclusion is that not only are Southern Hemisphere and, in particular, Australia very small contributors to fossil fuel emissions but also the recipients of the overflow of CO2 from the Northern Hemisphere..

So will efforts to reduce CO2 concentrations from Southern Hemisphere continents have any effect on the Northern Hemisphere? Our only part in this is a very small contribution to the southern sinks of CO2 that might displace CO2 from the North..

*Figures here are in pure carbon terms. If we talk in terms of CO2 emissions rather than pure C, the numbers are 44/12 times higher.