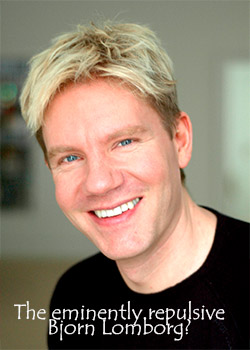 What’s scarier than an Endless Global Drought? The fear that the public might… hear from a skeptic. Skeptical arguments are so dangerous that even the whiff of one will kill a $4million dollar project stone dead at conception. Be Gone Freak! Guess who has no answer to the questions skeptics ask? How they do advertise the dire state of their intellectual ammo? You might think I’m exaggerating.  Bjorn Lomborg believes the IPCC science 100%, and uses the “denier” term to distance himself from the scientific skeptics. It’s like cloaking himself in garlic, except it doesn’t work — true believers still hate him and seek to shut him down.  Lomborg wants to stop fossil fuel subsidies, the arch-enemy in the believers world, and that’s not enough. Furthermore he wasn’t going to work at the Australian Consensus Centre and it wasn’t going to discuss the climate, but two steps of purification is not enough. Lomborg commits the unforgivable sin of wanting to spend enviro-gravy in ways that actually help the poor and protect the environment. He wants measurements and accountability. And that makes him “repulsive” — just ask the students of Flinders University. The modern University needs no logical reason, hate-mail is enough:

FLINDERS University students are “repulsed” by the prospect of a new policy centre associated with controversial Danish academic Bjorn Lomborg, who has long been accused of downplaying the dangers posed by global warming.

The university has been in talks with the Federal Government about establishing the Australian Consensus Centre, which would come with $4 million funding and base its work on Lomborg’s methodologies.

The University of Western Australia was to host the think tank, to be aligned with Lomborg­’s Copenhagen Consensus Centre and work in areas ranging from food security to social justice, but reversed its decision amid howls of protest from students and staff.

“I’m pretty repulsed by it,” she said.

“At this stage there seems to be no student or staff consultation. It’s right-wing junk. It was excellent to see him booted out of WA so hopefully the same will happen here.

Only purity of thought will do behind the fortress walls of Australian Universities. The panic caused by the possibility of a skeptical argument is so strong that Global Repulsion is called for, even against believers who dare suggest the IPCC are not Godlike in all their aims and decrees. I think all universities in Australia should be offered the Lomborg Test. Let’s send an offer to host the Consensus Centre at their University, and cancel future government support for all who refuse to allow diversity of opinion and debate on campus. What’s the scariest thing that could happen — the Lomborg Consensus Centre might issue a press release? But the howling at UWA was so successful in cancelling the Lomborg Consensus Centre, that it’s happening again. What chance would a skeptical scientist have of working at an Australian University? Right now the best thing that can happen to Australian Universities is for them to be privatized and a few new institutions set up. Without some serious academic competition here to show them up, the backward behaviour will go on. We need one sensible university to show the others what “Sensible” looks like.