Too much panic is never enough. Fran Kelly asks Stephen O’Brien, lawyer and UN official, about that the effects of climate change which are “already being felt”. She does not blink when his answer includes more frequent and more severe tsunamis. His qualifier…  It’s not a question of “if”, but “when”.

Yes, yes, this is “best and brightest” ideas from around the world, apparently.

Fran Kelly: “Give us a sense of the effects [of climate change] which are already being felt in our region and discussed at this conference.” (at 1 minute)

Stephen O’Brien: “The Pacific Region, and particularly the Pacific Island countries whose land, as you rightly say, are the ones just above sea-level, are the ones that really do have the greatest challenge when it comes to climate change effects on humanitarian need, with the regularity of cyclones, tropical storms, and tsunamis coming through [at 1.30 minutes]. It’s not a question of if, it’s a question of when. And we see that [these] effects of climate change seem to be exacerbated so that they are more frequent and even at times more severe…”

ABC gives free advertising for “the cause”

ABC staff are happy to ask loaded and leading Dorothy-dixer-type* science questions to people who have no scientific background, while pretending they are real journalists, then accept everything the interviewee says with dutiful nods. So O’Brien gets time to do his advertising, but if he gets “caught” mixing up his science, he’ll just say he’s not a scientist. No loss. Free marketing for “the cause”.

It’s not just poor journalism, it’s pravda-downunder. Lawyers-of-a-left-leaning get free gushing space, but when does the ABC ask any questions of actual prize winning NASA scientists, Nobel prize winners, geologists or meteorologists who hold differing views?  The problem is not that O’Brien is not a scientist, it’s the one-sided blind tilt — the ABiasC.  Fran Kelly is her own climate expert, she “knows” what the climate will do, and she won’t ask people who disagree with her views who are far more qualified than her or O’Brien. It’s easy questions for “friends”, and the Cloak of Invisibility for enemies.

If there is a trend in South Pacific Cyclones, it’s down.

All across the South Pacific, the trends for cyclones are flat. 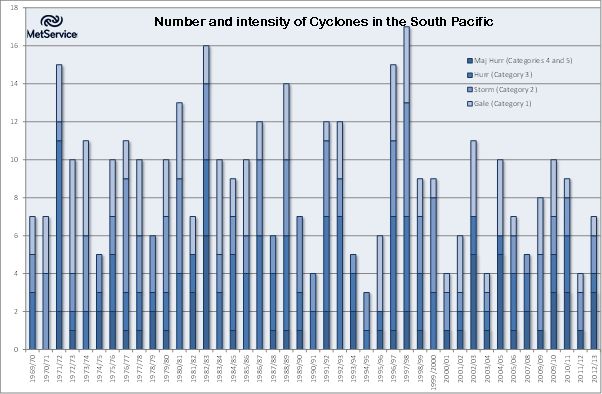 Number and intensity of Cyclones in the South Pacific | Source: Met Service Blog

It doesn’t matter what his qualifications are, anyone who pretends solar panels can stop tsunamis ought to be grilled.