Great news for Australians, Scandinavias, Greenlanders, Poms, and New Zealanders:  all the headlines about how your home will be the hardest hit were wrong. Instead, your real estate will be the most valuable on Earth and everyone will want to visit you.

Thank The Guardian for its restrained headline:  Countries most and least likely to survive the effects of climate change . Study source: Diply 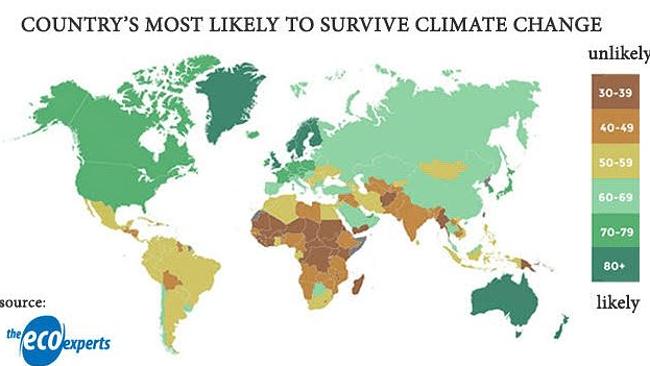 I expect you will all be relieved. Especially after the fear you felt reading “hardest hit” headlines like these:

“Sydney’s urban areas to be hit hardest by global warming”

“Predictions Australia will be hardest hit by climate change”

“…climate change is likely to have the strongest impact on Scandinavian countries such as Denmark, Norway and Sweden.”

— Thanks to ClimateChangePredictions  and Tom Nelson’s hardest hit list.

The original map on Diply also has a “least at risk” category, helpfully colored black and applied to no country. That figures, nowhere is “least at risk” for climate change. Perhaps that category is for the moon? (But not Jupiter, Mars or Pluto, don’t move there.)

But after the relief comes the guilt

You, lucky sods in rich nations, caused the problem and now you must pay. But of course, that penance money doesn’t go to poor farmers or businesses in Africa directly, it goes straight to the UN where convoys of bureaucrats make a good living. (Dare I suggest that the best way to help Africa is not with big governance payments that end up going through corrupt dictators, but with a thousand deals going straight to small businesses? Bring on free trade.)

What Africa desperately needs is cheap energy to run fridges, cook dinner, clean water, and transport fresh food. Not more bureaucrats, money-hungry-windmills, and not sea-walls to hold back a 1mm a year sea level rise.

The top 10 most likely to cope

The solution always involves money being transferred through “world leaders”:

“With climate change described as one of the greatest challenges of our time, the impacts of destructive changes in temperature, rainfall and agriculture will affect every country. These findings highlight the need for richer, more technologically advanced nations to help less developed countries,” said Whiting.

“Ultimately there will be no winners from the effects of climate change, every country will be impacted in some way. Just how much depends on the decisions made now by world leaders.

In terms of media and marketing, this “who will survive” article is there to instill guilt. Other headlines about how (insert your location) is going to be “hardest hit” are there to instill fear. (If only there were media articles trying to “provide information”.) Still we can always point out the hypocrisy when the guilt game conflicts with the fear.