The Pause has been unfound, not with new data, but with new adjustments in one odd dataset.

The awkward “Pause” in global temperatures shows up in every major dataset. It’s the reality that conflicts with nearly every major climate model. But it’s there in the Hadley records of land surface and ocean, it shows up in the Hadley sea surface measurements, it’s there in NCDC, GISS, and of course in the satellite data of RSS, and UAH, and it shows up in the best data we have on the ocean, the ARGO buoys. It’s quite the challenge to unfind it!

(Thanks to Ross McKitrick for the individual graphs)

To find global warming in the last 15 years, we need to ignore all that and use sea surface data blended from boats randomly trekking through shipping lanes with buckets and from ocean buoys (and that’s not ARGO buoys). But even that isn’t enough, that original data needs to be adjusted, and where sea ice gets in the way, gap-filled from sparse land data (as you would right?). Then we need to accept a lower-than-usual significance test, and carefully cherry pick the time periods to blend the past rapid warming with past cooling, so we can say we’ve found the holy grail, a quasi significant slight “warming trend” in data adjusted with a wildly uncertain correction estimate. And Professor Matthew England likes this kind of science.

Ross McKitrick points out that to get the new NOAA sea surface data they added 0.12 °C to the buoy readings, to make them more like the ship data. That magic number came from Kennedy et al. (2011) where  the uncertainty was reported as (wait for it) 0.12 ± 1.7°C. (Which is like saying there is definitely one apple here, give or take 17 apples. So this is what 95% certainty looks like?). Worse, that uber-extremely-uncertain-number was supposed to be used to adjust the ship data down so it was closer to the buoys.  The authors felt the buoys were more accurate than bucket-from-ships. Even Karl et al paradoxically agree (have cake, eat cake), saying that because the buoy data is better, it should be weighted higher. In this fashion, the best data can get adjusted the most, to make it more like the bad data, then it can count for more. This is Double-Good-Science!  Thanks to Ross McKitricks comments on Karl et al 2015 for details (1K PDF).

Here’s how this dubious chain of uncertainty and assumptions plays out in the media:

Professor Matthew England, Chief Investigator at the ARC Centre of Excellence for Climate System Science at UNSW, said the findings were no surprise.

“There’s nothing all that new in this paper and nothing that surprises me,” Professor England said.

Who is the denier then? The person who recognises the obvious results in all the major data sets, or the person who is “not surprised” when a contrived adjusted concoction of not-good data produces a result he expected? (Well really, who at this late stage is really surprised by the recent try-on?)

This is so desperate even other fans of the global warming theory are not buying it. They have some standards. They know the global temperature pause is real:

“The slowdown hasn’t gone away, however,” and  “The results of this study still show the warming trend over the past 15 years has been slower than previous 15 year periods.”

Prof Tim Osborn, Professor of Climate Science at the University of East Anglia, said he would caution against dismissing the slowdown in surface warming on the basis of this study, nor to downplay the role of natural decadal variability for short-term trends in climate.

“There are other datasets that still support a slowdown over some recent period of time, and there are intriguing geographical patterns such as cooling in large parts of the Pacific Ocean that were used to support explanations for the warming slowdown,” Professor Osborn said…  (h.t to Waxing Gibberish).

[Reuters] “Some other experts said however the idea of a hiatus was still valid, since warming had probably slowed this century if compared to fast rates in the 1980s and 1990s.

“It is curious that a comparison with these decades was not included in this new study,” said Richard Allan, a professor of climate science at the University of Reading. (h/t Barry Woods)

In the endless quest to make reality fit the models, the adjustments to data have become their own parody. What is “evidence” anymore? Evidence schmevidence.

Seven steps to unfind the Pause?

@NOAA ‘s desperate new paper: Is there no global warming ‘hiatus’ after all? –  WUWT

Anthony Watts and Bob Tisdale have some eye watering graphs on temperature adjustments. Get a load of this: 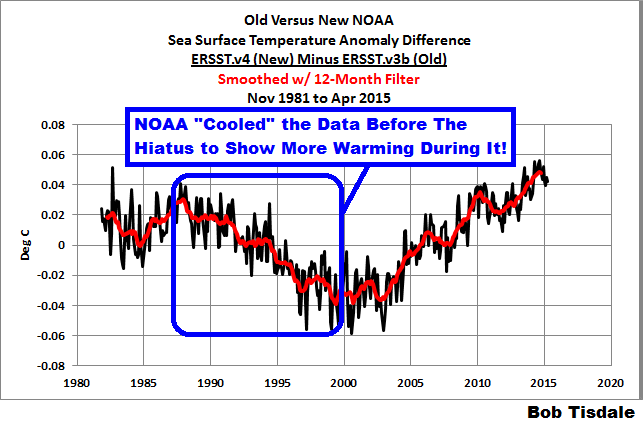 Adjustments to sea surface data cool the late 1990s, and warm the last ten years. | Thanks to Anthony Watts and Bob Tisdale.

This is a fairly standard form of adjustment — cool the past, warm the present. Smooth the bumps.

From Anthony Watts we can see how USA thermometers were all biased to warm until WWII, then biased too cold. (Luckily someone at NOAA knew what the thermometers of 1915 should have read, and “fixed” them decades later. Scientists were pretty stupid in the early 20th Century, eh? Silly old Einstein.)

Figure 4 Maturity diagram showing net change since 17 May 2008 in the global monthly surface air temperature record prepared by the National Climatic Data Center (NCDC), USA. The net result of the adjustments made are becoming substantial, and adjustments since May 2006 occasionally exceeds 0.1oC. Before 1945 global temperatures are generally changed toward lower values, and toward higher values after 1945, resulting in a more pronounced 20th century warming (about 0.15oC) compared to the NCDC temperature record published in May 2008. Arrows indicate two months where the adjustments over time are illustrated in the figure below. Last diagram update: 19 May 2015. Source: Professor Ole Humlum

The desperate lengths of the Team to find some recent warming says a lot about how important the pause is.