According to a new study released by Nature Climate Change we are, remarkably, at the very peak of conditions for wheat growth worldwide — and it’s all downhill from here. (What are the odds?) The last 15 years, which have been the “hottest on record” and saw massive human CO2 output, were the peak time for wheat. But all that is about to fall off a cliff if we do … more of the same.

To demonstrate that millions will starve: take projections of extremes from broken climate models, and put them in wheat crop models, and then assume we take no adaptive measures for the first time in human history. Ignore that even the IPCC doesn’t think extreme events are necessarily changing: “Climate models are unable to predict extreme events because they lack spatial and temporal resolution. In addition, there is no clear evidence that sustained or worldwide changes in extreme events have occurred in the past few decades. “

There’s been no increase in drought globally in the last 60 years either. Pouring free fertilizer into the sky, along with better agricultural practices, has produced a global boom in crops (See CO2science for scores of studies on biomass gain, and photosynthesis). But from now on it’s doom, gloom and pain — even though in a warmer world the air will be more humid and the temperatures more stable (the extremes of hot and cold happen under clear sky conditions). Nevermind. Give me another grant.

See this graph? It’s all over, the crash is coming, you better believe it. Nature Climate Change says so: 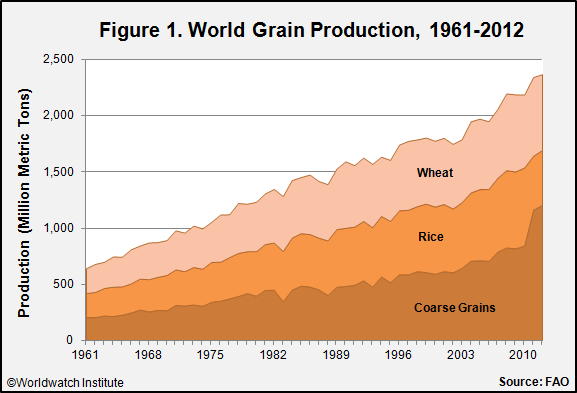 Climate change may dramatically reduce wheat production, study shows recent study involving Kansas State University researchers finds that in the coming decades at least one-quarter of the world’s wheat production will be lost to extreme weather from climate change if no adaptive measures are taken.

Vara Prasad, professor of crop ecophysiology and director of the USAID Feed the Future Sustainable Intensification Innovation Lab at Kansas State University, is part of a collaborative team that found wheat yields are projected to decrease by 6 percent for each degree Celsius the temperature rises if no measures to adapt to extreme weather fluctuations are taken. Based on the 2012-2013 wheat harvest of 701 million tons worldwide, the resulting temperature increase would result in 42 million tons less produced wheat — or a loss of nearly one-quarter of the current wheat production.

“It’s pretty severe,” Prasad said. “The projected effect of climate change on wheat is more than what has been forecast. That’s challenging because the world will have to at least double our food supply in the next 30 years if we’re going to feed 9.6 billion people.”

For the study, researchers systematically tested 30 wheat crop models against field experiments from around the world that were conducted in areas where the average temperature of the growing season ranged from 15 to 32 degrees Celsius. The models accounted for planting dates, planting rates, temperatures and other crop management factors.

With the models, researchers were able to look at the effects of temperature stresses on wheat and predict future changes based on temperature changes.

“Extreme temperature doesn’t only mean heat; it also means cold,” Prasad said. “Simply looking at the average temperature doesn’t really show us anything because it’s the extremities that are more detrimental to crops. Plants can handle gradual changes because they have time to adapt, but an extreme heat wave or cold snap can kill a plant because that adjustment period is often nonexistent.”

Researchers also found that increasing temperatures are shortening the time frame that wheat plants have to mature and produce full heads for harvest, resulting in less grain produced from each plant.

“It’s like having one minute to fill a tall glass with water. Under optimal conditions, we can fill that glass pretty well,” Prasad said. “But now we’re factoring in extreme temperatures that are affecting the growing window and the grain size. So it becomes like trying to fill that same glass, but now we only have 40 seconds to do it and the faucet is running slower.”

Currently, Prasad and colleagues at Kansas State University, in collaboration with the university’s Wheat Genetics Resource Center, are using growth chambers and heats tents to quantify the effects of temperature. The data will help in refining the crop models so that they can be more accurate in predicting wheat responses.

Their work will help scientists develop more robust models that can help farmers globally select more weather-tolerant and resilient wheat varieties based on their location. Additionally, farmers can determine the optimal planting date to avoid stress and minimize possible exposure to extreme weather events, such as heat and cold snaps, during the growing season.

I’m sure better crop models are good, but what farmers need more than anything are climate models that predict the climate.

Oddly enough, if the current temperature plateau were to end and then cool rather than warm, grain production would presumably fall too because the area of arable land would decrease — marginal wheat land in Canada and Russia will be reclaimed by the frosts and shorter seasons. Either way, apparently, wheat production is going down. “We’ll all be rooned”, said Hanrahan.
UPDATE: The scares about “Peak Grain Production,” are used to generate many headlines, including the latest and most preposterous — like how there will be no more beer chocolate or coffee either!
9.2 out of 10 based on 68 ratings