David Archibald points at a very interesting paper that suggests that children conceived during solar activity peaks were less likely to survive and had a whopping 5 year deduction from their lifespan. But don’t panic if you were a peak baby, the affected people were born to poorer women in Scandinavia in the 18th and 19th century. Mortality was 8% in the first year. One in twelve babies didn’t make it. Things were different then. Richer women were somehow able to compensate, or repair the damage. The authors seem fairly sure it has something to do with UV, but I’m not convinced. Solar effects include magnetic effects, solar wind, neutron bombardment, and cosmic rays. There are plenty of things to choose from. Lots more papers to come on this.

Marvel that the sun might influence our lifespan and fertility, but not “do much” to the climate. ;- )

There is much to discuss in comments — many of us wondered if there is a dietary connection, but this effect does not seem to be due to famine, or less food (wheat was cheaper at solar maxes).

It is now more than 20 years since David Juckett and Barnett Rosenberg published their paper “Correlation of Human Longevity Oscillations with Sunspot Cycles” in the journal Radiation Research.  They had found an interesting correlation between the level of solar activity at birth and lifespan, with lower solar activity resulting in longer lifespans.  From the abstract of that paper:

“An examination of past human mortality trends revealed that the mean longevity of birth cohorts from 1740 to 1900 for United States of America (U.S.) Congressional Representatives exhibited oscillations that coincided with the 9- to 12-year sunspot cycle. Cohort mean longevities were 2-3 years greater during times of low sunspot activity than at peak activity. This phenomenon was confirmed in data from members of the House of Commons of the United Kingdom Parliament and from University of Cambridge alumni. An additional longevity oscillation with a longer period was visible in the data and may also be related to sunspot cycles.”

A new paper on this subject has just been published by the Norwegian trio of Gine Skjaero, Frode Fossoy and Eivin Roskaft in the journal Proceedings B of the Royal Society: “Solar activity at birth predicted infant survival and women’s fertility in historical Norway”.  From the abstract of that paper:

“Using data on temporal variation in sunspot numbers and individual-based demographic data (N 8662 births) from Norway between 1676 and 1878, while controlling for maternal effects, socioeconomic status, cohort and ecology, we show that solar activity (total solar irradiance) at birth decreased the probability of survival to adulthood for both men and women. On average, the lifespans of individuals born in a solar maximum period were 5.2 years shorter than those born in a solar minimum period. In addition, fertility and lifetime reproductive success (LRS) were reduced among low-status women born in years with high solar activity.” 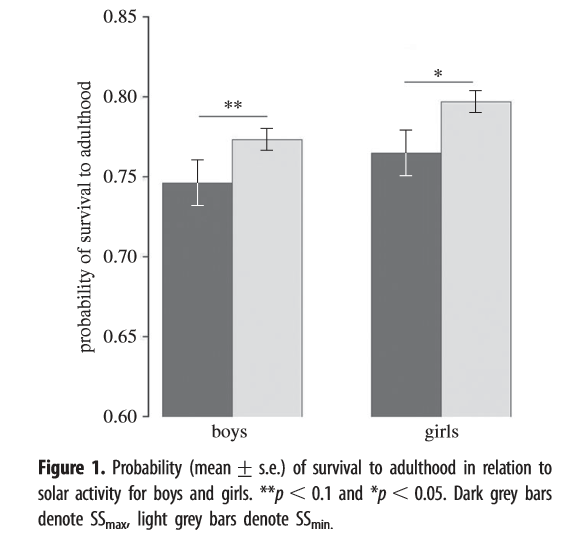 Relative to the Biblically allotted span of three score years and ten, a 5.2 year reduction in average lifespan relative to those born during solar minimum is 7.4% shorter.  What is new about the Norwegian study is that they also looked at the effect on female fertility.  On top of lifespan, being born in a solar maximum period also significantly reduced fertility for women born into the poor category, but not for wealthier women or for men.  The effect of socio-economic status on the relationship between solar activity and fertility suggests that high-status pregnant women were better able to avoid the adverse effects of high solar activity. 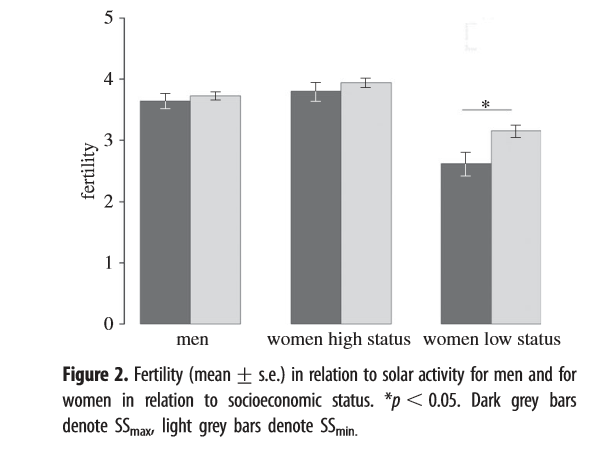 The paper speculates that the effect is due to degradation of the B vitamin folate by ultraviolet radiation.

The Scandinavian region has a lot of good population records and follow-up research on such a profound effect can be expected.