You’ll be shocked that after decades of studying 800 year old tree rings, someone has finally found some trees living as long ago as 2005. These rarest-of-rare tree rings have been difficult to find, compared to the rings circa Richard III. The US government may have spent $30 billion on climate research, but that apparently wasn’t enough to find trees on SheepMountain living between the vast treeless years of 1980 to now.

I’ve always thought it spoke volumes that many tree ring proxies ended in 1980, as if we’d cut down the last tree to launch the satellites in 1979. We all know that if modern tree rings showed that 1998 was warmer than 1278, the papers would have sprung forth from Nature, been copied in double page full-fear features in New Scientist, and would  feature in the IPCC logo too.

Ponder that the MBH98 study was so widely cited, repeated, and used ad nauseum. It was instrumental in shaping the views of many policy makers, journalists, and members of the public, most of whom probably still believe it. The real message here is about the slowness of the scientific community to correct the problems in this paper.

Steve McIntyre has been asking for an update since 2005. He has the details of the new paper by Salzer, and produces this devastating graph below. The black line is MBH98 – the Michael Mann curve of Hockeystick fantasy. The red line is HadCRU (the Hadley best guess of surface temperatures, from surface thermometers and computers). The droopy green line is the Graybill chronology to 1987, while the blue lines are the updates to the SheepMountain series of tree ring “temperatures”. Oops. 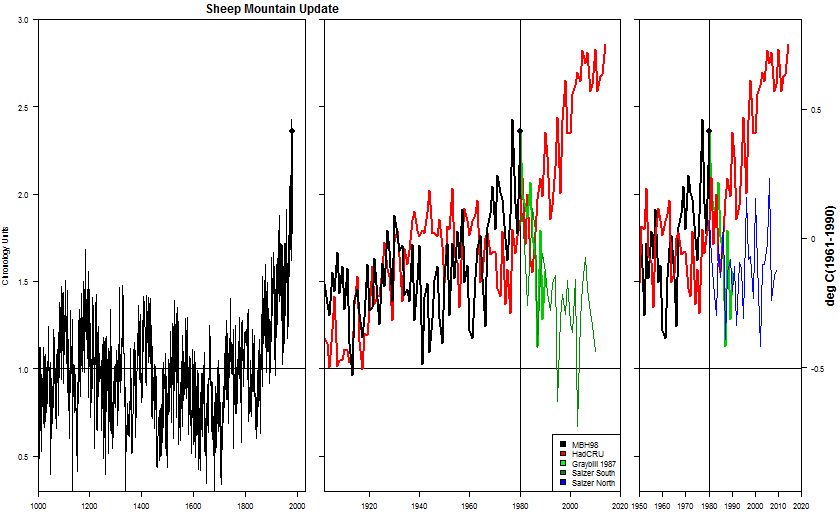 The  obvious message is that these particular proxies don’t work now and probably never did, and that this hockeystick shape  depends on not using tree rings after 1980.

More important than the details of one proxy, is the message that the modern bureaucratized monopolistic version of “science” doesn’t work. Real scientists, who were really interested in the climate, would have published updates years ago. (Indeed, would never have published the hockeystick graph in the first place. Its dysfunctional combination of temperatures and truncated proxies is mashed through a maths process so bad it produces a hockey stick most of the time even if the data is replaced by red noise.)

The screaming absence of this obvious update for so long is an example of what I call the “rachet effect” in science — where only the right experiments, or the right data, gets published. It’s not that there is a conspiracy, it’s just that no one is paid to find the holes in the theory and the awkward results sit buried at the bottom of a drawer for a decade.  The cortex soaked in confirmation-bias couldn’t figure out how to explain them.

The new results of Salzer et al 2014 (though not candid on the topic) fully demonstrate this point in respect to Sheep Mountain.  In the warm 1990s and 2000s, the proxy not only doesn’t respond linearly to higher temperatures, it actually goes the wrong way.   This will result in very negative RE values for MBH-style reconstructions from its AD1000 and AD1400  networks when brought up to date, further demonstrating these networks have no real “skill” out of sample.

We’ve also heard over and over about how “divergence” is limited to high-latitude tree ring series and about how the Mann reconstruction was supposedly immune from the problem.  However, these claims mostly relied on stripbark chronologies (such as Sheep Mountain) and the validity of such claims is very much in question.

As previously discussed on many occasions, stripbark chronologies have been used over and over in the canonical IPCC reconstructions, with the result that divergence problems at Sheep Mountain and other sites do not merely impact Mann et al 1998-99, but numerous other reconstructions.  Even the recent PAGES2K North America reconstruction uses non-updated Graybill stripbark chronologies.  It also ludicrously ends in 1974.  So rather than bringing the Mann et al network up-to-date, it is even less up-to-date.

Note that bristlecone pines were never supposed to be used as climate proxies anyway. They are a rather unusual species — their growth was thought to be CO2-limited rather than limited by temperature or moisture, so they responded well at first to the increase in CO2 in the 20th century, though obviously something else is going on after 1980. This graph and these results apply only to one situation — not all tree rings. But the  failure of review applies to the whole scientific community.

The IPCC adopted the hockeystick for their logo shortly after Mann produced it, but long since dropped it. Where was the all-marvelous, hallowed, IPCC “expert” review?