The list goes on, and there is more to come.

In Deniliquin NSW, the homogenisation has lifted both the maxima and minima trends — again converting cooling to warming.

Graham Lloyd continues to increase the pressure on the Australian Bureau of Meteorology. In answers to Lloyd the BOM could only defend their work with the extraordinary statement that while some trends at individual stations look anomalous, overall the results “showed a similar warming trend to that of other inter­national climate ­organisations. ”

So they inadvertently admit that they expect Australian trends to look like trends in other parts of the world. Despite the fact that Australia is drier, flatter and surrounded on every edge by oceans, the Bureau would consider it a fail if our trends were different to others? We’re in the opposite hemisphere to many international climate organizations, which may or may not matter, but we’ll never find out if we are trying to fit our data to theirs. And El Nino’s and La Nina’s mean very different things to countries on opposite sides of the Pacific. We’re blurring the resolution from thousands of data-points. The raw data is blended not just on regional scales but thanks to mindsets, on international scales too. It’s Groupthink, or should we call that Climate Freud at work? 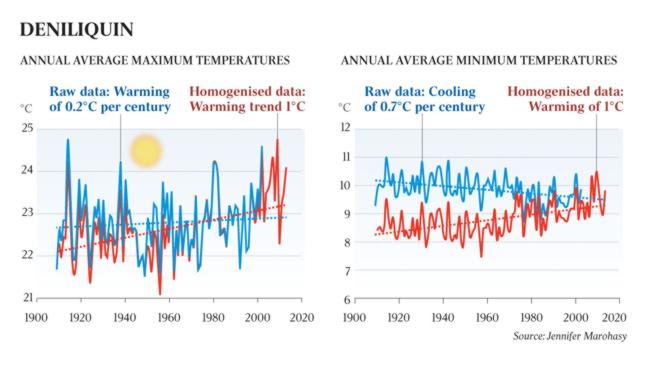 Both Maxima and Minima trends have changed after BOM homogenization.

SOME of Australia’s long-term temperature records may contain faults introduced by the Bureau of Meteorology’s computer modelling, according to a widely published expert.

David Stockwell said a full audit of the BoM national data set was needed after the bureau confirmed that statistical tests, rather than direct evidence, were the “primary” justification for making changes.

Dr Stockwell has a PhD in ecosystems dynamics from ANU and has been recognised by the US government as “outstanding” in his academic field.

We need a full audit of the data, just as we requested with Senator Cory Bernardi in the Senate three years ago:

Dr Stockwell has called for a full audit of ACORN-SAT homogenisation after analysing records from Deniliquin in the Riverina region of NSW where homogenisation of raw data for minimum temperatures had turned a 0.7C cooling trend into a warming trend of 1C over a ­century.

The bureau said it did not want to discuss the Deniliquin findings because it had not produced the graphics, but it did not dispute the findings or that all of the information used had come from the BoM database.

Surely the BOM has more to say than this?

It has said that while some ­stations may show anomalous ­results, the overall record showed a similar warming trend to that of other inter­national climate ­organisations.

Given the large adjustments made in the USA, we can only wonder if other international agencies are justifying their adjustments because they fit with other nation’s “adjustments”?

Dr Stockwell does not suggest that the bureau tampered with the Deniliquin data but that the ­bureau may have placed too much trust in computer modelling.

“The discontinuity at Deniliquin is not seen in the raw data and so must have been introduced by the homogenisation process,” he said.

Read it all at The Australian

Caveats that need to be said: Some station data definitely needs adjustments — preferably on a station by station basis with documentary evidence and statistical demonstration of discontinuities. Note that Deniliquin is not like Rutherglen in that there are recorded moves. Though Deniliquin is like Rutherglen in that the raw data showed cooling trends in minima for both.

Deniliquin (074258/074128)
The current site (074258) is an automatic weather station located in flat terrain over natural grass at the Deniliquin Airport, about 4km south of the town and well clear of the urban boundary.
History
The original site (074128) was located in the town area, with the site becoming built up from about 1950 onwards. The site moved 1 km northwest in September 1971, then moved to the airport (3.7km south) in September 1984. Temperature observations continued at this location until 2003. The site number continues to be used for rainfall observations but these are made at a different location.
The current site is about 500 m south of the last position of the previous site. It has been operating since May 1997.

Behind the scenes emails are abuzz among the independent BOM audit team at the moment, and it’s remarkable how quickly they are being converted into the media stories. Kudos on Deniliquin especially David Stockwell and Chris Gillham. (Plus Jennifer Marohasy too of course).

Cheers, here’s to all the quiet heroes digging through data — Thanks to their efforts we may eventually get some accountability and a better national database.

Commenters please be careful with remarks — especially about motivations.

* Credit with thanks to Markd for Climate Freud 🙂