UPDATE Sat morning: Thank goodness this has slowed dramatically. Now Cat 1 at 120 km/hr. 990hPa. While some have lost homes, there don’t seem to be any lives lost, though rainfall and storm surges mean the situation is still dangerous.  Courier Mail appears to have the best live coverage.

About midnight, last night Queensland time, Cyclone Ita crossed the coast. . Hopefully it will pass through a less developed region. It potentially could be disastrous. We hope not. It is about 500km across (?) while Cyclone Yasi was 600km wide.  Winds were nearly 300km per hour but have slowed to km/h  205km/h. One meteorologist predicts it to slow to Category Four as it makes landfall. [He was so right, it’s now a Cat 3]. 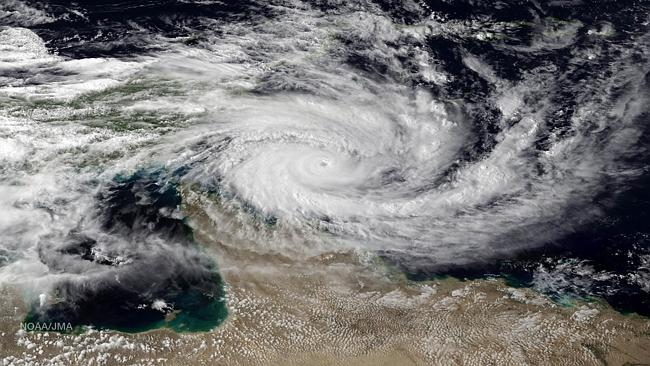 Cyclone Ita is currently Category 1 bearing down on the region around Cooktown and Cairns in North Queensland.

Spare a thought for those in the path. We hope everyone can stay safe.

The “great unknown’’ is the devastating havoc that 300km/h winds will wreak on top of a 2m-high storm surge, 10m-high waves, a high tide and flash flooding predicted in the Endeavour River.”

The last and only cyclone of this extremely destructive force was Cyclone Mahina in 1899 when a 14.6m tsunami swept 5km inland as it made landfall in almost the same predicted track of Cyclone Ita near Cape Melville.”

Port Douglass is “expected to receive 600mm of rain over the next 48 hours.”