I sense much gnashing of teeth. There seems to be nothing a reasonable social-science communicator can do. If they write like conservative scientists, the public don’t worry enough, if they load on the fear and guilt, people turn off. They can hammer the anti-science notion of consensus, which seems to work a treat in inept five minute surveys, but “the consensus” has been all over the press, in school, and in documentaries, yet (wail and weep) the polls of public alarm are still sliding! The media is even less interested. (See Figure 1 below). 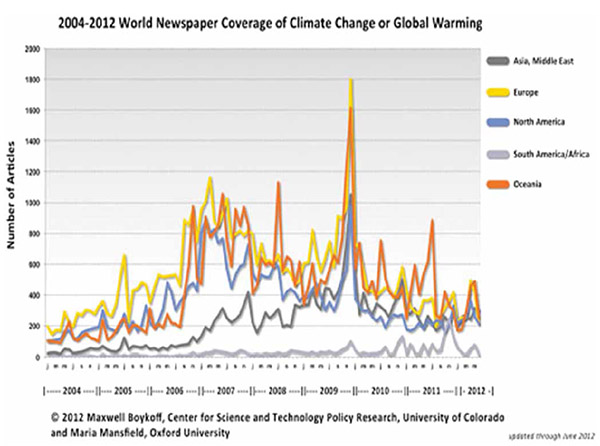 There plots the rise and fall of climate in the media. (Figure 1 in this paper).

For the last few years the media have tried showing a lot more high-gloss posters of floods, cyclones and cracked earth, and that is not working either. It doesn’t seem to matter if we show disasters-away with stoic Sudanese or disasters-at-home with suffering suburban mortgagees, the public disengage.

Here Nerlich and Jaspal use “visual thematic analysis” (a technical word for looking at pictures and saying things about them) and publish a paper in a journal with the unlikely title “Science As Culture“.

It appears the social science communicators have studied every angle, every image, and every style of communication. What they haven’t done is study their own assumptions. Because, speaking with my science communication hat on, there is a light at the end of this dark tunnel of confusion. What if global warming isn’t due to humans much? Then it doesn’t matter how the story is told, the public won’t ever “get” the message because the message is wrong and the public are not that stupid. They just don’t want to be browbeaten.

What if 53% of the public (like in Australia) or 62% of the public (that would be the UK) just don’t buy the idea because it isn’t true? What if half (and growing) of the public recognize that name-calling “denier” is not a scientific term? Could it be the people remember that the same mob who said “children won’t know what snow is”  are now saying “global warming brings more snow”? Ditto for droughts; “here comes a flood”.  And it goes double for the warming trend we didn’t get. (Where did that missing heat go?) It takes years of university education to learn to ignore these contradictions.

This situation is just the boy who cried wolf. It doesn’t matter how he cries, what matters is whether there is a wolf.

Message to the Brits – you did pay for these visual thematic insights into IPCC propaganda through the ERSC. It’s possibly the most light-weight paper I’ve ever seen — academic air-ware. Instead of spending money researching better ways to hammer a false idea into the public consciousness, why don’t we try to hammer logic and reason into schools and  universities?