William Kininmonth essentially says that it’s possible that the trade winds have changed the climate, but asks why the winds themselves changed. Kininmonth explains that the ocean is much larger and holds much more heat than the atmosphere, and that the ocean drives the winds rather than the other way around. He points out again (as he did before here so eloquently in more detail) that what the paper describes is what we’ve known for a long time about the ENSO patterns and the Pacific Decadal Oscillation (PDO): when an El Nino Strikes, trade winds fall, ocean surface doesn’t turn over as much, the ocean surface is warmer, and the air stays hot above. When La Nina’s occur, trade winds speed up, the ocean stirs, and the cold deep water takes the heat out of the surface of the ocean and the air above.

Chief of Australia‘s National Climate Centre at the Bureau of Meteorology from 1986 to 1998.

An international research team has published an explanation for the recent stasis in global temperature rise but leaves essential questions unanswered. Variation of Pacific Trade Wind speeds may well be linked to changing global temperature, as argued.  Why then did the wind strength vary? The given explanation of ‘natural variations’ is neither scientific nor convincing.

Trade Winds over the Pacific

I have read the England et. al. paper and made some independent checks using data available from the US NOAA National Centre for Environmental Prediction (NCEP) since 1948 (from the international reanalysis project). The basic data in the paper checks out:

The Pacific Trade Winds have increased then decreased over recent decades. (Note easterly trade winds have a negative sign and hence increasing negative is a strengthening trade wind – surface stress is approximately a function of the square of the wind speed and is amplified with increasing wind speed. 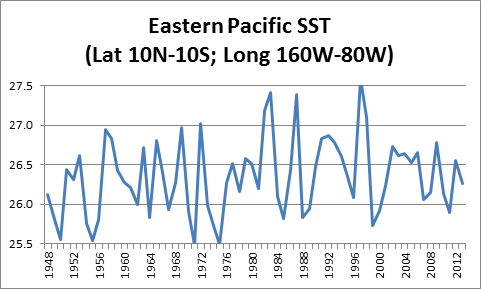 The sea surface temperatures of the eastern equatorial Pacific have slightly warmed then cooled although there is significant year-to-year variability that tends to mask the evolution. 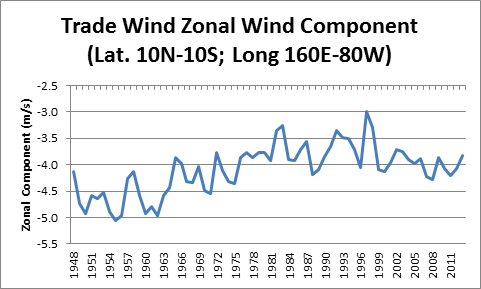 England et. al. noted that data prior to the satellite era (about 1979) should be treated with caution but nevertheless the essential form of the records fits with their description, especially post-1979. 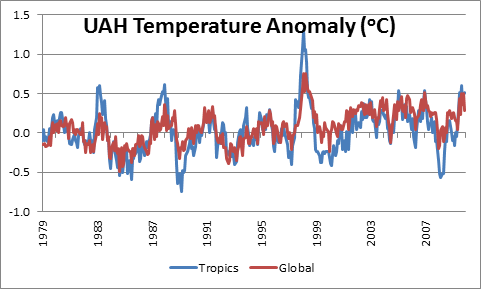 The tropics warms during El Nino years, and cools during La Ninas.

The Ocean drives the Air

The issue with the England et. al. paper is the claim that the strengthening of the Trade Winds is the cause for the cooling over the eastern Pacific. The inter-annual ENSO (El Nino/Southern Oscillation) events have their origins in the ocean circulations and the effect of these changes is transmitted to the atmospheric circulation; it is the atmosphere that responds to the ocean and not vice versa.

The cold water of the ocean interior is maintained by: 1) sinking cold saline water under growing winter sea ice in polar regions to form Bottom Water; and 2) Ekman turning associated with the high latitude westerly winds that forces cold surface water under the warmer tropical waters to form Intermediate Water. Both these processes result in gently rising water under the tropical thermocline. As the water mixes upward across the thermocline it takes heat out of the tropical surface layer at a rate of about 20-25 W/m2, a significant fraction of the solar radiation absorbed over the tropical surface. It would be surprising if the overturning circulations to form Bottom and Intermediate Water were at a constant rate, given the complexity of ocean circulations. Changes in ocean overturning circulation of about 5% on multi-decadal timescales could easily explain the slowly changing surface temperatures that have been observed, and hence the changes in the Trade Wind strength.

What “internal variability” gives, it can take away

The IPCC metaphorically painted itself into a corner when, in its 2001 3rd assessment, it claimed that based on computer models the climate system had only limited internal variability (ocean-atmosphere interactions producing decadal and longer oscillations, including of global temperature). If there is little internal variability then the reproduction of 20th century using computer models with only carbon dioxide and known natural forcings is a seemingly plausible explanation for the warming trend of the 20th century; it also provides an estimate of the sensitivity of global temperature to carbon dioxide forcing. In contrast, if there is significant internal variability on all timescales from the inter-annual ENSO to multi-decadal (and possibly centennial) then the influence of carbon dioxide is much less than the models show – the reproduction of 20th century temperature is as much judicial curve fitting and is a misleading explanation of what was driving climate and global temperatures during the 20th century.

The England et. al. paper underscores that the science of climate change is far from settled.

UPDATE: I’ve posted my thoughts on this paper here: http://joannenova.com.au/2014/02/global-wind-excuse-monkey-modeling-shows-global-warming-theory-is-still-not-wrong/