A new paper shows that sea levels rose faster in the ten years from 1993-2003 than they have since. Sea levels are still rising but the rate has slowed since 2004. This does not suggest that the missing energy from the atmosphere has snuck into the ocean, but rather that the oceans and the atmosphere were both warming faster in the 1990’s, then as coal power ramped up in China and billions of tons of CO2 was released, both the atmosphere and the ocean did not gain more energy per year, but less. That message again — something else appears to be the main driver the climate, not CO2.

This paper discusses and graphs total sea level rise, steric sea level rise and the global mean ocean mass. The Steric Sea Level is the part of the rise due to warming and salinity changes, so it best represents changes in ocean heat content. The total rise also includes water coming or going due to changes in glaciers, run-off, ice,  evaporation and rain. GRACE data measures only the changes in gravity, which is caused by changes in water mass. Jason/Topex altimeter satellites measure the total sea-level changes and the steric component is calculated from the altimitry and GRACE data. I chose only the steric sea level graphs here, but the total sea level graphs and ocean mass graphs are also available in the paper.

All this comes with the caveat that inasmuch as most experts accept that seas were rising by 3mm a year in the 1990’s, the raw satellite data showed next to nothing until it was adjusted. Hence the rate changes discussed in this paper could be an artefact of those adjustments. Sea levels might not have slowed their rate of rise, it may be that it was not rising very quickly in the first place, and is still not rising very fast. Either way, it doesn’t support the theory that pumping out CO2 makes much difference.

That said, the change is most obvious in Figure 1b.

Figure 1b The global mean steric sea level (GMSL) with the ending date changing from 1 to 24 months earlier relative to December 2012 (bottom panel, thin lines end with the color from red to yellow). The IMFs of each time series, corresponding to the high-frequency noise, the annual
cycle, the interannual variability, and the trend function (see text), are given as the colored lines in the panels from top to bottom, respectively. The ensemble mean of the IMFs on the different time scales during 1993-2010 are given as the thick black solid line in each panel. The colored bar in the third panel is the normalized Nino 3.4 index with arbitrary amplitude. The statistical confidence interval of the trend function is given by gray shadow in the bottom panel. The data is in units of cm.

The details of the rate of change:

Here’s the clincher… the cause of the change in the rate was mainly due to the shift in the PDO (Pacific Decadal Oscillation):

Comparison between the [Global Mean Sea Level], the global mean steric sea level, and the global mean ocean mass indicates that the decreasing of the rising trend is mainly due to the stalled ocean heat content which started in the early 2000s, when the PDO switched from the warm polarity to cold polarity…

The changes are apparent in figure 5b below — this is the average steric sea level rises before and after 2003. A large section of the central Pacific seems to have shifted from gaining heat before 2003 to losing heat in the last decade. 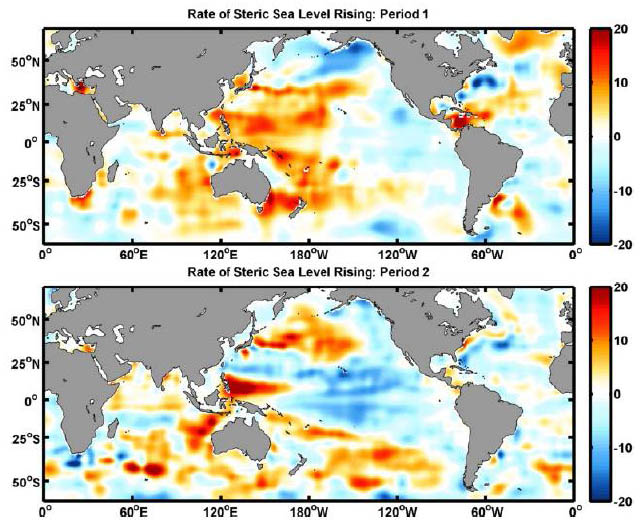 Over the last 20 years the oceans have been gently expanding sometimes at faster rates and sometimes slower. Note this graph is the rate of the change in the rate… not a simple graph of the rate itself.

Figure 2. The instantaneous rate of interannual variability of (b) the global mean
steric sea level, i.e. the first-order time derivative of third IMFs shown in Figure 1.

“The regression of the global sea level and the global steric sea level on their corresponding third IMFs (Figure 3) shows very similar ENSO-like patterns. Notice that the sea level can adjust to changes in the ocean mass within a matter of days through barotropic waves travelling at speeds of order 200 m/s [Lorbacher et al. 2012], the spatial pattern of the ocean mass change on the interannual time scale is nearly homogeneous in the world ocean. This indicates that the spatial pattern of the internanual variability of the GMSL should be attributed to the steric sea level change, while the amplitude is dominated by the change of the ocean mass.”

H/t To The HockeySchtick