I’m very glad to see this point being made in the mainstream media. Earth is a water planet (yet the models don’t do clouds, rain, snow or humidity well).  This is pitched for The Washington Times audience, not a science blog, but it’s a point well made, and it’s good to see the point about positive feedback from water vapor, which I (and David Evans) have been making for so long, is getting out to the mainstream press. Readers will also find the North Atlantic hurricane statistics on predictions versus outcome rather stark.   – Jo

Climate change is dominated by the water cycle, not carbon dioxide

Originally published in The Washington Times 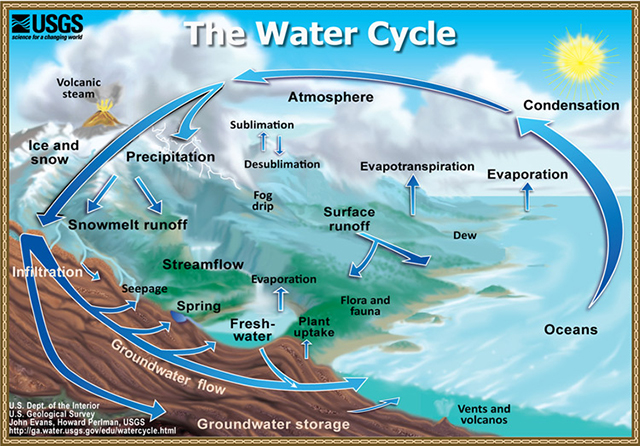 Climate scientists are obsessed with carbon dioxide. The newly released Fifth Assessment Report of the Intergovernmental Panel on Climate Change (IPCC) claims that “radiative forcing” from human-emitted CO2 is the leading driver of climate change. Carbon dioxide is blamed for everything from causing more droughts, floods, and hurricanes, to endangering polar bears and acidifying the oceans. But Earth’s climate is dominated by water, not carbon dioxide.

Earth’s water cycle encompasses the salt water of the oceans, the fresh water of rivers and lakes, and frozen icecaps and glaciers. It includes water flows within and between the oceans, atmosphere, and land, in the form of evaporation, precipitation, storms and weather. The water cycle contains enormous energy flows that shape Earth’s climate, temperature trends, and surface features. Water effects are orders of magnitude larger than the feared effects of carbon dioxide

The Pacific Ocean is Earth’s largest surface feature, covering one-third of the globe and large enough to contain all of Earth’s land masses with area remaining. Oceans have 250 times the mass of the atmosphere and can hold over 1,000 times the heat energy. Oceans have a powerful, yet little understood effect on Earth’s climate.

Yet, the IPCC and today’s climate modelers propose that the “flea” wags “the dog.” The flea, of course, is carbon dioxide, and the dog, is the water cycle. The theory of man-made warming assumes a positive feedback from water vapor, forced by human emissions of greenhouse gases.

The argument is that, since warmer air can hold more moisture, atmospheric water vapor will increase as Earth warms. Since water vapor is a greenhouse gas, additional water vapor is presumed to add additional warming to that caused by CO2. In effect, the theory assumes that the carbon cycle is controlling the more powerful water cycle.

An example is Atlantic hurricane prediction. In May, the National Oceanic and Atmospheric Administration (NOAA) issued its 2013 hurricane forecast, calling for an “active or extremely active” hurricane season. At that time, NOAA predicted 7 to 11 Atlantic hurricanes (storms with sustained wind speeds of 74 mph or higher). In August NOAA revised their forecast down to 6 to 9 hurricanes. We entered October with a count of only two hurricane-strength storms. Computer models are unable to accurately forecast one season of Earth’s water cycle in just one region.

The IPCC and proponents of the theory of man-made warming are stumped by the 15-year halt in global surface temperature rise. Dr. Kevin Trenberth hypothesizes that the heat energy from greenhouse gas forcing has gone into the deep oceans. If so, score one for the power of the oceans on climate change. Others have noted the prevalence of La Niña conditions in the Pacific Ocean since 1998. During 1975-1998, when global temperatures were rising, the Pacific experienced more frequent warm El Niño events than the cooler La Niñas. But the Pacific Decadal Oscillation (PDO), a powerful temperature cycle in the North Pacific Ocean, moved into a cool phase about ten years ago. With the PDO in a cool phase, we now see more La Niña conditions. Maybe more La Niñas are the reason for the recent flat global temperatures. But if so, isn’t this evidence that ocean and water cycle effects are stronger than the effects of CO2?

Geologic evidence from past ice ages shows that atmospheric carbon dioxide increases follow, rather than precede, global temperature increases. As the oceans warm, they release CO2 into the atmosphere. Climate change is dominated by changes in the water cycle, driven by solar and gravitational forces, and carbon dioxide appears to play only a minor role.

Steve Goreham is Executive Director of the Climate Science Coalition of America and author of the new book The Mad, Mad, Mad World of Climatism:  Mankind and Climate Change Mania.