If you are fed up with dismal papers passing peer review and exploiting the good name of science, join us in protest. Christopher Monckton was not content to let John Cook and others get away with a paper where 0.3% becomes 97%, so  Monckton is formally asking the journal to retract it — suggesting it would be wise to protect the journal from any allegation of scientific misrepresentation. Here is his entertaining background on events, and below that, a very serious letter 273 scientists and citizens have already signed to jointly send to the Editor Daniel Kammen. If deceptive wording and hidden data make you angry, join us by commenting below or emailing. — Jo

Honey, I shrunk the consensus

By Christopher Monckton of Brenchley

Doran and Zimmerman (2009) and Anderegg et al. (2010) each concluded that 97% of a few dozen carefully-filtered climate scientists held Man guilty of some of the 0.7 Cº global warming since 1950.

Here’s how they did it.

They examined 11,944 abstracts. But they arbitrarily threw out almost 8000 of them on the ground that they had not toed the Party Line by expressing the politically-correct opinion (or any opinion) on climate change.

Next, they ingeniously interchanged three separate versions of the imagined “scientific consensus”: that Man had caused some warming; that Man had caused most of the warming since 1950; and that man-made warming would be catastrophic unless the West were shut down and climate sceptics were put on trial – as the appalling James Hansen has suggested – for high crimes against humanity.

It was this last definition – in fact untested in Cook et al. or, as far as I know, in any other paper – that Mr Obama’s Twitteratus plumped for when he tweeted that 97% of scientists consider climate change not only real but “dangerous”.

The introduction to the Cook paper said that the survey was intended to examine the standard or IPCC “scientific consensus” that most of the warmer weather since 1950 was our fault.

The authors, having consigned 7930 abstracts to the Memory Hole because they had not parroted the Party Line, were left with 4014 abstracts. They marked just 64 of them, or 1.6% of the 4014 abstracts, as endorsing the standard version of “scientific consensus”. 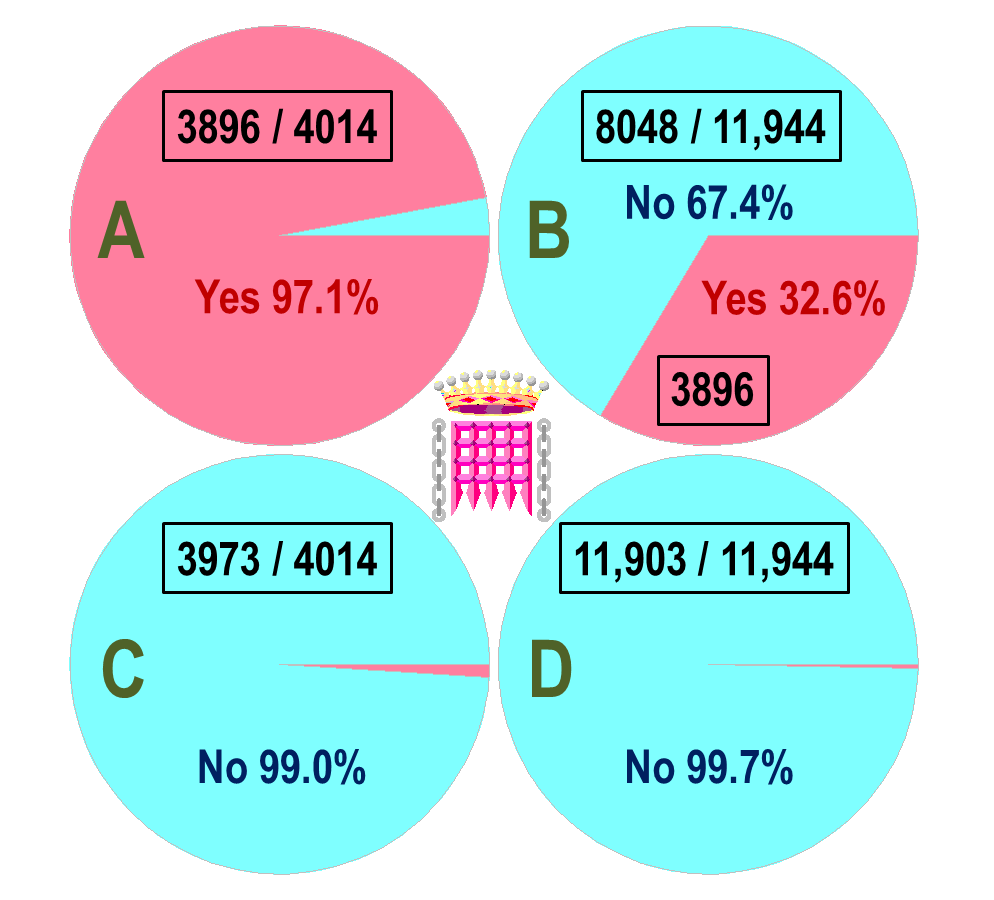 The totalitarian news media (that is just about all of them), ever careless with their logical quantifiers, dutifully reported that 97.1% of all scientists had stated their support for the “scientific consensus” that all global warming since 1950 was manmade.

The website of the Institute of Physics reported one of Cook’s co-authors as saying that the paper had indeed concluded that there was 97.1% support for that notion.

However, in my submission it is time for sceptics not merely to express dismay at the flagrant distortion of the objective truth that has occurred. I reported that co-author to his university for misconduct in the dissemination of research results, and the university has told me it has decided to investigate.

The Institute of Physics, to whom I also complained, says it does not propose to alter its story because, it says, the co-author’s statement accurately reflects the paper’s conclusion. I have sent it the authors’ own data-file and have asked it to check that the authors themselves had marked only 64 out of 11,944 papers as endorsing the version of “scientific consensus” for which the paper claims 97.1% consensus.

I have asked that the Institute should at least report that the result of the paper has been credibly challenged in the peer-reviewed literature; and I await its reply.

A report of research misconduct has gone to the Vice-Chancellor of Queensland University and to the Professor who is the “designated person” to investigate the lead author under the University’s research policies. I await a reply from either of them.

This is where you come in, gentle readers. For I have written a letter to the editor of Environmental Research Letters asking him to withdraw the paper on the ground that it is not merely defective but deceptive. The letter is below.

I should be very grateful if every reader who agrees with me that the paper should be withdrawn would send a message to this thread giving their names and, if they wish, their academic qualifications. I shall then add the names to the letter and send it to the editor. Jo Nova herself is a signatory. Please join us.

The paper should have been withdrawn long ago, but it is perhaps not unreasonable to suspect that the board of the journal, whose members include Peter Gleick, will delay doing the inevitable for as long as possible in the hope of not undermining the IPCC’s arbitrary decision, in its imminent Fifth Assessment Report to assign a 95% confidence interval to the proposition that we caused most of the warming since 1950.

On the evidence that Cook et al. have themselves collected, there is no legitimate scientific basis whatsoever for any such confidence interval. Like much else in the IPCC’s disgraceful documents, it is simply made up.

There was a sting in the tail of my latest reminder note to the editor of Environment Research Letters. I said that I hoped I should not have to involve the public authorities.

For the most disturbing aspect of this affair is that the result that the paper claims is egregiously at variance with the authors’ own categorization of the 11,944 abstracts in their own data-file.

Yet the authors themselves, though they have read Legates et al., have not withdrawn their paper; aside from the editor of Environment Research Letters, not a single member of the board has written back to me; the Institute of Physics seems unbecomingly reluctant to correct its gravely misleading story even though I have sent it Cook’s data-file and a copy of Legates et al. and have asked it to verify the position for itself; and, after a longer period than is reasonable in the circumstances, not one but two senior officers of Cook’s university have failed even to acknowledge a reasonable request that they should investigate.

Something does not smell right. Should we be angry?

Request for withdrawal of a gravely misleading paper

Please withdraw the gravely misleading paper, Quantifying the consensus on anthropogenic global warming in the scientific literature (May 15, Environment Research Letters). The paper claimed a 97.1% “scientific consensus” among the abstracts of 11,944 climate change papers published from 1991-2012. The true “consensus” was not 97.1%. It was 0.3%.

“We examined a large sample of the scientific literature on global CC [the abstracts of 11,944 papers on climate change], published over a 21 year period [1991-2012], in order to determine the level of scientific consensus that human activity is very likely causing most of the current GW (anthropogenic global warming, or AGW)”. [my emphases]

The paper’s definition of “scientific consensus” is thus the standard, quantified definition adopted by the IPCC, which, in its Assessment Reports of 2001 and 2007, considered it very likely that most of the 0.7 Cº global warming since 1950 was manmade.

Computerized and manual examination by Legates et al. (2013) of the authors’ data-file, made available only some weeks after the paper had appeared, showed that on that file the authors had marked as few as 64 abstracts out of 11,944 (0.5% of the entire sample) as explicitly endorsing that “scientific consensus” as defined in the introduction to their paper.

Legates et al., on further examining the 64 abstracts, found that only 41 of them, or 0.3% of the entire sample, had in fact explicitly endorsed that “scientific consensus”. However, the defective paper you published concluded with these words:

“Among papers expressing a position on AGW, an overwhelming percentage (97.2% based on self-ratings, 97.1% based on abstract ratings) endorses the scientific consensus on AGW.”

“scientific consensus that human activity is very likely causing most of the current GW (anthropogenic global warming, or AGW)”. [my emphases]

They had listed this standard, quantified definition of “scientific consensus” in their paper as

“(1) Explicit endorsement with quantification (explicitly states that humans are the primary cause of recent global warming)”, [my emphases]

the first of seven “levels of endorsement” to which they assigned the abstracts. Yet they did not disclose in their paper how few abstracts – just 64 – they had marked as having stated support for that standard, quantified “scientific consensus”.

To conceal how very small this number was, they added together all of the abstracts they had assigned to the first three of their seven categories, treating all three categories as one, and did not state the three values separately. An impartial peer reviewer would have spotted this.

The seven categories or “levels of endorsement” listed in the paper, with the abstracts marked on the data file or disclosed in the paper as falling within each category, were –

One of the authors has sought to justify the discrepancy between the 0.5% of abstracts they marked as “1” (“explicit endorsement with quantification”) and the “97.1% based on abstract ratings” that their conclusion had misrepresented as endorsing the “consensus” as defined:

“The IPCC position (humans causing most global warming) was represented in our categories 1 and 7, which include papers that explicitly endorse or reject/minimize human-caused global warming, and also quantify the human contribution. Among the relatively few abstracts (75 in total) [actually 73] falling in these two categories, 65 (87%) [actually 64] endorsed the consensus view.” [my emphases]

The authors, then, are now claiming 87% (not 97.1%) “scientific consensus” – but are doing so on the basis of a sample size that has shrunk from 11,944 to just 73 papers, improperly eliminating 99.4% of the papers in the original sample. No scientific survey or opinion poll with a sample size less than 1000 would normally be recognized as having any meaning.

Even then, none of the abstracts the authors had marked as falling within categories 5-7 could possibly be said to have endorsed the “scientific consensus” as defined.

There were 41 abstracts explicitly endorsing the IPCC’s version of consensus. But, rejecting any anthropogenic influence, there were not only 9 in level 7 but also 54 in level 5 and 15 in level 6. Thus, 78 papers rejected any definition of “scientific consensus”.

Total sample size was thus only 119 out of 11,944 papers, or just 1% of an already smallish literature sample. Nowhere does the paper admit that the sample size on the basis of which the claim of 97.1% (now 87%) endorsement of “scientific consensus” is made was so small.

In an article entitled Study reveals scientific consensus on anthropogenic climate change, posted at http://www.iop.org/news/13/may/page_60200.html, the Institute of Physics cites one of the paper’s authors:

“Co-author of the study [name and institution] said: ‘We want our scientists to answer questions for us, and there are lots of exciting questions in climate science. One of them is: are we causing global warming? We found over 4000 studies written by 10 000 scientists that stated a position on this, and 97 per cent said that recent warming is mostly man made.’” [my emphases]

I can discern no rational basis for that author’s claim that 97% of the 4014 abstracts that had stated a position on the “scientific consensus” had “said that recent warming is mostly man made”. The author’s claim, like the claim made in the conclusion of the paper itself, is false.

The authors had not adhered throughout to the definition of “scientific consensus” that their introduction had stated was the basis of their inquiry. They were implying, in effect, that since 97.1% of the 4014 abstracts had stated or implied that Man could cause some warming (categories 2-3), those same 97.1% were also stating or implying that Man caused most of the global warming since 1950 (category 1).

I am disappointed – and so should you be –

The paper you published is not merely defective: it is deceptive. It claims that 97.1% endorsed a “scientific consensus” that at most 1% had endorsed. You cannot let it stand.

I submitted a corrective commentary to you. Upon request, I subsequently shortened and resubmitted the commentary, but I received no further reply.

In the circumstances, to protect your journal’s reputation and those of its Board members from any allegation of scientific misrepresentation, you must withdraw the paper forthwith. Please make an early announcement to that effect, and let me know when you have done so.

Copies go to all members of your board. I await your reply.

[signed] Monckton of Brenchley [and 273 others]