In answer to the excuse du jour: “The Ocean ate my Global Warming”.

Now that the plateau in air temperatures has lasted for 15 years, everyone, even IPCC lead authors, can see the “90% certain” models were 98% wrong. So the IPCC now claims the heat went into the deep abyss, which they didn’t predict, can’t measure accurately, and, even by the best estimates we have, has not been anywhere near large enough to explain the missing energy.

They predicted the surface air temperature would increase, but it didn’t. (The 1990 IPCC predictions about temperatures were so wrong the trends have come in below their lowest possible estimate.) They predicted the oceans would warm more than twice as much as they actually have (as best as we can tell). They did not predict the air temperature would level out for 15 years, and the oceans would suddenly start producing “natural cooling”.

The oceans are a bit of a mystery black box

There are 1.4 billion cubic kilometers of ocean out there — it’s so big it hid a 650 km volcano until two weeks ago. Only two people have been to the bottom ever (correction, three men), and they stayed just 20 minutes (and all they saw was silt). Despite this the IPCC wants us to believe we can measure the entire Earth’s ocean temperature in one hundreth’s of a degree, not just now, but allegedly also 50 or 60 years ago. There is no 95% certainty about ocean measurements in 1962 or even in 2002. Strangely, the best models in the world did not predict this in 2007.  The IPCC are handwaving at the ocean heat so they can still say “the world is warming” but in reality the numbers are devastating, and the data (as scratchy as it is) supports the skeptics. If the standstill in temperatures is bad news for the IPCC, so are the ocean heat figures.

The excuse that the missing heat went into the ocean is a deceptive reframing — where a failure in ocean measurements is used to save them from their  failure to predict what happened above the water. It is as simplistic as saying the warming line points up, and “up” is success.

Who switched on natural variability in 1998?

1.If the oceans affected global temperatures after 1998, what were they doing before that?

If the oceans caused natural cooling over the last 15 years, how do we know they didn’t cause natural warming over the 20 years before that?  The answer is, if La Nina’s can cool the surface, El Nino’s can warm it. If oceans can draw heat out of the sky, then in times when they are not doing that, they can also increase the trends.

Caught again, the IPCC hides this banal symmetry. Their self-serving lop-sided rule is: if it cools, it’s natural; if it warms, it’s artificial. The killer contradiction goes unspoken. If the warming from 1979 -1999 was significantly caused by natural changes in currents, clouds or wind which allowed heat to build up in the air, it means they underestimated the natural effect of the oceans and overestimated the effect of CO2 during the warming.  When CO2 levels reached their “highest” levels in human history after 1998, the oceans overrode whatever effect CO2 had. The IPCC knows so little about the ocean, that they didn’t even allow for this possibility in their past predictions.  Why should we let them get away with the banal post hoc hand-waving excuse?

This is a point so simple any science journalist ought to spot it immediately. Have any of them asked?

2. The oceans are supposedly 0.06 C warmer than 50 years ago (but we can’t really measure the global ocean temperature to a hundreth of a degree).

The first point of deception is that temperature is measured in degrees, but the Climate-change Industry always report ocean temperatures in Joules. This hides the obvious problem — we just can’t measure the global ocean temperature that accurately.

Before 2003 there is only sparse irregular measurements with everything from buckets off boats to thermometers fired into the water and usually without pressure sensors (we estimated how deep they were from how long they’d been falling…not much room for precision there). Much of the ocean wasn’t covered, and there were almost no readings below 700m (the average depth of oceans is 4km).

We’ve only had decent measurements of the ocean since mid-2003 when the ARGO system started. But even these measurements are considerably less certain than often claimed, and they didn’t find the missing energy anyway (see point 4).

3. The utterly banal again: All forms of warming cause ocean heat to rise.

Ocean warming (like most other indicators) doesn’t prove anything about the cause. If the warming since 1700 was due to solar magnetic effects, or lunar effects, cosmic rays and changes in cloud cover, the oceans would warm. The only point that matters is whether the models have verifiable predictive skill of any kind. They don’t: Ergo the theory is wrong.

4. The missing energy is just not enough. The numbers Jim, look at the numbers!

ARGO data started in 2003, but the observed ocean warming does not fit the model predictions. (See this post for details.) The rate of increase is too small to demonstrate a large radiative imbalance.

But this also applies to the pre-ARGO data (as bad as it is).  When we get down to hard numbers even professional experts in the Climate Change Industry find the “radiative imbalance” is only one third to one half of what the models and the theory of man-made global warming predict. They don’t necessarily say that in so many words, but the numbers do. 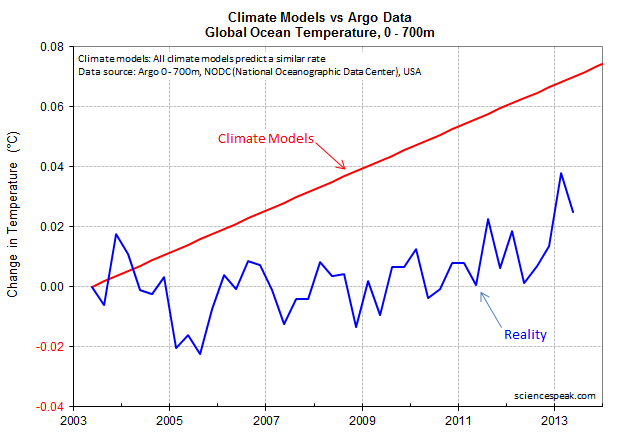 Since sufficient ARGO data started in 2003, observed ocean warming does not fit the model predictions. See this post for details.  | Updated, Sept 2013.

The climate models estimate a CO2 additional forcing of 3.7 W/m2  with a doubling of CO2. (And since CO2 hasn’t doubled, then  we’re looking for whatever part of 3.7W/m2 applies for the proportional increase in CO2 during the period in question. Hence that’s about 1W/m2 in the last 50 years, and less because 30% of the Earth is covered with land, not ocean).

David Stockwell has looked into the recent Levitis 2012 paper, which analyzed ocean heat from 1955-2010 and concluded that it supports the skeptics. Essentially, the models predicted 0.69W/m2, but Levitis found 0.3W/m2. Less than half. Once again, the data shows the models exaggerate by a factor of at least two.

To compare these figures, say the continuous top-of-atmosphere forcing is 1Wm-2, a figure given by Meehl and Hansen and consistent with the IPCC estimates. The forcing of the ocean from a TOA forcing of 1Wm-2 is a lower 0.6m-2 due to losses, estimated by Hansen.The best, recent measurements of the forcing 0f 0.3Wm-2 are half these IPCC estimates. The anthropogenic component of the forcing is even less, as a large part of the 0.3Wm-2 in the last 60 years is due to increased solar insolation during the Grand Solar Maximum.

This mild forcing is right in the ballpark that skeptic scientists such as Lindzen, Spencer, Loehle and Idso (and myself) have been consistently saying is all that is justified by the evidence. It appears that Levitus et al. confirms the skeptics, and the IPCC has been falsified.

This hunt for ocean heat has been going on a long time. [See David Whitehouse GWPF for some history and also Lubos and Lucia for some recent discussion.]

So the ocean heat content figures agree well with skeptics who estimate feedbacks are net negative and additional warming due to CO2 doubling will amount to about half a degree, not 3 degrees.

We need to expose the myth that any warming at all means CO2 is pollution and we need to spend $42Trillion to stop it. The argument lives or dies on the numbers.

Independent work like his, cross checking models with observations could potentially save millions of dollars for the citizens of the free world, yet none of this kind of auditing is actively supported by governments. Tisdale goes through all the oceans, looks for polar amplification, regional predictions, global predictions, precipitation and more.

“Climate Models Fail exposes the disturbing fact that climate models being used by the IPCC for their 5th Assessment Report have very little practical value because they cannot simulate critical variables of interest to the public and policymakers. Using easy-to-read graphs, this book compares data (surface temperature, precipitation, and sea ice area) with the computer model simulations. It is very easy to see that the model outputs bear little relationship to the data. In other words, climate models create imaginary climates in virtual worlds that exhibit no similarities to the climate of the world in which we live.

Climate Models Fail clearly shows that climate models have little value for the public and policymakers because their number-crunched virtual worlds do not come close to simulating the real world we inhabit.

A few questions serious journalists might want to ask instead of just cut and pasting press releases from activists.

1 Did the oceans contribute to warming?

2 How accurate are those measurements?

3 How does this tell us the cause of the warming?