Four Apollo Astronauts are outspoken skeptics. This includes Buzz Aldrin and Harrison Schmidt (2 of the 12 men who walked on the moon) and Phil Chapman (Apollo 14) and Walter Cunningham (Apollo 7).

Walter Cunningham is a fighter pilot and a physicist and was the Lunar Module pilot on the Apollo 7 mission. In a 263 hour mission in October 1968 the three astronauts covered four and a half million miles.

Over forty years later, he describes how the public trust built by the astronauts and technical specialists who put man on the moon has been abused by opportunists. NASA and science has changed.
UPDATE: Ask yourself how hard it would be for the BBC, ABC or New Scientist to have done this interview (and years ago). Cunningham confirms that none of them have ever approached him to ask why he is openly skeptical, which tells you all you need to know about the impartiality of mainstream “journalists”.
…
* * *
Below are selected snippets of Larry Bell’s interview with Walter Cunningham:

“Those of us fortunate enough to have traveled in space bet our lives on the competence, dedication, and integrity of the science and technology professionals who made our missions possible…In the last twenty years, I have watched the high standards of science being violated by a few influential climate scientists, including some at NASA, while special interest opportunists have abused our public trust.”

“Many of NASA’s retirees have grown increasingly concerned that GISS, a NASA organization located in a midtown Manhattan office building, was allowing its science to be politicized, compromising their credibility. Our concern, beyond damage to the NASA’s exemplary reputation, was damage to their current or former scientists and employees, and even compromising the reputation of science itself.

“We developed a letter to NASA Administrator Charlie Bolden and obtained signatures from seven Apollo astronauts, several former Headquarters managers and Center directors, and 40 former management-level technical specialists. We asked that he restrain NASA from including unproven claims in public releases and on websites. Statements by NASA that man-made carbon dioxide was having a catastrophic impact on global climate change are not substantiated, especially when considering thousands of years of empirical data. It is clear that the science is NOT settled.

“James Hansen … was an embarrassment and disgrace to the agency [NASA].

“Understanding global climate and what, if anything, humans can do to affect it are scientific questions that can be answered only by honest science and scientific data. Yet, global warming alarmists invariably try to make their case through rhetoric, dogma, opinion, and emotion.

“Anytime the “evidence” is debatable, we should push for open and honest public debate in an effort to get to the “truth.” Unfortunately, believers in human caused global warming avoid debate like the plague.

“NASA should be at the forefront in the collection of scientific evidence and debunking the current hysteria over human-caused [anthropogenic] global warming [AGW]. Unfortunately, it is becoming just another agency caught up in the politics of global warming, or worse, politicized science.  Advocacy and support for the White House agenda is replacing objective evaluation of data, while scientific data are being ignored in favor of emotions and politics.

“Much of this may be due to today’s lowered educational standards in scientific literacy, skepticism and critical thinking. Many people today are unable to distinguish between science and non-science, leaving them vulnerable to the emotional appeal of human caused global warming. Unfortunately, most students today are fed a lot more hype about self-esteem and global warming than real information about history and science. Let’s finally recognize that “self-esteem” is no substitute for common sense, and “indoctrination” is no substitute for education.
Read the full interview at CFACT
Walter Cunningham released the book All-American Boys in 2003:
“Cunningham tells how NASA lost its way and who is responsible. He shares his views on how NASA management has measured up to the reputation they inherited from the Sixties and Seventies – the days of Apollo.” 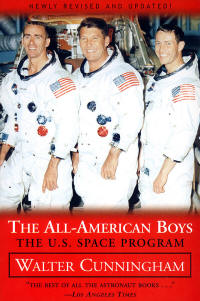 The All American Boys by Walter Cunningham

Popular Technology has a page on astronauts who are skeptics.
Bruce of Newcastle points out: …the letter from 49 former NASA scientists and astronauts which they sent to the NASA administrator last year objecting to the official position on global warming.
9 out of 10 based on 118 ratings