There they go again. Last night the ABC again used taxpayer dollars to post up a slick advertisement for their favourite religion. Because Catalyst won’t read skeptical blogs, interview skeptics, or ask difficult questions, they give a false impression to any poor viewers who haven’t figured out that the presenters (in this case, Anja Taylor) are more activist than investigator.

“The gorilla in the kitchen remained invisible. Where was cause and effect?”

The Earth has had extremes of every kind of weather for 4.5 billion years. What makes the current ones any different? Any cause of warming could melt ice, raise sea-levels, shift jet streams, change cloud cover and shift evaporation rates. How do we know this warming is due to coal fired power stations? We only “know” because some climate modelers say so — but they rely on models that assume relative humidity stays constant when it doesn’t, and which are proven “unskilled” at precipitation, cloud cover and upper tropospheric temperature profiles.  The models ignore lunar effects, solar magnetic effects and millions of observations so they can blame your SUV and air-conditioner for causing droughts, storms, blizzards, and floods.

This is the modus operandi of the ancient witchdoctor. “I can stop the storms — send us your tithe”. Any time Catalyst want to get a list of real questions to ask climate modelers, they only have to email.

There are hundreds of ways to define a record or trend, so there is plenty of potential for cherry picking and Catalyst take every opportunity. The records and trends that fit the approved meme get promoted. Any inconvenient data is kept carefully out of view. Warming saves more lives than it costs. Cold winters kill more people than hot summers. There is no trend in global cyclone energy, no trends in Australia or NZ. There have always been heatwaves and storms. The Angry summer wasn’t that hot according to the satellites. I could go on…

It’s not so much what Catalyst say, as what they won’t mention. So the water cycle is intensifying — double the climate models? But Catalyst won’t tell you that the temperature trend is half what the models predicted (and below their lowest estimate). They won’t tell you that the water vapor trends in the upper troposphere are crucial to the models but completely wrong. They mention the ARGO buoys and then ignore their most important result — that any warming so far is well below what the models estimate (inasmuch as we can tell). They mention the Arctic, but not the Antarctic. (Wasn’t this supposed to be global warming?)

Without a cause-and-effect link this isn’t science, it isn’t journalism, and we don’t need more state-funded propaganda.

Catalyst for regulation of energy use and bigger government perhaps?

Thus on the seventh day…

…with fire and brimstone

Sinners will get old and sick too.

The new Gods are totally biblical. 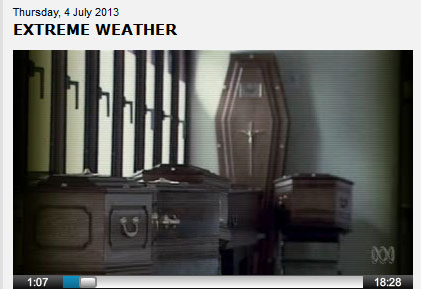 It’s coming to get you

Ken Stewart wrote to me this morning:

If you want a “perfect” example of lack of balance in the ABC climate reporting, this is it.  Literally.

Last night’s Catalyst (transcript here)  was all about extreme weather, complete with scary images and scarier narration.  For now I will leave the claims about more frequent high intensity rain events (I think they might find Toowoomba got a bit more than 100mm in an hour, and they mixed up footage of Toowoomba with the Lockyer Valley), January being our hottest month, the Pacific getting fresher and the Atlantic saltier.  I’ll just look at the claim that blizzards and heatwaves can both result from global warming.

Professor Jennifer Francis , from the Institute of Marine and Coastal Sciences, Rutgers University, explained that the rapidly warming Arctic has created a ‘gentler’ atmospheric temperature gradient between the Tropics and the Poles.  This leads to weaker, more variable, jet stream winds, which then ‘meander’ north and south more.   This allows frigid polar air to penetrate further towards the tropics, and hot tropical air to penetrate further towards the poles.  Also, because the wavy jet stream is moving more slowly, this causes weather systems to persist for longer.

OK, that is a plausible explanation for the extremes being experienced in Europe.  But did your intrepid investigative science reporter Anja Taylor or researcher Wendy Zukerman then ask the good professor, “So is that happening in the Southern Hemisphere too? You know, with the Angry Summer?”

Who knows if they did.  But the answer is “no”. For while it is true that “The Arctic is warming faster than anywhere on Earth”, the Antarctic isn’t. 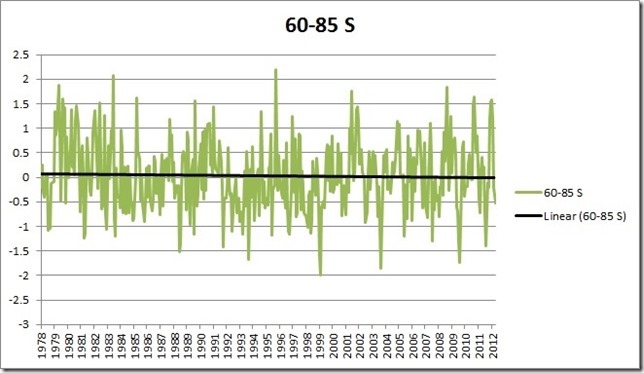 Here is a graph of tropospheric temperature data from UAH for the region 60 to 85 degrees South.

[Jo adds that West Antarctica has warmed, but Law Dome in Antarctica has been cooling for 500 years. The Australian Antarctic stations at Mawson, Casey, and Davis show no significant trend — only Macquarie Island has warmed. The oceans are warming (supposedly) but strangely Antarctic sea ice has increased. There is a million more square kilometers of Antarctic sea-ice today than the same time of year in 1980.]

For the past 34 years, as long as satellites have been able to measure, Antarctic temperatures have been the same.

Therefore, the gradient between the Tropics (which have warmed) and the South Polar region should be steeper if anything, not gentler, and therefore the southern jet stream should not be becoming weaker, slower, and more variable (as in the Northern Hemisphere).  If anything, it should be strengthening.

The logical conclusion is that the Angry Summer (which didn’t occur according to satellites), and the current cold weather in southern parts, cannot be blamed on the same mechanism.

The Catalyst team failed to report that Professor Francis’ explanation does not hold in the Southern Hemisphere, and that the South does not balance the North- but hey!- how were they to know?

Catalyst– the science show you’re having when you’re not having science.