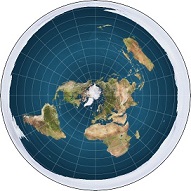 Flat circle, wall of ice around the edge. Hmm

Let it be known, the next time you are called a “Flat Earther” you can point out that the Flat Earth society (or at least their President) is on the same side as Al Gore and James Hansen. It’s a piece of useless trivia that’s good for useless conversations.

I did not believe there was such a group so I scoped out their site expecting it to be a joke. But if it is a satire, it’s a very detailed one, they have maps and t-shirts, and explanations, and so far I haven’t found the joke. Salon.com decided it was real:

Actually, even the Flat Earth Society believes in climate change

Yes, such a group exists. It thinks the world is flat — but also getting warmer

In his big speech on climate change today, President Obama mocked Republicans who deny the existence of man-made global warming by derisively referring to them as members of “the Flat Earth Society.”

As it turns out, there is a real Flat Earth Society and its president thinks that anthropogenic climate change is real. In an email to Salon, president Daniel Shenton said that while he “can’t speak for the Society as a whole regarding climate change,” he personally thinks the evidence suggests fossil fuel usage is contributing to global warming.

What can I say? With 7 billion people, odds are that some people might believe the world is flat. It’s apparently centred on the North pole and radiating out to end in a wall of ice all around. (That stops the oceans from draining off. Handy.) They call themselves empiricists (the world looks flat) and at least don’t claim to know what’s beyond the wall. To the obvious retort about astronauts and camera’s, they point out that photos of Earth can be faked. They have explanations for the day-night thing, and the summer-winter thing, but I can’t say I feel any urge to give up my solar-centred globe model. (The sun would have to be pretty small, or hey, flat itself, to get the dark effect on one half… no let’s not even go there.) With each explanation of the flat world, another law of physics explodes.  I felt like an anthropologist visiting a lost tribe. I don’t want to be mean… they seem like nice people.

Nicer indeed than the name-calling cheats who call us “Flat Earthers”.