Tim Yeo, conservative MP who heads the UK climate change committee has broken the litany. This is a man who’s wanted to decarbonize the Brits for years, and he has just admitted “natural phases” might be to blame. He is only saying the bleeding obvious, but what happened to the official “no debate” doctrine? What exactly are deniers denying now, and where did that overwhelming evidence go?

“The dying gasps of the deniers will be put to bed. In five years time, no one will argue about a man-made contribution to climate change.” 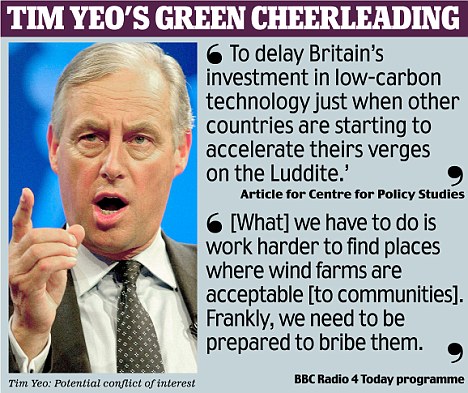 Before he changed his mind. | Daily Mail, Gerry Peev.

[Telegraph, Matthew Holehouse]: “He (Yeo) insisted such action is “prudent” given the threat climate change poses to living standards worldwide. But, he said, human action is merely a “possible cause”.

Asked on Tuesday night whether it was better to take action to mitigate the effects of climate change than to prevent it in the first place, he said: “The first thing to say is it does not represent any threat to the survival of the planet. None at all. The planet has survived much bigger changes than any climate change that is happening now.

He went on: “Although I think the evidence that the climate is changing is now overwhelming, the causes are not absolutely clear. There could be natural causes, natural phases that are taking place.”

This is not just any old politician shifting gears. Yeo was named “Politician of the Year” at the inaugural 2011 Green Business Awards.  James Delingpole pointed out that “Trougher” Yeo had other reasons for being so keen about environmental issues — thousands of other reasons. (Most of them, pounds sterling.) Not to mention that Yeo is  Chairman of TMO Renewables, a biofuel company. Indeed, according to the Daily Mail in August 2012 other MPs wre pretty cheesed with the deal:

“Mr Yeo lists just over £139,450 in paymentslinked to green companies in the latest MPs’ register of interests.

Furious MPs are now trying to depose him as chairman of the select committee.

One insider told the Mail: ‘We are seeking advice on how this can be done as select committee chairmen are now elected. But there is obviously a potential conflict of interest here.’

Bishop Hill says: Now I’ve heard everything. “…Yeo is once again demonstrating his unerring ability to bend with the wind”

Yeo later qualified things in the way that only politicians can do:

Asked about the comments this afternoon, Mr Yeo said: “It is possible there are natural causes as well, but my view has always been that – for twenty years – I have thought the scientific evidence has been very convincing. The strong probability is that it is man-made causes contributing to greenhouse gas concentrations.”

UPDATE:  Dellers is onto it. Beautifully.

Still, it’s good to see Yeo taking at least the first tentative step on the path to redemption. Admitting you were totally wrong about something, that you’ve been made to look an utterly despicable, greedy fool, that even the Conservatives in your constituency hate you, that no one trusts you as far as they can spit, that you’ve done immeasurable damage to your country’s landscape and economy with the abysmally counterproductive environmental policies you not only helped promote but from which you may have benefited financially: these are things no man would ever wish to admit to himself.

UPDATE: From the comments people don’t seem to appreciate the full hypocrisy of Yeo’s work (read all of  Dellers…. here’s a bit more)

But it’s OK Tim. I can help. In the last two years, for example, you have earned getting on for £250,000 on top of your MP’s salary, from your various green interests. Imagine how much happier you’d be in your skin if you could divest yourself of that money which you have now realised is tainted money. Imagine if you’d been given a blood diamond by Charles Taylor; imagine if you’d produced a DVD called “Now Then, Now Then: the Very Best of Jimmy Savile”: you couldn’t, in all conscience, keep the profits from that, could you?

Well, Trougher, me old mucker, I’m afraid the same rules apply with your green business interests. Here’s the thing: that industry you’ve profited from simply WOULD NOT EXIST had it not been for that toxic combination of junk science and hysterical fearmongering to which you have made such a vocal contribution.

I know quarter of a million quid is small beer next to the profits being raked in by your mates in the renewables industry. But for some people out there it would make a real difference, especially the victims of the wind industry which the Committee for Climate Change (Prop: Tim Yeo) has done so much to encourage.

£50 buys someone a decent night’s sleep in a B & B away from the insomnia-inducing low frequency noise of a wind farm.

UPDATE:  Today Tim Yeo insists his views on climate change have not changed one bit and he sings the appropriate hymn: (h/t Pat)

“I accept the overwhelming scientific evidence that human activities are having a major impact on the climate – there is an overwhelming probability that the impact of greenhouse gas emissions from human actions are contributing to climate change.

So was he overhyping something he didn’t believe for the last five years, or is he lying now when he says we are not sure about the cause?

It’s a typical black-is-white statement, a backpedal-from-the-backpedal (I bet his green friends were appalled, he’s probably been fending off horrid emails all day).