Australia could be leading the world in research that will save lives and earn money. Instead we lead the world in gullible obedience to an absurd scheme to change the weather.

Making human body parts from off-the-shelf or customized cells is a vast improvement on waiting for healthy people to die and donate, and a lifetime of immunosuppressants. Any delay in developing these techniques will surely cost lives and prolong disability. Those who do develop and patent these techniques are bound to profit and be able to afford even more research, and will improve national productivity as well as the quality of life. For those on waiting lists, spending $3billion on solar panels to stop storms and hold back the sea is the cruelest waste.

This type of medical work could make waiting lists for organ-donation a thing of the past. The political vanity of supporting useless causes for the sake of symbolism has a ghastly price.

Read about what this poor little girl and her family have had to go through. She is two, and had never been home or tasted food until last month. She has not been able to speak, but might possibly one day. This is marvelous news, which we fervently hope continues to deliver. It is very early days…

Toddler is youngest to ever get lab-made windpipe

South Korean 2-year-old has new windpipe made from her own stem cells; youngest patient ever

CHICAGO (AP) — A 2-year-old girl born without a windpipe now has a new one grown from her own stem cells, the youngest patient in the world to benefit from the experimental treatment.

Hannah Warren has been unable to breathe, eat, drink or swallow on her own since she was born in South Korea in 2010. Until the operation at a central Illinois hospital, she had spent her entire life in a hospital in Seoul. Doctors there told her parents there was no hope and they expected her to die.

The stem cells came from Hannah’s bone marrow, extracted with a special needle inserted into her hip bone. They were seeded in a lab onto a plastic scaffold, where it took less than a week for them to multiply and create a new windpipe.

About the size of a 3-inch tube of penne pasta, it was implanted April 9 in a nine-hour procedure.

Read it all: News Daily

Bionic ear made with 3D printer 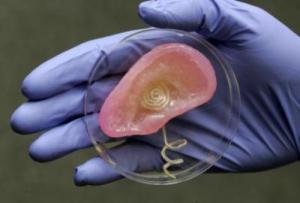 A bionic ear created with 3D printing. It contains an antenna that can pick up radio waves. Credit: Photo by Frank Wojciechowski

May 1, 2013 — Scientists at Princeton University used off-the-shelf printing tools to create a functional ear that can “hear” radio frequencies far beyond the range of normal human capability.

The researchers’ primary purpose was to explore an efficient and versatile means to merge electronics with tissue. The scientists used 3D printing of cells and nanoparticles followed by cell culture to combine a small coil antenna with cartilage, creating what they term a bionic ear.

“In general, there are mechanical and thermal challenges with interfacing electronic materials with biological materials,” said Michael McAlpine, an assistant professor of mechanical and aerospace engineering at Princeton and the lead researcher. “Previously, researchers have suggested some strategies to tailor the electronics so that this merger is less awkward. That typically happens between a 2D sheet of electronics and a surface of the tissue. However, our work suggests a new approach — to build and grow the biology up with the electronics synergistically and in a 3D interwoven format.”

This project, however, is the team’s first effort to create a fully functional organ: one that not only replicates a human ability, but extends it using embedded electronics.

“The design and implementation of bionic organs and devices that enhance human capabilities, known as cybernetics, has been an area of increasing scientific interest,” the researchers wrote in the article which appears in the scholarly journal Nano Letters. “This field has the potential to generate customized replacement parts for the human body, or even create organs containing capabilities beyond what human biology ordinarily provides.”

Standard tissue engineering involves seeding types of cells, such as those that form ear cartilage, onto a scaffold of a polymer material called a hydrogel. However, the researchers said that this technique has problems replicating complicated three dimensional biological structures. Ear reconstruction “remains one of the most difficult problems in the field of plastic and reconstructive surgery,” they wrote.

To solve the problem, the team turned to a manufacturing approach called 3D printing. These printers use computer-assisted design to conceive of objects as arrays of thin slices. The printer then deposits layers of a variety of materials — ranging from plastic to cells — to build up a finished product. Proponents say additive manufacturing promises to revolutionize home industries by allowing small teams or individuals to create work that could previously only be done by factories.

The finished ear consists of a coiled antenna inside a cartilage structure. Two wires lead from the base of the ear and wind around a helical “cochlea” — the part of the ear that senses sound — which can connect to electrodes. Although McAlpine cautions that further work and extensive testing would need to be done before the technology could be used on a patient, he said the ear in principle could be used to restore or enhance human hearing. He said electrical signals produced by the ear could be connected to a patient’s nerve endings, similar to a hearing aid. The current system receives radio waves, but he said the research team plans to incorporate other materials, such as pressure-sensitive electronic sensors, to enable the ear to register acoustic sounds.