Thanks for the invite to assist with the crowd sourced online survey.

1. The survey is profoundly anti-science, it’s exactly the kind of thing I debunk on my blog. Consensus is the stuff of politics, not science. Science is not a democracy, and we don’t vote for the laws of physics, which are either right or wrong and not “97% popular”. Hence, any answer you get in this survey (and it appears you already have the answers) has got nothing to do with understanding the climate of Earth. It may possibly be helpful in psychosocial analysis of groupthink in modern science, or the effect of monopsonistic funding on scientific progress, but that brings me to problem 2, even if it were useful for that, you are not the researcher to study that. See point 2.

2. You still refer to us as “deniers” in much of your work. You admitted there was no such thing as a “climate denier” a few months ago (albeit after five years of using the term), but you have not adopted a more useful name, or apologized for abusing the English language. Clearly you think skeptics are run by their lizard brains, unable to think, prone to burying their heads in the sand. (Didn’t you put that on the cover of your book?) So in the end, if skeptics are deniers, and they are so incapable of thinking, it’s not rational for you to want deniers to “help” with this fallacy of a survey, because irrational dullards would be bound to do a bad job. It appears more likely that that what you are trying to achieve is a new way to survey people who disagree with your scientific opinion. That would make this a form of confirmation bias for the purpose of PR and not science. (See also point 1). 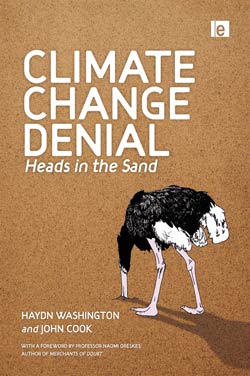 If this is what John Cook thinks of skeptics, why would he ask them to “help” his research?

3. Your recent work with Stephan Lewandowsky has rather vaporized any small remnant of trust or goodwill most skeptics feel for you. Hence, as commenters are already saying on threads related to this, what skeptic would bother giving you 10 minutes of their time? One term I heard was “barge-pole”.

4. Lastly there is the question of honesty. You’ve given each skeptic blogger a different survey link, so presumably you can track responses to certain blogs. Yet in the email you tell me that the responses are anonymous and you don’t disclose that each site was given a trackable link. That’s dishonest. (It reminds me of the time you insisted you hosted a professional research survey on your blog and when you couldn’t find it, said improbably, that you’d deleted it, except it was never on your blog in the first place was it? There is a peer reviewed science paper that justifies itself because of that imaginary post of yours, why don’t you correct it? Are you interested in the truth, or just “The Cause”?)

I think that’s got it covered: It’s anti-science, illogical, run by the wrong man, and you haven’t been honest.

But if you can fix all that, then send me an email.