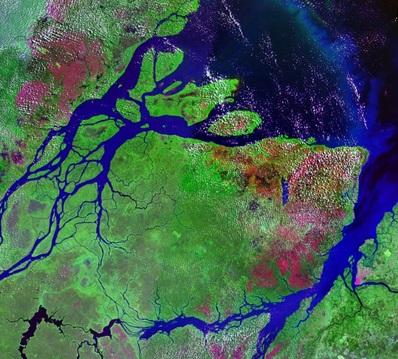 The mouth of the Amazon is the worst source of “pollution”.

Bad news for fans of The Amazon River. A new study shows that while the Amazon rain forest is the Lungs of The Planet, pulling down gigatonnes of CO2, the river undoes all the good the trees do, and pours all the CO2 back into the sky. Damn that river eh? Lucky it only discharges one fifth of the worlds freshwater.

Apparently most researchers thought bacteria couldn’t digest the tough woody lignin of tree debris fast enough to prevent it getting to the ocean*. Underestimating microbial life seems a common affliction, and we hear was a big surprise that only 5% of the lignin actually ends up reaching the ocean where it might sink to the floor and be sequestered. The rest is broken down by bacteria and released into the air. The clues were there for years that the Amazon was giving off lots more CO2 than people expected, but the consensus was that it “didn’t add up”. So much for that consensus.

Yet another victory for observations over opinions.

Until recently, people believed much of the rain forest’s carbon floated down the Amazon River and ended up deep in the ocean. University of Washington research showed a decade ago that rivers exhale huge amounts of carbon dioxide — though left open the question of how that was possible, since bark and stems were thought to be too tough for river bacteria to digest.

A study published this week in Nature Geoscience resolves the conundrum, proving that woody plant matter is almost completely digested by bacteria living in the Amazon River, and that this tough stuff plays a major part in fueling the river’s breath.

The finding has implications for global carbon models, and for the ecology of the Amazon and the world’s other rivers.

“People thought this was one of the components that just got dumped into the ocean,” said first author Nick Ward, a UW doctoral student in oceanography. “We’ve found that terrestrial carbon is respired and basically turned into carbon dioxide as it travels down the river.”

Tough lignin, which helps form the main part of woody tissue, is the second most common component of terrestrial plants. Scientists believed that much of it got buried on the seafloor to stay there for centuries or millennia. The new paper shows river bacteria break it down within two weeks, and that just 5 percent of the Amazon rainforest’s carbon ever reaches the ocean.

“Rivers were once thought of as passive pipes,” said co-author Jeffrey Richey, a UW professor of oceanography. “This shows they’re more like metabolic hotspots.”

How do we stop that river, can we divert it underground, or cover it in white reflective plastic — do you think? Would it be better to dose it with megatonnes of antibiotics, and can we have a grant to study that? Does this mean flushing antibiotics down the toilet helps change the weather?  Don’t send those old pills to landfill…

Remember there are global carbon markets running (limping) churning over $170 odd billion a year pretending that they can account for carbon flows in a meaningful way. Shame there are just a few odd gigatonnes still unaccounted for. Does this mean the parts of the Amazon that WWF “own” which were projected to net them as much as $60 billion may actually have a net worth of zero dollars when the “downstream” effect of their pollution is taken into account? We wouldn’t let the big mining corporations ignore their downstream pollution, so why let that naughty river get away with it?

Can someone calculate how many coal fired powerstations this river is equivalent too?

What Nature giveth, nature taketh away.

* Clarified thanks to Gee Aye #12. Added: “… fast enough to prevent it getting to the ocean”