If the Greens cared about CO2 they’d be very interested in ways to reduce emissions. But their selective interest speaks volumes about their real priorities. Anton Lang shows how newer coal fired powers stations run hotter and at higher pressures, and use 15% less coal to produce the same amount of electricity. We could upgrade our power stations and cut a whopping 15% of their emissions — which is huge compared to the piddling small, often unmeasureable savings thanks to renewables. Even massive floods that stop industry don’t reduce our emissions as much as this would. Do the Greens hate the coal industry more than “carbon pollution”? — Jo

It all comes down to steam.

Assume (for a moment) that we have to reduce the emissions of CO2 by something like 20% between now and 2020.

Previously I showed we could achieve a reduction of 13% in CO2 emissions from the electrical power generating sector just by converting from the current 70’s technology coal fired power to the newest technology USC (UltraSuperCritical) coal fired technology. That 13% I quoted at the time was theoretical, but in China over the last three years the emissions reduction of new USC plants is even better, around 15% to 17%. This is off-the-shelf technology that handles base-load, produces cheap electricity, and reduces emissions. 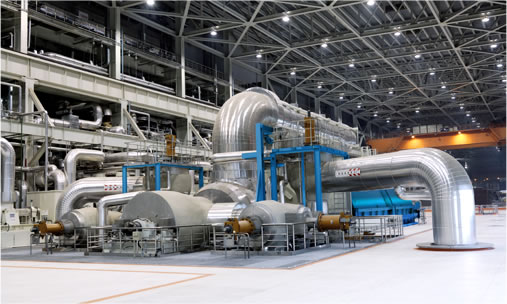 The most efficient rotors in a power station are enormous. The rotor in 660MW generator could weigh anything up to 600 tons or more, and that huge weight has to be driven at 3000RPM (for 50Hz power — in the U.S. it is 3600RPM, for 60Hz power). That’s rotating that huge weight at 50 times a second. A typical large scale coal fired plant will have up to four generators, each capable of generating between 500 and 660MW. For a typical 70’s technology generator, that 660MW is the largest power rating currently in use.  It takes a lot of energy to turn something so incredibly heavy at such an extraordinary speed.

It’s all depends on steam.

The rotor is the critical part, and more wire loops means more electricity. If you pass a wire capable of carrying an electric current through a magnetic field then a current will be induced to flow along that wire. You will get a larger electromotive force, and thus a larger current flow, if you scale everything up. More wire will give us more current and more power, but then the rotor is harder to push through the magnetic field. Likewise, stronger magnetic fields or higher speeds of rotation also give more power. So in a sense, the heavier the better.

Place a number of magnetic poles around a shaft, cool the area so the magnetic field is stronger, and wrap those poles in current carrying wire to further intensify the magnetic field. Then add series of these poles along the shaft, and rotate all that at high speed. This is the rotor of a typical generator (in actual fact, a turbo alternator).

This high speed rotor then induces power into the stator, huge amounts of wire wrapped in a shell around, but not touching the spinning rotor. To turn the rotor we need a very large multi stage turbine. To drive that turbine, we need a huge amount of high temperature, high pressure steam. Coal is what boils the water to make that steam.

What makes USC different is the huge amount of high temperature and high pressure steam it can produce.

UltraSuperCritical. What does that mean?

The critical point of water occurs at 374C at a pressure of 22.1 MPa (3,208 psi), where liquid water and steam become indistinguishable. Above that point (Super Critical and USC), the water does not need to boil to produce steam. So, not only do you need less coal to make that steam, you now also have a saving in water use as well, as it does not need to boil.

The USC units currently in use in China are operating at 600C and 27MPa. In fact China is actively working towards advanced USC, with temperatures above 700C in the range of 760C. Like the U.S., Japan, South Korea and Germany, China have now all but perfected the technology. Originally it was imported, and in cooperation with non Chinese companies, but they are now proceeding on their own. China has already got to the stage where they have a number of plants with units driving 1000MW generators, the first to do so. They are further working towards generators with a capacities of 1200MW and even 1350MW, levels previously thought unattainable even with large scale nuclear power.

This graph shows the steady improvement in electrical power generation. Note the top black line (the MegaWatts size of the plant) is not linear. People were building plants in the 1950’s of 5 – 10 MW. Now we’re building 1000MW plants.

Australian power is mostly coal, and mostly old and inefficient

The ones they already have in operation are running at a CF of 92.3%, something previously only the province of (some) nuclear power plants (page 31 of the above pdf link).

Australia produces about 75% of it’s electricity with coal, and it amounts to about 27,000MW of power. Our four largest generators are all pre-1975 technology.

Coal generates 75% of all Australian electricity

What USC technology means is that higher power generators can be used for significant reductions in CO2 emissions, and as the technology moves to the next stage, even less coal needs to be burned to make the immense amounts of steam required to drive smaller generators that produce more power.

And the cost? In China these plants are being constructed for a capital cost of $USD600 per KW, so around $1.2 Billion for a 2000MW plant (page 28 of the above pdf link). In Australia, Bayswater Power Station is planning an upgrade (it is the only one that is) and the cost would be about twice that of China.

That ONE generator shown in the top image produces 25% more power in a year than every wind tower in Australia.

So USC is a technology that is sorely needed for the huge amount of cheap power it generates. In addition, it actually lowers emissions of CO2 per unit of delivered energy, and almost by the amount the Government has targeted for 2020. (As if we need to reduce CO2 emissions in the first place.)

Nuclear power plants typically have generators capable of driving huge generators capable of 1000MW+. They can do this because the nuclear process can make huge amounts of steam to drive a huge multi stage turbine, a lot larger than for a large scale coal fired unit. If you were to connect one of those 1000MW+ generators to a 70s’ technology coal fired unit, it would not even turn, because they could not make the steam to drive the turbine to spin the weight of that rotor.

The same applies with Concentrating Solar Power (CSP). You cannot connect one of those large coal fired generators to a solar plant, because the solar plant cannot make enough steam to drive the turbine needed to make the rotor rotate. You could have square miles of mirrors all focused to the one point to heat the compound to a molten state, which is then used to make steam, to drive the turbine, which drives the generator which produces the power. In fact, the best this CSP can manage is around 250MW, and even that is usually from 5 X 50MW generators. With the enormous added cost of heat diversion so they can (theoretically) generate power for the full 24 hours, they can only make enough steam to drive one of those 50MW generators. The best they have been able to do so far is around 18MW, and even that is not on a year round basis. Averaged over a full year, it works out at around a 66% CF, which equates to barely 16 hours a day. So on perhaps the day with the longest available sunlight in midsummer, it could run through the night and give a full 24 hours of full power, but in winter, even with heat diversion, even these units barely manage 8 hours equivalence at full power.