File this under: What don’t we know? 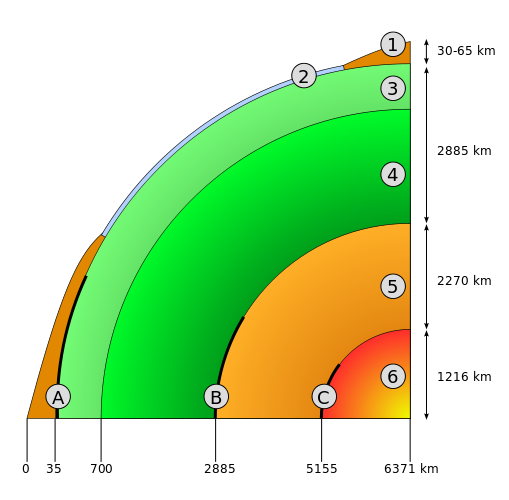 You might have thought that photosynthetic life forms had the Earth covered, but according to some researchers the largest ecosystem on Earth was just discovered and announced last Thursday, and it’s powered by hydrogen, not photosynthesis.

The Oceanic Crust is the rocky hard part under the mud that lies under the ocean. It covers 60% of the planet and it’s 10km thick. (The oceans themselves are a paltry 4km deep on average.) We’ve known for years that the isolated hot springs in trenches held life. But who thought that all the hundreds of thousands of square kilometers of basalt rock in between had its own life cycle? Last week a group from the Center for Geomicrobiology at Aarhus University, Denmark announced that they had drilled through crust that was 2.5km underwater and 55 km away from anything that mattered. They found life in the basalt.

“We’re providing the first direct evidence of life in the deeply buried oceanic crust. Our findings suggest that this spatially vast ecosystem is largely supported by chemosynthesis,” says Dr Lever, at the time a PhD student at the University of North Carolina at Chapel Hill, USA, and now a scientist at the Center for Geomicrobiology at Aarhus University, Denmark.

The microorganisms we found are native to basalt,” explains Dr Lever.

We have learned that sunlight is a prerequisite for life on Earth. Photosynthetic organisms use sunlight to convert carbon dioxide into organic material that makes up the foundation of Earth’s food chains. Life in the porous rock material in the oceanic crust is fundamentally different. Energy — and therefore life’s driving force — derives from geochemical processes.

“There are small veins in the basaltic oceanic crust and water runs through them. The water probably reacts with reduced iron compounds, such as olivine, in the basalt and releases hydrogen. Microorganisms use the hydrogen as a source of energy to convert carbon dioxide into organic material,” explains Dr Lever. “So far, evidence for life deep within oceanic crust was based on chemical and textural signatures in rocks, but direct proof was lacking,” adds Dr Olivier Rouxel of the French IFREMER institute.

Even though this enormous ecosystem is probably mainly based on hydrogen, several different forms of life are found here. The hydrogen-oxidising microorganisms create organic material that forms the basis for other microorganisms in the basalt. Some organisms get their energy by producing methane or by reducing sulphate, while others get energy by breaking down organic carbon by means of fermentation.

These bugs are not the same ones in the sea water. There is no oxygen, and while they are in old rocks, they are not fossils

Dr Lever’s basalt is 3.5 million years old, but laboratory cultures show that the DNA belonging to these organisms is not fossil. “It all began when I extracted DNA from the rock samples we had brought up. To my great surprise, I identified genes that are found in methane-producing microorganisms. We subsequently analysed the chemical signatures in the rock material, and our work with carbon isotopes provided clear evidence that the organic material did not derive from dead plankton introduced by seawater, but was formed within the oceanic crust. In addition, sulphur isotopes showed us that microbial cycling of sulphur had taken place in the same rocks. These could all have been fossil signatures of life, but we cultured microorganisms from basalt rocks in the laboratory and were able to measure microbial methane production,” explains Dr Lever. Dr Jeff Alt of the University of Michigan at Ann Arbor adds that “Our work proves that microbes play an important role in basalt chemistry, and thereby influence ocean chemistry.”

I’m sure the U.N. will be getting a team over there next week… I don’t think they’ve got these rocks in their models.