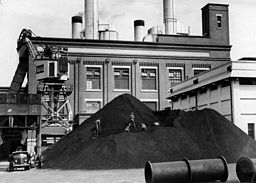 Coal power provides most of our electricity and despite widespread floods these plants have to keep working day in and day out to provide our baseload power.  | This one above is the old decommissioned “New Farm” Coal Power Station (1942)  |  Queensland State Library

Anton Lang cuts the numbers, and finds that while the Australian floods cut power consumption by 9% on the Eastern seaboard they only reduced CO2 emissions by 0.9%.

Even if cutting CO2 emissions was useful, it’s much much harder than most people realize. Electricity use is so pervasive that even though whole towns were off-the-grid due to floods, and real consumption fell, it didn’t make any difference to emissions. That’s because the baseload consumption is still so high, and is mostly still a coal powered load. Reducing the peak use of electricity by a whopping 9% hardly makes any difference to the total daily curve of electricity demand. The electricity for the peak load comes from natural gas, a bit from hydro, and some from intermittent unpredictable renewables. Coal can’t be switched up and down quickly, and it isn’t efficient to do so, even if it were possible to ramp up or change the massive coal-fired electricity stations on an hourly basis.

Here Anton wrote to me saying how surprised he was that, in the end, all those people who were cut off from electricity at home or at work during the East Coast flooding in January didn’t help reduce the Australian carbon footprint. This perverse result shows that many “green” energy saving projects are a waste of time. The only thing that counts are long term reliable reductions in baseload electricity.

Sounds hard to believe doesn’t it? Electrical power consumption can be cut by what seems to be a large amount, and yet it results in a barely noticeable reduction in CO2 emissions.

While researching data on power consumption, I was looking at the data for power consumption during January 2013, looking at all the daily power load curves for every day, and from that, noting the Base Load, The Peak Power and the Average Power consumed during each day.

While I was looking at this data, I noticed that around the Australia Day Long weekend, peak consumption and the daily average fell off somewhat, and curious, I realised that this was the week of the major flood event on the Eastern Sea Board.

Look at these two graphs. One is for the Tuesday immediately prior to the flood, and the second is for the following Tuesday, when the flood event was at its peak.

Electricity demand before the flood.

Electricity demand during the flood. Spot the difference.

The data for the 24 days up until the flood started showed the minimum constant at 18000MW, and that Base stayed the same for weekends as well. As that is the minimum, everything below that is the absolute requirement for every day, and is the same all year round, and has been at that level for almost four years of data that I have access to. This is the Base Load.

[Note from Jo: I asked Anton if the baseload fall to 17,000MW seen in the graph was significant. He replied that the generation of the coal fired plants would have been the same regardless, saying: “Those coal fired plants stay running at their maximum operating speed all the time, burning the same amount of coal no matter what, hence emissions from that sector stay the same. “ – Jo]

Now, for the 7 days during the Flood event, the Base load was again 18000MW, excepting two days at 17000MW, the Sunday, and the Australia Day Monday Public Holiday.  The Peak Load average during the flood came in at 25000MW, an average daily reduction of almost 9% over the 24 day average prior to the flood. The average daily consumption came in at 22000MW, also a 9% reduction.

So then, can we work out any emissions reduction from that data?

Here, we work on Peak Power only, as this is where the reduction is.

Note how even during the flood, the Base Load remained the same at 18000MW. All of that is supplied from coal fired power, with a small amount from Hydro and Natural Gas Plants.

Peaking Power is everything above that daily minimum. This power is provided, in the main, by Natural Gas Fired Power plants. These plants come on line as required, and that usually tops out at about 6 hours a day, for the Peak consumption periods of time. These Natural Gas (NG) Fired Plants emit (on a MW for MW equivalency) only one third of the CO2 emitted by equivalent MW size coal fired plants.

That reduction in Peak Power came in at around 2000MW, which amounted to that 9% reduction.

So, using an equivalent emissions calculation, then that means the equivalent of one 2000MW coal fired plant with only one third of the emissions and for a quarter of each day. So now we have this calculation:

Now all we need to know is the total daily emissions for that Base Load component.

That Base Load of 18000MW is the equivalent of 9 large scale plants, and here we use the average of 6 million tons of coal burned per annum by an average 2000MW plant, so the calculation for that is:

Part of that Peaking Power comes from Wind, solar, hydro, and Natural Gas, and some extra from those large scale coal fired plants over and above the Base Load, so let’s say two thirds of that (non flood average Peak) 9300MW is NG, so daily NG emissions added to the coal fired power come in at around 12000 tons of CO2, so now we have an average daily emissions from the generation of electrical power of 437,000 tons of CO2.

During the flood, there was a reduction of 3913 tons of CO2 on average each day.

This was a major flood event, and the reduction was due to tens of thousands of consumers from all sectors, Residential, Commerce and Industry having their power cut off, which, in effect, is the same as any reduction in electrical power consumption.

What can we learn from this?

What is plain to see is that any reduction in consumption comes off the Peak power total, and a large percentage of Peak Power is provided by Natural Gas Fired plants, the lesser of power plant emissions, and they operate for only part of the time as well, so any reductions in CO2 emissions are always going to be only minimal, even for large reductions in power consumption.

The Base Load is all supplied from coal fired power, the source of the largest emissions in the power generation sector, so to make any inroads into CO2 reductions, you need to reduce the power provided from that sector. However, note that Base Load of 18,000MW. That figure is not just the power these plants generate. That is power that is actually being consumed. It has been at or around that figure of 18000MW for the 4 years of data that I have access to. That power is being consumed 24/7/365.

You cannot replace that level of 24/7/365 power with renewables, as their power delivery is only tiny by comparison, and variable at best.

As shown with what happened because of this flood event, you can have a relatively large reduction in power consumption, and an almost negligible reduction in CO2 emissions, so cutting back on consumption has proved to not be the answer, if there is a problem with CO2 emissions in the first place.

So, when politicians with a barrow to push tell you there has been a reduction in power consumption, and from that, their CO2 Tax is having an effect, be totally aware that any cuts in CO2 emissions are all but negligible. The main reason there has been any reduction in power consumption, if at all, is because people are consuming less because their power costs more, and why does it cost more? Because electrical power is more expensive because of the added cost of that CO2 Tax, a tax that I have shown here is doing nothing to actually lower emissions by anywhere near what they hope it will do.