UPDATE: Richard Muller, the man running BEST (Berkley Earth Surface Temperatures) pretends to have been a skeptic who “converted” to believing in man-made global warming. But this was a fake narrative, easily shown by his past quotes. Many major newspapers ran with his propaganda, but now are trying to cover up their failure as “fact checkers”. They did not even do the most basic of investigations. And let’s not forgot that virtually none of them (or Muller either) point out his daughter profits from consulting on “Green” projects.

It appears skeptics are getting to the Fairfax press (finally!)

The Sydney Morning Herald and The Age both ran with Muller’s claims of being a converted skeptic who found the world was warming (and the preposterous leap that “therefore” we were to blame).

The SMH even arranged triumphant artwork, the article was given a big splash. But hello, hello, those articles are disappearing down the memory hole. Presumably neither newspaper is proud of having been fooled by Muller — the articles were so quickly blown away when skeptics pointed out that Muller was a  fake skeptic, and that his results were highly dubious (special achievement award to Anthony Watts). It can’t help that the other BEST co-founder turned out to have had a career consulting about carbon footprints and green schemes.

If there were hundreds of comments under those articles, they are all gone too.

The original story is still at Berkley Blogs. The story appeared on The New York Times. 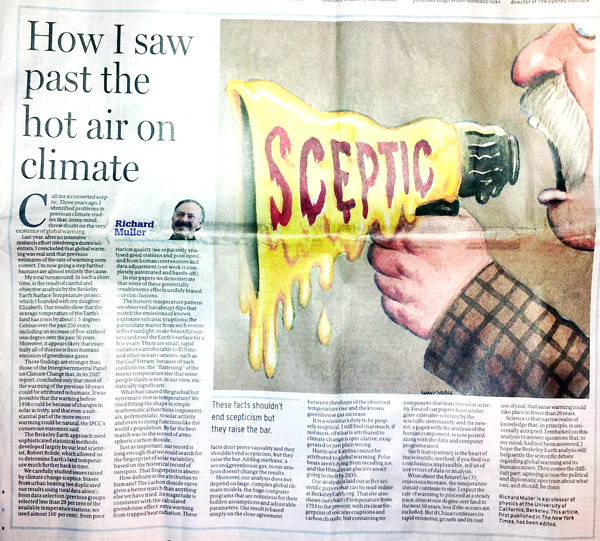 Hat tip to reader Hereward Fenton who edits Truth news for the tip-off and the photo above.

“Call me a converted skeptic. Three years ago I identified problems in previous climate studies that, in my mind, threw doubt on the very existence of global warming. Last year, following an intensive research effort involving a dozen scientists, I concluded that global warming was real and that the prior estimates of the rate of warming were correct. I’m now going a step further: Humans are almost entirely the cause.” (From the disappeared article.)

If the SMH and Age have been burnt by the Muller experience, that’s an excellent development. All they had to do was check with skeptics before they ran the story and we would have told them that Muller was never a skeptic, and his results depended on thermometers near fermenting sewage vats and square kilometers of tarmac.

For the first time I was interviewed, David’s  article was accepted, and now the alarmist agitprop has vanished. (No I’m not pleased that they are trying to rewrite history, or that Muller has in a tiny way been retrospectively silenced, but I’m pleased the “disappearance” implies somebody realized that publishing without questioning it was a mistake.)

Right now, possibly, there are editors and writers at Fairfax who realize maybe they’ve been duped: the unwitting victims of monopoly science, where only one side of the story was investigated. There are reasons their subscriptions are falling and skeptic bloggers are winning awards. There’s two decades of news stories that they have not covered.

UPDATE: Gee Aye has found an App copy on the SMH site. It’s not clear whether this is a new copy, or was always there (for “apps”). The fact that all the news copies of the page went 404 for the network of Fairfax major dailies is just plain odd. It’s easy to imagine an accident taking down one copy, but not all the separate newspapers. Though, we’ve discovered all the comments across all the papers are linked into one file. (Yes if you comment on The Age your comment is posted on the SMH, Canberra times and Brisbane times too and visa versa.) We’re those comments too hot? Was this an accident? The pages have not been restored, as we might expect, nor is there a “moved here” note. Who knows? — Jo

UPDATE: People repeatedly think they have found copies of these pages. Not so! They are other Muller pages on the SMH And the AGE. They are not the one shown in the image. Those links are still 404 errors. The title is “How I saw past the Hot Air on Climate”.