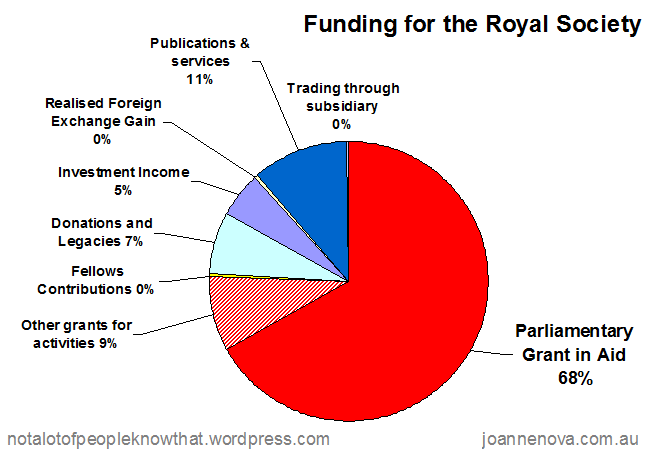 So government funding (Parliamentary Grant in Aid) amounts to 67% of total income. Similar amounts have been fixed for a 5 year period to allow the Society to plan ahead properly. It is also worth noting the income generated from commercial activities, such as investment income and publications.

Government money is channelled through the Dept of Business, who insist that it is allocated to specific projects and programmes. Most of this is therefore paid out by the Royal Society in the form of research grants etc. However in 2010/11 £2,265,000 was allocated to “Support and Central Expenses”, in other words overheads costs.

Homewood goes on to list the surprisingly high salaries on the gravy train. Since 2005, the number of employees earning more than  £60000 pa has jumped from three to 10. If some of the salaries depend on the river of climate money, then that’s a fairly strong incentive to search for a crisis.

But even the money that goes to the researchers can influence the Society. Who wouldn’t want to be The One deciding which projects get funded and which do not? Who would not want to be wined and dined, or at the very least, treated with warm handshakes and beaming smiles? Those holding the purse strings become somewhat immune from public criticism — at least from any scientists who fancy their chances at being given a grant. There is a status and exulted nature about being the gate-keeper, not least, because you can also direct the money stream to projects that will foster, perpetuate,  and escalate that money flow…

I’m not saying anyone is behaving badly “because of the “funding”. But that the Royal Society is clearly not “independent”. Where is that last true science association funded only by members, with issues decided by a vote from most members?

Andrew Montford has done the thorough study of just how bad things have got.