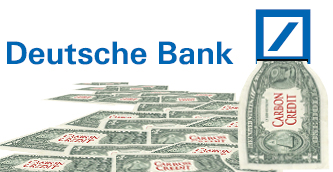 Profit through regulation of markets

Which caring environmentalists are trying to save the world through carbon credits? That would be the Banksters. Watch how the banks  are working to “fix” the free market, via intervention and regulation, and milk the system to maximize profit. The so called capitalist pigs are really working in the style of the Soviets.

How sick is the EU carbon market? “It’s a dead man walking” according to Johaness Teyssen, chairman of EON.

Carbon permits plunged to a record after European Union data showed emissions from factories and power stations in the region fell more than expected last year amid milder-than-normal weather.

EU carbon for December dropped 11 percent to close at 6.34 euros ($8.45) a ton, the biggest loss since April 28, 2006 on the ICE Futures Europe exchange in London. The previous low was 6.38 euros on Jan. 4. Power-industry emissions dropped to 2009 levels, said Matteo Mazzoni, an analyst for NE Nomisma Energia Srl in Bologna, Italy.

“That is the elephant in the room,” he said today by e- mail. “And then, of course, you have stagnating industrial production.”

But wait. Isn’t “lower industrial output” what the system was supposed to create? Isn’t that the aim — to reduce those evil carbon emissions?

The Verified Emissions Data (CED) released by European authorities showed a 2.4 per cent drop in emissions in 2011, nearly twice the fall expected by analysts. A variety of explanations was given, including unusually warm weather and the economic downturn, but what surprised some analysts was the 3.1 per cent fall in emissions from the power sector when a 1.6 per cent increase had been anticipated, particularly after the closure of nuclear power stations in Germany.

In fact, German emissions fell 1 per cent overall, and emissions from its power sector were down 1.9 per cent. Fossil fuel generation in France slumped 11 per cent. Analysts said because France had completed only 25 per cent of its data, the fall could be greater.

But it was never about the environment, and instead of being pleased, for carbon market players, the price has become too low to make a decent cut, and to help their $200 billion renewable investments thrive.

So what do “environmental agencies” like, say, Goldman Sachs, Deutsche Bank,  and HSBC, do? When the price in the market is wrong, they ask the government to sweep out a slab of the products on sale so that they get the price they want.

Deutsche Bank analyst Mark Lewis said “the data underlined the need for urgent action to be taken by the EU to “re-establish scarcity.”

“Now more than ever, the only value in EUAs lies in their political optionality,” Lewis said. He cut the bank’s forecast price range to €5-7/tonne from €6-9/t previously. Gray agreed: “Any hope that the EU ETS could organically shake-off oversupply was officially crushed today, putting the spotlight back on supply reduction proposals.”

Deutsche Bank went on to say that even removing 1.2 billion credits would not be enough.

“While a set-aside would undoubtedly be the most pragmatic way of re-establishing meaningful price tension in the near term, we do not think it would be enough, on its own, to re-establish the longterm credibility of the scheme.”

Oh and then there is the long term paradox of this market, the more it succeeds, the less it is worth:

EU plans to reduce energy use, including measures such as household insulation, may further increase the oversupply in the market as less energy is used and so fewer permits are required

Deutsche Bank — A Wunch of Bankers