Clouds cool the planet as it warms

Clouds cover an enormous 65% of the planet and are responsible for about half of the sunlight that is reflected back out to space.[i]  The effects of clouds are so strong that most of the differences between IPCC-favoured-models comes from the assumptions the models make about clouds. Cloud feedbacks are the “largest source of uncertainty”.[ii] Numerous studies show models project wildly different results for clouds, and yet few could correctly simulate clouds as recorded by satellites.[iii] One researcher described our understanding of cloud parameters as being “still in a fairly primitive state.” [iv]

Sunlight that travels 150 million kilometers can be blocked a mere 1km away from the Earth’s surface and reflected back to space.  The situation is complicated though, because clouds also slow the outgoing radiation — which has a warming effect. In general lower clouds are thicker and have a large cooling effect, while higher clouds are thinner and tend to trap more heat than they reflect (i.e. net warming).  Observations show the cooling effect of clouds dominates the warming effect. (Allen 2011[v]) which means that, in general, more clouds means more cooling.

When cloud changes have been measured, measurements show that, in the short term, as the world warms cloud cover tends to increase.[vi] ,[vii]  Satellites monitor the radiation leaving the top of the atmosphere. During 15 strong swings in temperature, Spencer et al 2007[viii] showed the high ice clouds decreased, allowing more radiation to escape to space. Spencer found a strong negative feedback and concluded that the net effect of clouds is to cool the ocean-atmosphere system during its tropospheric warm phase, and warm it during its cool phase. That is, clouds moderate or dampen temperature movement in either direction. Tropical clouds buffer the world somewhat from sharp temperature shifts.

Other researchers have found positive feedback when analyzing clouds, but usually focused on a small region of the globe, not on the whole tropical band where the most important effects take place. If clouds provide negative feedback, they will moderate any man-made climate changes.

How could clouds not cause climate change?

It seems hard to believe but the IPCC (and Andrew Dessler in particular) assume clouds respond to climate change, but can’t cause climate change. In other words, they assume there are no other factors which could change cloud cover (and which would therefore force the global temperature up or down). It is well known that assumptions are the mother of all foul-ups, and this one reeks.

Clouds might not just be a negative feedback instead of a positive one, they might be a forcing factor themselves, making all the estimates of climate sensitivity incorrect.

The IPCC models assume that clouds change in response to temperature, so they are a “feedback”.[ix]  In other words, they categorically rule out any possibility that some other factor might change cloud cover, which would in turn, warm or cool the Earth. (Why? Just a convenient assumption.) But if ocean currents or wind patterns changed, that would affect evaporation and cloud formation. If cloud seeding nuclei rose or fell, that too would affect the number of clouds and potentially change our weather.

There is plenty of evidence that other factors affect clouds, and thus could be driving global temperatures, not CO2. For example, cloud seeding particles are formed by cosmic rays[x] which in turn are affected by the solar magnetic field[xi] [xii]. This would explain why river flows correlate with sunspot activity.[xiii] ,[xiv] Sunspots occur when the solar magnetic field is active. Fluxes in the heat content of the ocean, and sea levels also correlate with the solar cycle.[xv] Even 200 years ago, the connection between the sun and wheat prices was notable.[xvi]

Spencer & Braswell use the most simple of models to show that unaccounted forcing factors would make it impossible for the global climate models to estimate feedbacks, and calculate climate sensitivity. [xvii] [xviii] [xix]  They demonstrate that clouds can be a forcing factor as well, and that the IPCC climate models significantly overestimate warming.

Spencer & Braswell demonstrate that it’s very difficult to find definitive feedback signals in a dynamic system that is never at equilibrium. The only feedback they can calculate in their 2008 and 2010 papers is negative and means a climate sensitivity of about 0.6°C for a doubling of CO2, though it’s only applicable over short time-frames. They demonstrate the near impossibility of establishing climate sensitivity over long time frames. But if climate sensitivity to CO2 is as low as they find, and dwarfed by potential cloud forcing, it would mean no postponed effect from CO2. We have had all the effect there is and there will be no stored heat lying dormant to cause future climate change. This would explain Trenberth’s concern, expressed in the CRU e-mails, that the pro-global warming scientists “can’t account for the lack of warming at the moment and it is a travesty that we can’t”.

Spencer & Braswell’s 2011 paper  confirms the difficulty in sorting out what is feedback and what is forcing, finding that it is not possible with current methods to separate the two.  Neither the most nor the least sensitive models could predict the changes in energy before or after changes in temperature. 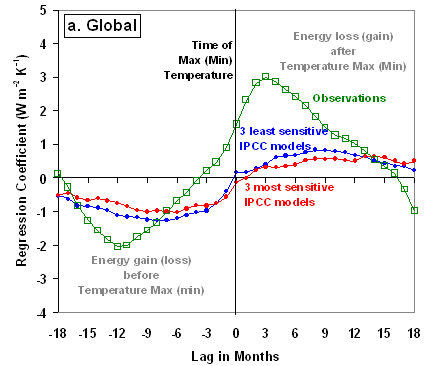 I found the best descriptions of what Spencers’ work means in a document by Ken Gregory: Clouds Have Made Fools of Climate Modelers

[v]  Allan, R [2011] Combining satellite data and models to estimate cloud radiative effects at the surface and in the atmosphere. University of Reading [Abstract] [Discussion]