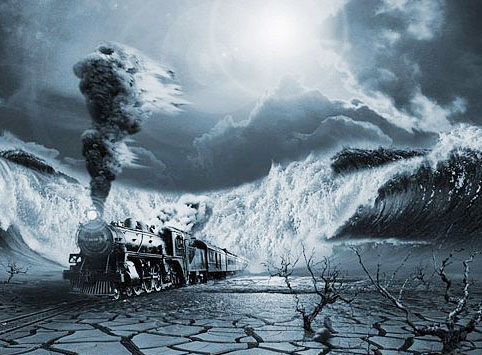 I just love some of these terms. Verity Jones (Diggingintheclay) and E. Michael Smith (Chiefio, see the postscript) are rolling on a neologistic wave, and they’re generating something special. The comments thread on Diggingintheclay is quite abuzz (and this comes from both that and Chiefio’s thread).

Cliflation: The tendency for anything climate related to be inflated in importance, size, warming tendency, etc. (I think the pronounciation doesn’t capture the “climate” origin, hence I suggest “Climaflation” — as in “The clown fish research has been Climaflated.”)

Empixelated: To uncritically believe anything presented to you by the pixels on your screen. “Jones was sure Mann would be empixelated by the latest runs of HADcrut”. (I think this needs a different example: The  Department of Climate Change produced brochureware websites designed to empixililate unsuspecting taxpayers.) (H/t Another Ian for the word “empixilated”)

Envirallax (noun) – the apparent shift in importance of a report, quotation or publication related to climate science due to the difference in belief or opinion on the causes of climate change between two readers (cf. parallax). Related terms – biased interpretation, confirmation bias, cognitive dissonance.). Alternate definition: That peculiar tendency to see things shifted through an environmental filter just out of kilter. Political parallax. (I like it. Methinks this word will stick, credit to Verity Jones.)

Farigle (verb): To inexplicably adjust data that is far enough away that nobody will notice, or, alternately,  to alter data originating in a place distant from a research facility and difficult to verify, especially after the passage of time.“After farigling the Arctic Data, trends were warmer.” (ht Verity for the word, Judy F for the second definition).

Googlehuffing: To manipulate search engines so as to rank an article (especially one about climate) extra high for political / monetary purposes. “AlGore asked the programmer to googlehuff his latest book”. A non-standard usage is to down rate articles by skeptics or with a skeptical point of view. “Algore demanded WUWT be googlehuffed into the 20th page”. (credit Chiefio).

Panixilation: (Br. Sp. Panicselation) That peculiar tendency to turn anything into a Panic Attack, especially with some exhilaration about it. Often seen in the Warmers World. “Hansen was clearly panixilated about the coal trains”. (h/t Chiefio for this excellent word).

Wikimentia: A kind of dementia commonly seen in wiki articles reflecting bias in the various sorts of delving into too much detail, not enough detail, making up detail, deleting inconvenient facts, and generally being politically driven to excess.

Doomian (Doomsian): The world view that says anything we do can only lead to doom. Related to panixilation, but more operative in that an actual outcome of doom is predicted. Doomers is a related noun form. “The doomian result was clearly sea level rise of 1000 meters and the loss of all islands in the Pacific.” Or even “Jones, a clear doomer, looked at the printout, panixilated, and said ‘The end is near!’; yet Smith just thought him doomian.” j ferguson suggests “the Apocolypsters” and “Catastophers“. (The French came up with that already: catastropher vt. to devastate). Catastrophobes could study Catastrophology?

(I note that there is a facebook group for Realitizers already – they specialize in bending the fabric of space time salad… . Hmm. Membership of 1.)

“Twas a gray coldening day, and Hansen was farigling the Arctic Data, empixilated with his handiwork and hopping for more geldbalm to dampen the panixilation he was feeling. But it was not to be. The cliflation of all things warmist extended even to angst, and his doomian acolytes were mid-paroxysm even as his fariggled. He pressed ‘enter’ on the climaking code. Oh, so shadenfreuded was he that even his adjixtered data did not break the spell of his enviralaxed state. But how to googlehuff the results? Email was right out as being foiaed was not to his liking. No, he would have to wait for the next ngovent when a prideal could be jobbed… Later a prvent would glossgeld the whole processes far from macintyreation… “

Geldbalm: To be soothed by the application of money.

And Entorporant: A substance that causes increased torpor, such as too much buffet food at the latest IPCC extravaganza… or the application of so much geldbalm that one just sits in their office and ignores FOIA requests…

What other situations do we repeatedly describe which we need a shorthand for?
…
Don’t forget to pop in at Diggingintheclay and Chiefio to join in the wordfest (and do see Chiefio’s discussion of the history of farenheit v celcius and the development of thermometers) .

Fundify (or Fundation) : The process of taking any concept and linking it to a source of funding.

Sexstrapolation: an adjustment to numbers that goes beyond just extrapolation — “sexing up the numbers”.

Exfactofy: the process of removing facts from fiction

Climathetics: A sub-species of climatology where climatologists actions can be construed as nothing but a stunt and therefore pathetic. [ie: Gore & Hansen go to Antarctica]

Trenberthian Heat:
Mysterious energy source on the one hand so powerful it can wipe out the entire planet in a heartbeat, while at the same being so subtle as to be undetectable by even the most sensitive instruments. Sort-of the climate science equivalent of antimatter.  A parcel of Trenberthian Heat is known as a ‘Travesty’.

The unshakable belief that somewhere out there, there is still a philanthropic individual or organisation that can be screwed over for a few more dollars to study the failed tropospheric tropical hot spot theory.

Mannipullation; adding 2 unrelated graphs together to get a misleading image.

Goreblimate; (verb) to make unbelievable statements to panic the gullible

datadisation:  the bastardisation of data to suit a cause. eg “after datadisation 1934 was “discovered” to be cooler than 1998.”

X-posted from Digging in the clay: