David Archibald, polymath, makes a bold prediction that temperatures are about to dive sharply (in the decadal sense). He took the  forgotten correlation that as solar cycles lengthen and weaken, the world gets cooler. He refined it into a predictive tool, tested it and published in 2007. His paper has been expanded on recently by Prof Solheim in Norway, who predicts a 1.5°C drop in Central Norway over the next ten years.

Our knowledge of they solar dynamo is improving, and David adds the predicted solar activity ’til 2040 to the analysis. Normal solar cycles are 11 years long, but the current one (cycle 24) is shaping up to be 17 years (unusually long), and using historical data from the US, David predicts  a 2.1°C decline over Solar Cycle 24 followed by a further 2.8°C over Solar Cycle 25. That adds up to a whopping 4.9°C fall in temperate latitudes over the next 20 years. We can only hope he’s wrong. As David says ” The center of the Corn Belt, now in Iowa, will move south to Kansas.”

He also predicts continuing drought in Africa for another 14 years, with droughts likely in South America too.

If he’s right, it’s awful and excellent at the same time. Cold hurts, but wouldn’t it be something if we understood our climate well enough to plan ahead?

Just how much cooler will it get?

Friis-Christensen and Lassen found the relationship between solar cycle length and temperature in 1991.  In 1996, Butler and Johnson applied that theory to the 200 years of temperature data at Armagh, Northern Ireland and found a relationship of 0.4°C per extra year of solar cycle length.  I showed that Friis-Christensen and Lassen theory could be used as a predictive tool in 2007.  My methodology was copied by Professor Solheim in an article for a Norwegian astronomical magazine.  His work predicts a 1.5°C decline, on average, in Norwegian temperatures over Solar Cycle 24 relative to Solar Cycle 23.

Professor Solheim has a paper in press that credits me with the discovery of the use of Friis-Christensen and Lassen theory to predict climate.  In the meantime, he has published a paper predicting a 6°C decline for Svalbard, on the island of Spitzbergen, in winter over Solar Cycle 24.  At the moment, Professor Solheim and his co-authors have the field to themselves. 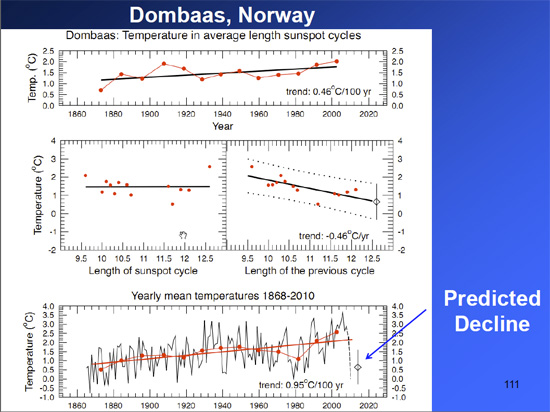 This is a figure from the paper in press, predicting a 1.5°C decline for Dombaas in central southern Norway.  In 2010, temperatures already fell to the range predicted by the paper.

Also from that paper, the predicted decline in global temperature of 1.0°C will take us back to temperatures last seen in the mid-19th Century.  All the warming of the 20th Century will be wiped out.  This prediction is at the 95% confidence level.

Professor Solheim and his co-authors have confirmed that solar cycle length is the main determinant of climate, in the correlations over the last few hundred years.  So it seems if we want to predict climate, we have to predict solar cycle length.  The length of a solar cycle is negatively correlated with its amplitude: the lower the amplitude, the longer the cycle.  There are plenty of exceptions though.  For example, Solar Cycle 23 was relatively strong with a peak sunspot number of 120, but longer than average at 12.5 years.
We can now predict solar cycle length even before the first sunspots of that cycle have become visible.  From Altrock, R.C., 2010, “The Progress of Solar Cycle 24 at High Latitudes”:

“Cycle 24 began its migration at a rate 40% slower than the previous two solar cycles, thus indicating the possibility of a peculiar cycle. However, the onset of the “Rush to the Poles” of polar crown prominences and their associated coronal emission, which has been a precursor to solar maximum in recent cycles (cf. Altrock 2003), has  just been identified in the northern hemisphere. Peculiarly, this “rush” is leisurely, at only 50% of the rate in the previous two cycles.”

If Solar Cycle 24 is progressing at 60% of the rate of the previous two cycles, which averaged ten years long, then it is likely to be 16.6 years long.  This is supported by examining Altrock’s green corona diagram from mid-2011 above.  In the previous three cycles, solar minimum occurred when the bounding line of major activity (blue) intersects 10° latitude (red).  For Solar Cycle 24, that occurs in 2026, making it 17 years long.

The total temperature shift will be 4.9°C for the major agricultural belt that stretches from New England to the Rockies straddling the US – Canadian border.  At the latitude of the US-Canadian border, a 1.0°C change in temperature shifts growing conditions 140 km – in this case, towards the Gulf of Mexico. The centre of the Corn Belt, now in Iowa, will move to Kansas.

Similar effects will be seen in China, Russia, Ukraine, Western Europe and South America.  Colder tends to be drier, so there will also be a drought effect on top of the shorter growing seasons.

That enables us to generate this graph of climate to 2040.  The blue line is the predicted annual average temperature.  The red line is that less the contribution from anthropogenic carbon dioxide.  The higher atmospheric carbon dioxide due to anthropogenic emissions have increased crop yields by 15%, so it is not completely useless.

The last time we saw solar cycles as long as Solar Cycle 25 is projected to be was in the Maunder Minimum.  Solar Cycles weren’t seen at the time due to a lack of sunspots.  They are inferred from cycles in C14.

The last time the World had a significant cooling event was in the 1970s.  That resulted in some research of what would happen to agricultural productivity in the event of cooling.  Above is a map from some of that research showing the thermal limit to wheat growing in Canada as the stippled line and what that would shrink to in the event of a one degree decline in temperature.  A 2.1°C decline is predicted over Solar Cycle 24 and a further 2.8°C over Solar Cycle 25.  The prognosis for Canadian agriculture is not good.

The prognosis for other continents isn’t good either.  Early in the 20th Century, it was noticed that there is a strong relationship between sunspot activity and the level of Lake Victoria in East Africa.  Then the relationship broke down for 40 years before resuming in the 1970s.  Parts of East Africa are currently in drought.  Our prognosis of solar activity suggests that will continue for at least another fourteen years.

Colder is drier in South America too.  The Parana River is the second largest river in South America and enters the Atlantic between Paraguay and Brazil.  There are historical records of people being able to walk across it at times in the 16th century.  Two Argentinian researchers found a relationship between sunspot number and Parana River streamflow.  That relationship and our prediction of solar activity point to a long drought coming for central South America.

His new site about the development of  North and Western Australia: http://www.durackdevelopment.com

David Archibald has also posted on WUWT: “The Message in the Dye 3 Data“ and yesterday with First Estimate of Solar Cycle 25 Amplitude – may be the smallest in over 300 years.