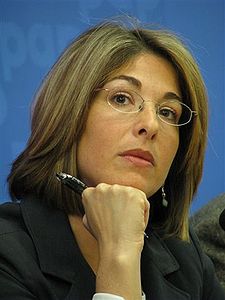 Naomi Klein was the wrong person to send to a heavy-weight science conference  — in “Capitalism vs Climate” she notices hundreds of details, but they’re all the wrong ones.

Naomi can tell you the colour of the speakers hair, what row they sat in, and the expression on their face — it adds such an authentic flavor to the words, but she’s blind to the details that count. She can explain the atmosphere of the room, but not the atmosphere of the Earth. One of these things matters, and Klein has picked the wrong one.

Her long attack on the Heartland ICCC conference this year is all color and style, and nothing of consequence — the lights are on and no brain is home.  Unpack the loquacious pencraft and we wallow in innumerate arguments that confuse cause and effect, peppered with petulant name-calling. She can throw stones, but she can’t count past “one”.

Her aversion to numbers is crippling

Consider how she reduces planetary dynamics to a Yes or No answer. She thinks each skeptical scientist contradicts the next: “Is there no warming, or is there warming but it’s not a problem? And if there is no warming, then what’s all this talk about sunspots causing temperatures to rise?” But oops, Naomi, the numbers matter, numbers like how much warming, and how many years are we talking about.

Is the planet warming? Well, since when, Naomi, since when? You might only be able to answer “Yes”, because that’s the ritual litany you’ve been trained to say, but independent scientists talk about whether it’s cooled in the last 10 years, warmed for the last 300 and changed since William the Conqueror. When it comes to the warming in the last century, is it by 0.7 C or is it really 0.5? This is where the scientists at the Heartland conference were at.

Like a color-blind art critic, it’s as if any number bigger than zero or one went right over her head.

Her thesis sinks quickly to a parody of intellectual wit. Naomi thinks she can understand planetary radiative physics with psychoanalysis. (Essentially she knows she’s right because those who disagree vote the wrong way too).

Those with strong “egalitarian” and “communitarian” worldviews (marked by an inclination toward collective action and social justice, concern about inequality and suspicion of corporate power) overwhelmingly accept the scientific consensus on climate change. On the other hand, those with strong “hierarchical” and “individualistic” worldviews (marked by opposition to government assistance for the poor and minorities, strong support for industry and a belief that we all get what we deserve) overwhelmingly reject the scientific consensus.

Unwittingly she’s admitting that she picks her scientific theories according to her political aims.

She believes those who disagree with her on the science do it because they vote differently — completely missing the obvious truth that a slab of the population can do what she can’t: that is, think.

She’s got cause and effect completely back to front. It’s not that skeptics pick their political masters, then “follow” the party line — they pick the theory and then find the right party.  Klein apparently can’t imagine doing something as radical as looking at the evidence first, then picking the politicians who don’t seem to be barking mad, gullible patsies, fawning to the latest tax-mongering fallacy. It’s frankly a bland non-event that at the moment independent -thinkers lean heavily Republican. Which Democrat can see through the scam?

Pew Poll: The turning point for Republican voters was in 2008. [Source: http://www.people-press.org/2009/10/22/fewer-americans-see-solid-evidence-of-global-warming/

You only need to look back five years when many Republicans thought CO2 was a problem as well, to see Klein’s pocket-psychoanalysis disprove itself. What changed first, the views of the Republican leaders, or the views of the voters? The answer is the polls shifted long beforethe candidates fell all over themselves to make sure no one thought they were fooled by the climate-scare. Did the Republican world-view radically change in the last five years, or is the Democrat worldview stopping people from admitting they were wrong?

Bad manners always say more about the speaker than the target. Klein deceives herself with her name-calling “denier”. She can’t name anything scientific that the so-called deniers deny. Instead she fell for the Richard Muller blatant fakery, where he pretended to be a skeptic, then was so conveniently converted. She’s the one denying that he was always a fan of the IPCC, and always thought CO2 was pollution.

The myth that Big-Oil drives the skeptics is manna for the confused, who can’t fathom why so many people don’t pander to the same messianic saviours that they do. Klein obediently totes out the “$900 billion” the top five oil corporates make in profits, but completely ignores the $10 Trillion market in carbon credits that a global trade could have produced. Again, the numbers are just too complex for her — Exxon and friends might lose 5 or 10% of their bottom line to the monster carbon market, but the carbon market fans lose 100% of their profits if the big scare is exposed as a fake. There’s ten times the money pushing for a carbon market, and Klein blindly acts as a sock puppet for the big financiers.

The scientists speaking at Heartlands Climate Conference were so far ahead of Klein, they might as well have been speaking Urdu.

The entire 9600 word tome depends on one sole point: the evidence that doubling CO2 causes major warming, not just 0.5 degrees, but 3.5 degrees. (There are those problematic numbers again). Klein starts from the assumption that the way to know if the third rock from the sun is artificially warming is to parrot government scientists — hailing “Gods” appointed by the politicians. Thus everything she writes, collapses from the start. Science is not about following government appointed prophets, but about the evidence, the measurements, and the observations. The weather balloons, satellites, ocean buoys and ice cores are unanimous — the modelers-of-doom are exaggerating. Klein never goes there. Her religion doesn’t permit it, and she’d have to deal with … numbers.

When Pat Michaels suggested that airconditioners would save people from heat stroke in France, Klein called it “callous”. Why? Apparently people are dying in Africa, in droughts, and Naomi thinks that airconditioners in France are causing it. Somehow it’s reasonable for the French to die of heat-stroke on the off-chance that by switching off the air-con they might create some rain in Johannesburg. Global dumbness is scary. How could reasonable people believe this?

Her “reasoning” disproves itself

By building her whole argument on un-scientific quicksand, Klein makes mindless statements that unwittingly apply more to her own arguments than anyone elses. She explores “how the right has systematically used crises—real and trumped up—to push through a brutal ideological agenda designed not to solve the problems that created the crises but rather to enrich elites.”

No one uses trumped-up-crises better than the left: Which team is demanding billions to “stop the storms”? And which elites will be enriched? The carbon traders and financiers.

The so-called victims of right-ideologies are theoretical postulates of the future. The victims of the left are here and now. Which brutal ideology fed corn to cars instead of starving Haitian children? Which fantasy-team thinks bat-chopping rotors in Denmark will stop floods in Bangladesh?

Naomi can’t even manage to recognize a real death threat from a statement of someone who won’t cow to her faith. She recites the lines about “death-threats” but can’t even name one example of an actual threat:

Many climate scientists report receiving death threats, as do authors of articles on subjects as seemingly innocuous as energy conservation. (As one letter writer put it to Stan Cox, author of a book critical of air-conditioning, “You can pry my thermostat out of my cold dead hands.”)

The letter writer was not threatening anyone, except with his determination to set the temperature in his own home.

“Accepting the science” means religious devotion to the establishment line

Where’s the evidence that man-made emissions cause global warming? Only religious devotees think the answer starts and ends with “97% of our climate scientists say so”. That’s a logical fallacy,  it’s only 75 scientists,  and many of them will admit their models are flawed and the uncertainties are large. The consensus was fake from the start.

Klein thinks the answers to feeding the poor lies with “Big Government”, but rational thinkers know that more than anything, the fate of the poor depends on clear thinking, real evidence, and polite debate. None of which is on offer in this article.

Reading Klein is like visiting a parallel universe — her religious devotion to her ideology means nearly every sentence is the exact opposite of the truth.  More’s the pity that The Nation has no editors who recognise innumerate drivel and an ideological rant based on a logical black hole.

Bad mannered bluster, blind assumptions, and religious rationalization have always been the tool of witchdoctors and con artists.