I‘m peppered with emails asking me if articles like this one (which claims there is no Greenhouse Effect at all on Venus) could be right.

Michael Hammer has some 20 patents in spectroscopy, and he explains why the Greenhouse Effect — where CO2 and other gases absorb and emit infra red — is very real, and backed by empirical evidence. The calculations using the Stefan-Boltzmann Law on the atmosphere of Earth and Venus, argue that the Greenhouse Effect is not-detectable. But not-detectable (by that method) does not “prove” the effect is zero. Other methods — like satellite observations of Earth’s atmosphere, and countless lab experiments, tell us that the Greenhouse Effect is real. (The Stefan-Boltzmann Law is used to create the first graph below). Huffman’s calculations suggest other factors are more important than greenhouse gases (with which we heartily agree) and that Hansen et al were barking up the wrong tree by pretending that Venus “shows” us anything much about the Greenhouse Effect. (Indeed, the IPCC mention “Venus” in their first Assessment Report back in 1990 as one of the three key reasons.)

For your average reader, sorry it is esoteric, but there will be avid interest by some science-aficionados in this topic.

Joanne sent me an email to ask my opinion on the “Huffman blog”: There is no Greenhouse Effect on Venus.

Let’s start with a plot of the long wave infrared emission from Earth as seen by the Nimbus satellite.  This is not model output, it is real experimental data.  A plot is shown below: 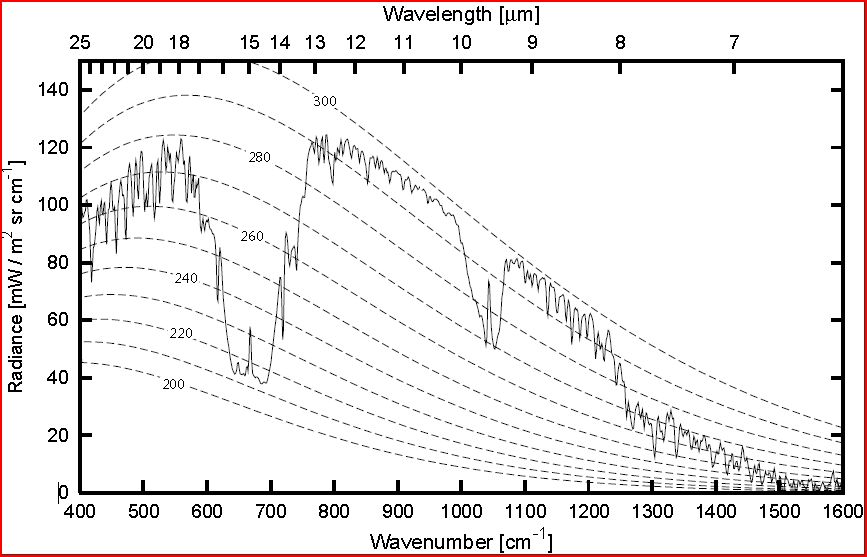 The horizontal axis shows wavenumbers, which are the reciprocals of wavelengths.  The vertical axis shows the energy density of the radiation from the Earth observed by Nimbus.  The dotted overlaid traces represent the emission spectrum from black bodies at various temperatures (calculated from Plank’s law which is known with a very high degree of surety).  Without any atmosphere, Earth’s emission pattern as seen from space would look like one of these dotted lines.

Note the big bite out of the spectrum at around 660 wavenumbers and the smaller bite at around 1000 wavenumbers.  The former is at the CO2 absorption line and the latter at the Ozone (O3) absorption line.  Those two bites represent energy that is not being radiated to space that would be if there was no atmosphere.  In short it is the signature of a green house gas reducing Earth’s radiation to space at the green house wavelengths.  I invite those who disagree to give an alternate explanation for what is causing these notches.

So how to explain the Venus data cited in Mr Huffman’s blog?  Shown below is a plot of the temperature versus altitude profile for Venus with the corresponding profile for Earth overlayed (from site http://www.datasync.com/~rsf1/vel/1918vpt.htm )

The similarly is not as close as claimed.  In fact the two profiles are only similar between 50km and 60 km and quite different at other altitudes.

OK but what about that bit between 50km and 60km – surely that’s till needs some explanation.  Well distance from the sun is not the only thing affecting received sunlight.  Venus is covered with clouds which according to the same source have their tops at an altitude of around 60 km.  These clouds give Venus an albedo of 0.6 which means 60%of the suns energy is reflected back out to space, 40%is absorbed.  Earth by comparison has an albedo of 0.3 which means 70% is absorbed.  The net difference in energy absorbed between Earth and Venus is thus the inverse ratio of distance to the sun squared time the difference in fraction of energy absorbed.

Venus only absorbs 10% more solar energy than does Earth yet its temperature at equivalent atmospheric pressure is  66C vs 14C.  The difference in black body emission is 749 watts/sqM versus 390 watts/sqM.  The close equivalence cited by Mr Huffman would appear to only exist if one ignores the difference in albedo.

The green house effect is real however that does not mean its incremental impact is anywhere near as great as claimed by AGW advocates.  The real debate is about how large the effect is.  Specifically, whether the direct effect of about 0.8C per doubling of CO2 is amplified by claimed massive positive feedbacks or diminished by negative feedbacks such as occur in all stable systems.  But that is a different issue.

Michael Hammer is an electrical engineer who has spent over 30 years conducting research for a major international spectroscopy company.  In the course of this work he generated around 20 patents which have been registered in multiple countries.  Patents are rarer and more rigorous than peer reviewed papers, only available for economically valuable work, and costing thousands of dollars to process and maintain. Spectroscopy deals with the interaction between electromagnetic energy (light) and matter and it is this interaction which forms the basis of the so called “green house effect” in the atmosphere. Other posts by Michael Hammer.

WUWT has a post by Ira Glickstein on the Greenhouse effect as seen in the emission spectra.