UPDATED with links to the speeches.

All filmed by Phil Cole and edited by Sean Morris.

There was a crowd of 3000 according to the ABC report, but Nick Bryant from the BBC estimated 4,000-5,000, and significantly he also admitted that the crowd was not a red-neck, ute crowd, and that for many it was their first protest.  For others, like one doctor, it had cost them dearly to get to the rally (see the quotes from his piece below). Such is the passion of the protesters. 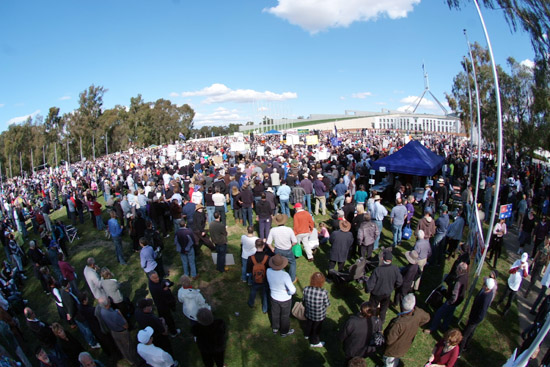 And they filled the lawns. Photo: Dr Jim Sternhell

This is mainstream Australia talking

A few things struck me about crowd. Many of the protesters were old and retired, as one would expect from a protest in the middle of the week. Many were attending their first ever protest rally, which is more significant. Rising energy bills was something that had got these first-timers out in force. Nobody that I spoke to at the rally thought the Gillard minority government had any legitimacy, let alone any mandate. Most thought it incompetent, and said the carbon tax had crystallised broader fears.

A surprisingly high number, curiously, were Brits who have settled in Australia. Many were farmers and blue-collar workers. But I also ran into a GP, who had given up $2000 in consultation fees for the day to drive down to Canberra from Sydney. In other words, this crowd could not be written off as a “red-neck mob”, tempting though that caricature might be to supporters of the carbon tax. This was an Audi estate crowd as well as a “ute” crowd.

From the BBC report:

The speakers who received the most rapturous receptions were the ones who harnessed the simmering anger of the crowd. The Liberal MP Sophie Mirabella got sustained applause when she presented the carbon tax as a threat to the Australian way of life: “We don’t want to de-industrialise our country,” she bellowed.

But it was Senator Barnaby Joyce, the barnstorming Queensland populist, who probably got the biggest cheers of the day. “There are people in Australia who stay in bed because they cannot afford to stay warm,” he shouted, as his rosy face turned a deeper shade of red. “And that is disgusting that that happens in our nation.”

“It was your birthright. We had cheap power. That is one thing we had. And we had the choice between cheap power and cheap wages and we thought we would look after the Australian people. Give them a decent wage and go with cheap power. This woman wants to turn it around.”

Thanks To Jim Simpson from the Five Dock Sceptics for the photos.