Finally, a new day has dawned and solar power is cheaper than coal fired electricity! Gadzooks! It must be true, the Sydney Morning Herald says so. 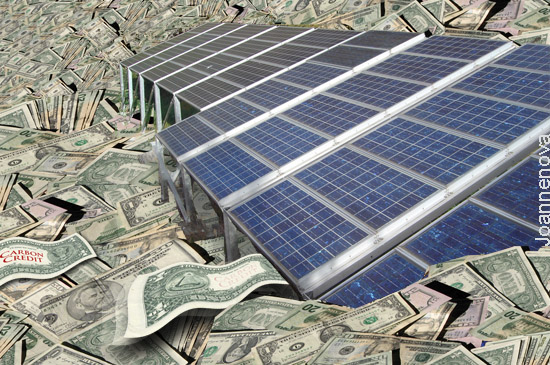 Who knew they conquered the low energy density, high maintenance, poor performance, bad weather, and general darkness at nighttime — all in the last weekend? This changes everything… oh, but wait, that’s odd — this only applies in some parts of New South Wales?

Silly me, and I thought the sun shone on the whole nation (and sometimes on the rest of the world too)?

THE cost of solar power in parts of NSW has for the first time crept below that of coal-fired electricity – seen as a key tipping point for the expansion of renewable energy. [SMH]

The dead-set give away is the “parts of NSW” — straight away you know that either someone is stealing sunlight from neighboring councils, or this isn’t a real “cost”, not in the same sense that you and I would use the word. When we think of the cost of something, it means we want to know how much we’ll pay. If we pay less up front, but five times as much tax, then the item is not cheap. And if we pay in lost jobs, ruined businesses, and damaged superannuation then the real cost cost is not just dollars but marriages and lives.

Indeed solar power is so hideously, prodigiously expensive for the people of New South Wales, the subsidies for solar electricity threaten to bankrupt the state.

Anton Lang (who writes as TonyfromOz) has the devastating numbers that  Ben Cubby, Brian Robins, or Melissa Lahoud (the SMH journalists) didn’t try to find. To understand why the words “cost effective” and “solar panel” should never be used in the same article, follow Anton’s reasoning:

The three main problems listed below: 1. Night-time; 2. pitiful average power output, and 3. worst of all — Coal is dirt cheap.

The average residence consumes about 20KWH of electricity each 24 hour period. Most of that from around 4pm until 11pm, and some from 7 – 9am. Their solar panels are hard at work (maybe, if it’s sunny) from 9am – 3pm.  Shame about the timing. Homes use about 6KWH during these possibly sunny daylight hours. And since it’s hard to store electricity, we’ve already pointed out that the main baseload power stations have to keep running anyhow, so, above a certain percentage, the more solar you put into the grid, the more CO2 you emit.

Crazy, but true, the renewables are so intermittent that by the time they try to cover 20% of the grid demand, the CO2 savings are a tiny 2%, and indeed it’s possible renewables cause our emissions to rise, because large power plants, like cars, are less efficient if they are being switched on and off rather than run at a nice predictable constant speed.

People talk about the “1.5KW solar unit”, but forget that that is not it’s actual power rating, but rather its Fabled Maximum Output (FMO) — also known as  the Chimerical Kilowatt. Clouds, dust, and the day and night cycle mean that the panels hardly ever reach the Fabled Max, and they certainly don’t average it.

…taken over a whole year, the panels have an average generating capacity of around 15 to 20% of their maximum rating, and that’s a conservative percentage if anything a little on the high side. The theoretical maximum is 38%, but very few panel systems ever achieve this.

When the news says 28c per KW is grid parity, it’s only telling you that when you buy coal powered electricity the government have stolen so much of your money that it doesn’t make any difference whether you buy insanely expensive solar units or insanely-highly-taxed coal units.

Anton puts it in perspective:

That wholesale cost of the electricity provided by most coal fired plant operators is around 3 cents per KWH.

The Victoria Auditor General showed large scale solar costs about 5.5 times as much as coal, and by the figures here, it appears that at best, rooftop solar costs at least 9 times as much. And in some contracts the “state” — possibly your state — is paying 60c a KWH for solar power when it could be buying coal power at 3 cents.

There is madness in paying 20 times as much for energy as you have too in order to appease the witchdoctors of science who say it will change the weather.

Lessons in wasting money: Use more wind and solar and… emit just as much CO2