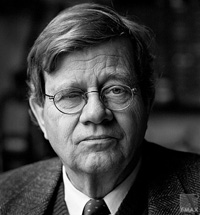 Dr Noor van Andel spoke at the Dutch Meteorological Institute (KNMI), provocatively concluding there is no observational evidence for the influence of CO2 on past or present climate. He has released a high caliber slide set. He is the former head of research at Akzo Nobel.

Essentially he uses empirical evidence to draw the conclusion that most recent climate variability is due to Pacific Decadal Oscillation, and to Cosmic Ray effect as described by Svensmark. This fits with what William Kinninmonth explained and I described as essentially a massive pool of “stored cold”  in the abyssal depths of the oceans, which erratically reaches up and pulls in heat from the insubstantial atmosphere above. Air temperatures are at the beck and call of the releases of this “cold” (yes I know cold is just an absence of heat). In El Nino years when the cold pool lies deep and unstirred, the incoming solar heat builds up on the surface.

With the oceans covering 70% of the planet and the clouds covering over 60% of the sky, water in its various forms, dominates our climate. Solar magnetic effects correlate with changes in clouds. This graph below shows the rise and fall over the last 1000 years. Both the Medieval Warm Period and the The Little Ice Age (upper graph) match the highs and lows of Galactic Cosmic rays (lower graph).

Cloud cover has reduced by 4% since 1984. This would account for a significant part of the warming since then. Less incoming sunlight gets blocked and reflected out to space.

One of the most interesting slides is this one of outgoing long wave radiation (OLR). This has risen over the last 62 years, and by a large amount. As the planet warms we’d expect more OLR, but if feedbacks are positive, we wouldn’t expect the increase to be this large. Van Andel suggests the rise is “equivalent” to reducing CO2 from 800ppm to 280ppm — in other words, whatever warming effect CO2 might have is being swamped by larger factors.

According to the models humidity ought to rise as the world warms, providing the major bulk of the positive feedback in the IPCC climate models. And it does — but only in the lower atmosphere. The rising humidity would have the largest warming effect if it occurred higher in the troposphere (thereby creating the hot spot), but specific humidity at up at 600mB has been falling, not rising — and the fall is even larger at 400mB (lower pressure means higher in the atmosphere).

Noor van Andel points out that the 800 year lag (driven by overturning oceans) and that the ice cores show no evidence of positive feedback as the world warmed from the last ice age.

On the Planetary Physics

The right physics in my opinion: We have a strongly controlled climate. The solar constant and the physical properties of water keep us controlled.

It is shown that the cooling of the tropics, or trade wind belt, is by deep convection, i.e. by a few thousand concentrated tropical thunderstorms that carry all the sensible and latent heat swept up by the trade winds all the way on to the tropopause.

The trends of the temperature in the high atmosphere in the last half century are very negative, starting on this height where the convection reaches. That means that more CO2 has a cooling effect rather than a warming effect. Cloud tops radiate much more intense than the thin air on this height.

This is the cause behind the cooling, as much as the CO2 increase.

The cooling trend is quite in discrepancy with the “greenhouse-gas-induced-global-warming”
theory, but is quite in accord with increasing deep convection. The adjustment of these temperature measurements to bring them more in line with the climate models leads to unphysical conditions and processes.

My talk yesterday for the Dutch Meteorological Institute was a great success. There were 10% more attendants than their largest conference room could contain seated, the interruptive discussion was intense, and even sometimes emotional, but always correct, because Hein Haak wielded his power efficiently to keep it that way.
KNMI directors Hein Haak and Remco den Besten invited me to write or come to KNMI whenever I wanted, get the support from their specialists when I needed it, in order to continue the discussion that was started yesterday. Very nice, and very Dutch.

Thanks to the SPPI blog for the tip, The Hockeyschtick for expanding on it, and climategate.nl for the slides. Popular Tech lists two papers by Andel. Thanks Don B for the link to the Jasper Kirkby paper.

The latest paper “CO2 and Climate”.