Back on August 6, 2010, when the UK BOM was predicting a warm winter, and every Met Agency in the West was already declaring that 2010 would be the hottest year ever, Bryan Leyland predicted (on a global scale) that before the end of the year, there would be significant cooling. As you can see from the chart, this is exactly what happened.

The UK Met Office has a gigantic supercomputer, 1,500 staff and a £170m-a-year budget, but a retired engineer in New Zealand armed only with Excel and access to the internet and with the McLean is et al 2009 paper, was able to get it right.

Parking the SOI index (the blue line) 7 months into the future suggests things may get cooler still as the temperature (red line) often follows the trend. (Click for a larger image.) Note, the SOI is shifted 7 months forwards in time, and the scale is inverted.

Before anyone scoffs that the El Nino’s are usually followed by cooling, and the SOI indicator is well known, ponder that the well fed agencies of man-made-climate-fame weren’t telling the public that a big-chill was on the way and they ought to stock up on salt and red diesel. (And maybe take their own deicing fluid to the airport.*)

Bryan wrote to me to make another prediction: “world temperatures will remain cool until June at least. Whether or not this is the beginning of sunspots induced long term cooling remains to be seen. But there is no doubt that the present La Nina has been quite long already and is quite intense.”

The oceans drive the surface temperatures

The link between the Southern Oscillation Index (SOI) and temperatures is impressive, though, not perfect. The SOI scale is inverted and shifted 7 months into the future to make it easier on us mortals to see the link.

The reason the SOI is so influential is the sheer volume of heat content on-the-move. The cold waters of the deep dark abyss, have snuck up near the surface to steal heat from the ephemeral air. In a post last June, William Kininmonth explains how the whole planet could suddenly “get warmer” during an El Nino, and then suddenly cool again. The ocean floor holds 3km of close-to-freezing water covering 70% of the planet. 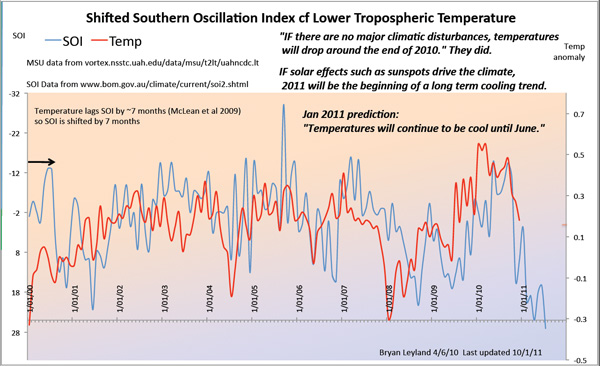 The SOI is at a record high

I asked John McLean about the current SOI level, and he replied:

“The Southern Oscillation Index (SOI) value for December of +27 is the highest December SOI value on record, as well as being the highest value for any month since November 1973.” From BoM “ENSO wrap-up” webpage.

According to the BoM’s data since 1900, the annual average mean temperature anomaly in 1917 was the coldest. (See this BOM page.)

The August 6 prediction confirmed: Is the cold weather coming?

Ever wondered how the whole planet could suddenly “get warmer” during an El Nino, and then suddenly cool again? William Kininmonth has the answer.  The deep oceans drive the atmosphere.

*Yes, I do realize that the SOI doesn’t predict the weather at Heathrow.

Richard at the Climate Conversation (NZ) has also written about Leylands SOI Graph.