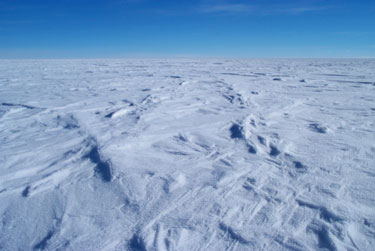 It appears the warming of the 20th Century has been done before.  It’s just business as usual for the planet.

Frank Lansner has been hard at work again, and we’ve been discussing the Vostok ice cores. This time Lansner was looking to see if the current warming trend was unusual, and if there was evidence to support the high climate sensitivities the models suggest. As it happens, most of those high climate sensitivities that the models “estimate” come not from carbon dioxide directly, but from the feedbacks (the way the planet responds to any small change in temperature).

The models assume the net feedbacks are positive. These same feedbacks ought to have been working 100,000 years ago, and if so, there should be some hint of it in the ice cores. Lansner has been hunting for large swings in temperature during the periods when Earth was at a similar temperature to present day conditions — but what he finds is that the current claimed rise of 0.7 degrees C over the last century, even if it were true (and not exaggerated by thermometer siting, the UHI, inexplicable adjustments, or selective use of records) would still be a dog-standard rise.

The Vostok ice cores sampled temperature at 20 – 60 year intervals. At least three times in the last 350,000 years temperatures have been warmer than they are today. If positive feedback was a real factor we ought to see sudden rises that then rapidly increased another 3 degrees within 100 years. That is exactly what Hansen, Gore and the IPCC are telling us is likely to happen. If water vapor rises, sticks around and makes the upper troposphere more humid, then surely we would see it happening in records from the Pleistocene world which had much the same oceans in the tropics as we do today. We can’t measure water vapor back then, but we can see if any natural bursts of warming were amplified. Instead Frank finds that there are often rises of a degree in 100 years, but that it almost never goes on to be amplified into a larger rise.

This fits with the other empirical evidence we have for negative feedbacks. It’s exactly what we would expect given that the radiosondes don’t find warming or more humidity in the upper troposphere (that hot spot is missing). The pieces of the jigsaw fit together.

Frank ignores the times when temperatures were much colder than today. That’s because the feedbacks could be quite different in a cooler world, and what we are really interested in is the current conditions on Earth. Will the CO2 we put out there mean a small warming is magnified into a big one? Feedbacks like the melting icecaps, vegetation changes, and release of CO2 from warming oceans — would work in similar ways no matter what caused the initial rise in temperature. The icecaps don’t care what caused the warming…

Is the warming in the 20th century extraordinary?

I have examined high quality Vostok temperature ice core data from the interglacial periods of the last half million years. These warm periods are the best evidence we have from Earth to examine the dynamics of present day climate on Earth. 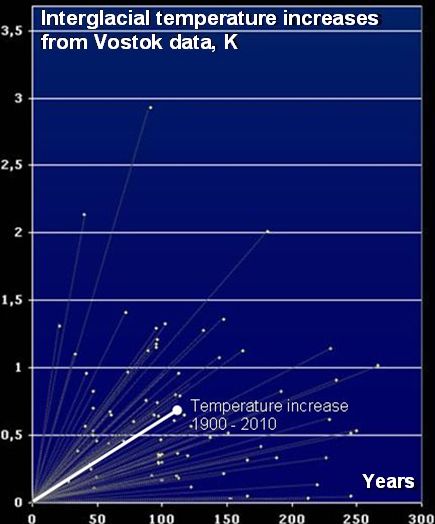 The interglacial periods shows no temperature peaks of the size interval larger than 3K. If in theory a minor warming of 0,5 – 1 K should lead to a 4-5-6 K warming including feedbacks, why are there no such peaks in the previous interglacial periods? There are plenty of 1K warming peaks (resulting of from all kinds of natural mechanisms) to induce the massive positive feedbacks that IPCC and Hansen expects.

Via Joanne Nova, I got a feedback to this result from George White:

“The analysis is consistent with long term averages changing more slowly than short term averages.  The correlation drop at 100 years is because of a periodic effect of about 180 years.  After 90-100 years, the direction of the temperature change reverses and the deltaT drops.  If the analysis is continued, a second peak should appear between 250 and 300 years as a result of the second cycle of this period showing up with a minimum centered between the peaks. ”

Interesting, and thanks to George White. When nature has warmed the planet over 100 years, this warming seems to END rather systematically. If positive feedbacks where strong why do temperature rises end so systematically? At least this warming-turn-off suggest that:

Nature has provided us with data telling a simple story: For periods on earth comparable with today, we see many examples of temperature increases in the magnitude of 1 K for all kinds of natural reasons. Very rarely does any temperature rise (via supposed positive feedbacks) reach 3 K within 100 years.

It is thus surprising that IPCC and others with big confidence can claim large temperature rises of up to 3 – 6 K as most likely result from just a minor temperature increase, for example induced by CO2 warming.

More, it appears (fig 4.) that the temperature rise of 0,7K from 1900 to 2010 is as normal as can be when comparing with other temperature rises during other warm periods.

It’s hard to see how IPCC and others can be so confident in such claims without data from the past to back it up.

Franks full post is on his blog at: Is the warming in the 20th century extraordinary?