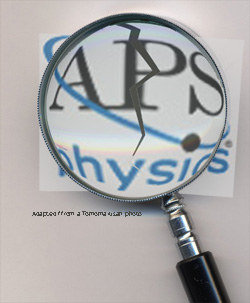 The rift between real science (the pursuit of truth) and PR-science (the pursuit of of money and power) is growing. Associations like The Royal Society, the APS, and the American Chemical Society are beginning to fracture internally as eminent members reject the unscientific pronouncements made on their behalf by small “secret and stacked” committees.

Hal Lewis comes from the elite upper levels of science — a physics professor at University of California (Santa Barbara), and a member of the Defense Science Board (a group of the top 40 or so, advising the Pentagon).

He’s resigned from the American Physical Society (APS) today, after 67 years. The APS is the world’s second largest organization of physicists, with 48,000 members. He is scathing of the fall from grace of the once renowned institution.

Anthony Watts is calling it “…an important moment in science history. I would describe it as a letter on the scale of Martin Luther, nailing his 95 theses to the Wittenburg church door.”

For reasons that will soon become clear my former pride at being an APS Fellow all these years has been turned into shame, and I am forced, with no pleasure at all, to offer you my resignation from the Society.

It is of course, the global warming scam, with the (literally) trillions of dollars driving it, that has corrupted so many scientists, and has carried APS before it like a rogue wave. It is the greatest and most successful pseudoscientific fraud I have seen in my long life as a physicist. Anyone who has the faintest doubt that this is so should force himself to read the ClimateGate documents, which lay it bare. (Montford’s book organizes the facts very well.) I don’t believe that any real physicist, nay scientist, can read that stuff without revulsion. I would almost make that revulsion a definition of the word scientist.

So what has the APS, as an organization, done in the face of this challenge? It has accepted the corruption as the norm, and gone along with it.

In his letter (thanks to Benny Pieser at GWPF) he describes the lengths that the current APS board has gone to, to avoid allowing any discussion about the science of global warming. They use outrageously incorrect labels and describe conclusions of the immature, highly uncertain branch of climate science as “incontrovertible”. Lewis refers to this as a “poison word” which describes few items in physics, certainly not this one. When Lewis and others protested the APS appointed secret committees that never met, didn’t speak to any skeptics, yet endorsed the original ridiculous statements in support of the theory of man made global warming.

The APS ignored it’s own constitution, refused to provide contact details for members, ignored a petition signed by 200 names to review the original unscientific endorsement of man made global warming. Instead of  setting up a Topical Group on Climate Science, they ran a poll of members “interest” in setting up a vague group and formed another secret and stacked committee.

Hal Lewis laments that the giants of science are long gone, replaced with people seeking money and jobs instead of the truth.

I want no part of it, so please accept my resignation. APS no longer represents me

The good name of science has been exploited. It’s time for real scientists to take a stand.

Art Robinson wrote about the how the control of the quest for knowledge itself has been usurped from individuals and private industry and taken over by the government. I discussed his excellent article in The Truth Shall Set You Free.

Art’s description of a true scientist–where the most important attribute is honesty, where humility is inevitable in anyone who understands how little we comprehend, and where being a scientist is a lifelong search…

The 2007 APS Statement about Climate Change

The 2009 APS response to the request to reconsider it.

Their  blog  “discussion” — amounting to all of 9 comments. I posted a comment at the time which was not agreeable enough for the censors apparently.

His resignation letter can be read in full at GWPF or Watts Up.