For months now, behind the scenes, David and I have discussed just how powerful questions can be. Sometimes it’s not what you know, but what you ask that makes the most powerful point.

For his Heartland presentation last Friday, David delivered a themed compilation of example after example of the Western Climate Establishment allowing mistakes, errors or biases to accumulate — each factor on it’s own might be hard to pin down, but the sum total of actions (and inactions) forms a wholly consistent pattern.

This is Part I. These photos speak for themselves, but as far as I know, they haven’t been assembled in one web page before and David stopped waiting for me to get the time to annotate them and has helpfully used red arrows so even the less technically minded will “get” the implications.

You don’t need to have a PhD to know that the thermometers used to measure global warming are not placed well. There are at least Two Great Burning Questions here:

NOAA is a $4 billion dollar agency. If they were determined to get the most accurate, reliable measurements possible would they leave so many sensors placed near asphalt, concrete, tarmacs, exhaust vents and fermenting vats of sludge?

If the mainstream media will print Brittney’s tattoo, why don’t they have space to print full color photos showing just how we measure the temperatures that billions of dollars of legislation depends on?

Is the Western Climate Establishment Corrupt?

[The first in a series of articles reviewing the western climate establishment and the media.
Many thanks to Anthony Watts and www.surfacestations.org for material in this first part.] 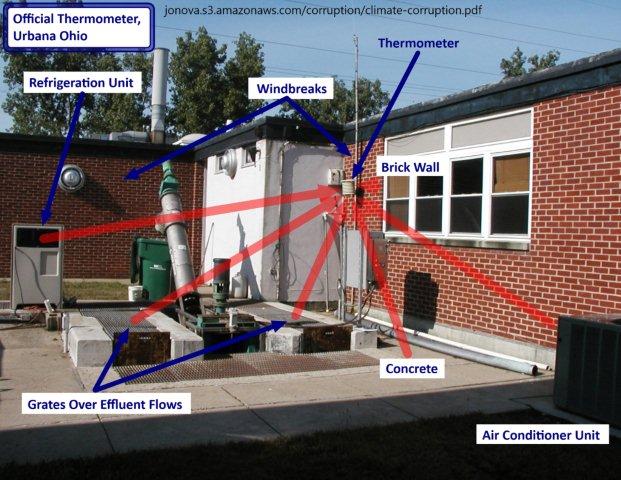 Figure 1: An official thermometer at a waste water treatment plant. It gets extra warming from air conditioning and refrigeration exhaust, concrete, a brick wall, and some mechanical equipment. It is protected by windbreaks. In addition, the effluent flowing under the grates is well above freezing in winter when vapor can be seen rising from the grates. (The red lines show possible heat paths; obviously only a small portion of the heat from each source gets to the thermometer.) Photo courtesy of Anthony Watts, www.surfacestations.org and Steve Tiemeier. 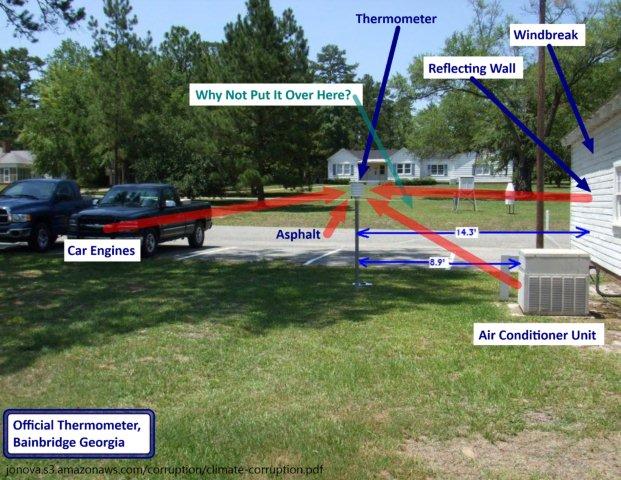 Figure 2: There is a better site on the grass just across the car park, so why is the thermometer near the air conditioner, car engines, asphalt, and reflecting windbreak? Photo courtesy of Anthony Watts, www.surfacestations.org and Joel McDade.

Global warming is measured in tenths of a degree per century, so any slight artificial nudge to the thermometer is important.

To avoid such nudges, the official siting requirements say that the thermometer must be at least 100 feet (30 meters) from any paved or concrete surface, in a level open clearing, with ground cover typical of the region. That is, in a natural and typical clearing.

Anthony Watts , a 25-year broadcast meteorology veteran, recruited 650 volunteers to inspect and document the 1,221 land-based thermometers overseen by the National Oceanic and Atmospheric Administration (NOAA) in the USA. Of the 860 thermometers inspected by early 2009, 89% fail to meet the official siting requirements because they are too close to an artificial source of heat (including artificial sources of reflected or radiated heat).

Why does the climate establishment persist in measuring the official temperature record from thermometers that are nearly all too close to artificial sources of heat?

Why have we only found out about it because volunteers went out and photographed the official thermometers?

Money can hardly have been the problem: NOAA’s budget is now over $4 billion per year.

Over 2001 – 2008 NOAA finally took some steps to fix the problem, setting up a new network of 114 properly-sited thermometers that “50 years from now can with the highest degree of confidence answer the question: How has the climate of the nation changed over the past 50 years?”. However the old network still provides the official temperatures.

NOAA have stopped using a handful of the poorly-sited thermometers whose photos have been circulating around the Internet. But the temperature data from those thermometers is still in the official temperature records. 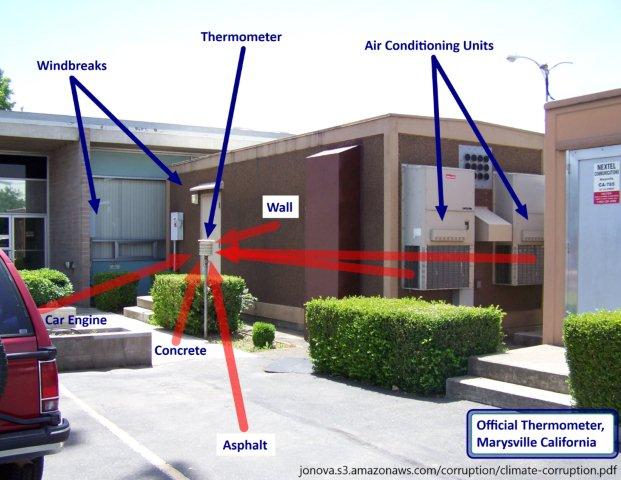 Figure 3: The thermometer at Marysville California . Extra warming from car engines in the parking bays, air conditioner exhaust, asphalt, concrete, a wall, wind breaks, and (see Figure 4) reflections from a steel cell phone tower. They stopped using this thermometer for official data in 2007, after photos of it first appeared on the Internet. But the data collected by this station (back to 1897) is still in the official record. Photo courtesy of Anthony Watts and www.surfacestations.org. 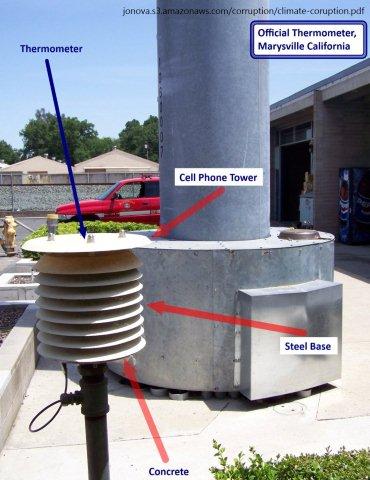 Figure 4: The same thermometer as in Figure 3, viewed from near the air conditioners. Extra warming reflected from a steel cell phone tower. Photo courtesy of Anthony Watts and www.surfacestations.org 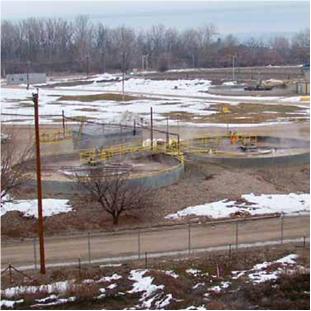 Figure 5a: Waste water is warm (due to the decomposing organic matter)—notice the lack of snow near these wastewater tanks, the rising vapor above the tanks, and how warm they are in the infrared picture. (From  Surface Stations Report (fig 18) 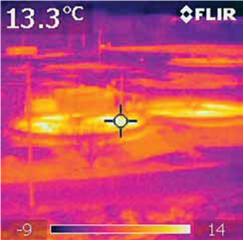 Figure 5b: The infrared picture of the same wastewater plant in Ontario Oregon. (From Surface Stations Report Fig 19) 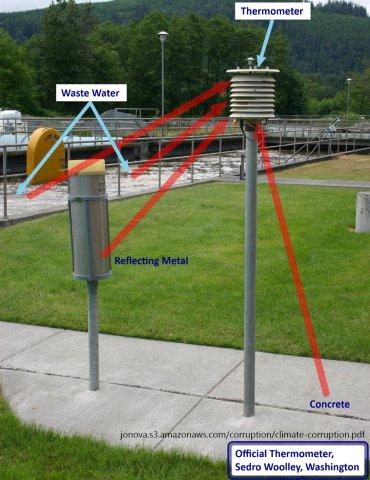 Figure 6: This official thermometer is warmed by the decomposing organic matter in the waste water (the previous figure, of different tanks, shows that waste water is warmer than its surroundings). Photo courtesy of Anthony Watts, www.surfacestations.org and Don and Liz Healy. 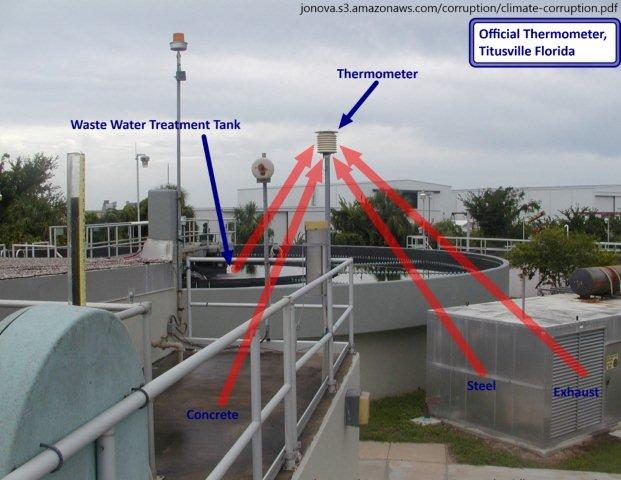 Figure 7: This official thermometer gets warming from nearby waste water, machinery, and metal and concrete surfaces. (There is also another waste water treatment tank behind the camera, and an air conditioning outlet at ground level just below and to the left of the thermometer, out of view.) Not exactly a level open clearing, with ground cover typical of the region, as per the official siting requirements. Photo courtesy of Anthony Watts, www.surfacestations.org and Don Kostuch.

Why hasn’t the mainstream media published any of these photographs? All it takes is to send a reporter or television crew. The thermometers are generally in public places, and their locations are available from the NOAA website. Everyone understands that it’s cheating to put a thermometer near an artificial heat source and pretend that it shows the temperature of the local area.

Is the mainstream media failing to do their job and covering up for the climate establishment?

Is real debate even allowed in the media? The issue of thermometer location is substantive and highly relevant to the existence and rate of global warming, but has never been discussed in the mainstream media. 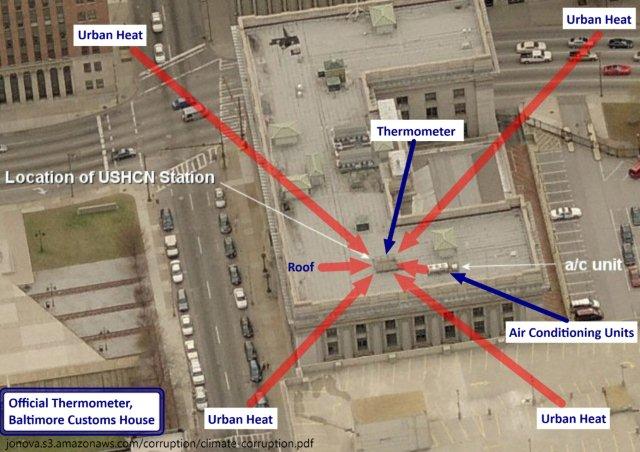 Figure 8: This thermometer gets warming from the roof surface, which reflects and radiates heat, and from a nearby air conditioner outlet. (Couldn’t they at least move the thermometer further away from the a/c?) The urban landscape, with its heat-emitting cars, offices, home, etc., and many radiating surfaces, provided increased heat as Baltimore grew. Spot the “ level open clearing, with ground cover typical of the region”. Photo courtesy of Anthony Watts and www.surfacestations.org.

Land-based thermometers are frequently compromised by the urban heat island effect. The microclimate around a land-based thermometer can change due to urban encroachment, such as nearby asphalt, concrete, buildings, air conditioners, cars, electrical appliances, or changes in vegetation. The annual mean air temperature of a city with 1 million people can be 1–3°C warmer than its surroundings. In the evening, the difference can be as high as 12°C.

These thermometers measure urban growth and increased use of air conditioners, cars, waste-water plants, etc… Why do the climate establishment represent their temperatures to the public as “global warming”? 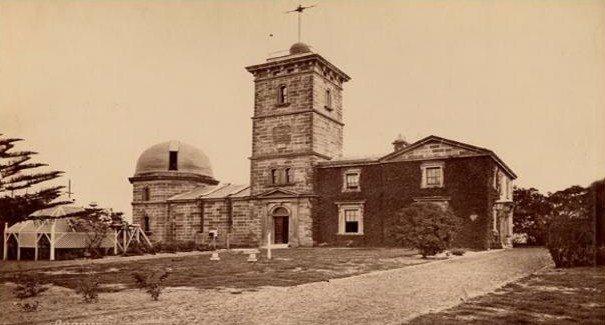 Figure 9: The Sydney Observatory in about 1874, with the official thermometer out the front. Temperature records for Observatory Hill in Sydney date from 1858, when Sydney’s population was less than 60,000. (Source: Anthony Watts’ Australian tour 2010, BOM) 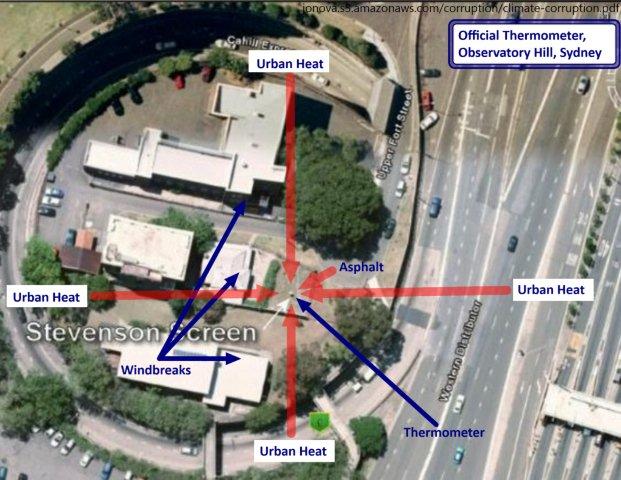 Figure 10: The current site of the official thermometer for Sydney at Observatory Hill (moved 150 meters across the hill from the observatory (previous figure) in 1917). Sydney’s population is now 4.5 million, and there is urban heat generated by cars, industry, homes, and so on. (Source: Anthony Watts’ Australian tour 2010, BOM)

The global network of land-based thermometers has 1,079 official thermometers , at least 54% of which are at airports. Airports have lots of tarmac, which radiates heat at night and thereby raises the temperature recorded at the airport. At many airports, thermometers also get occasional warming blasts from jet aircraft. 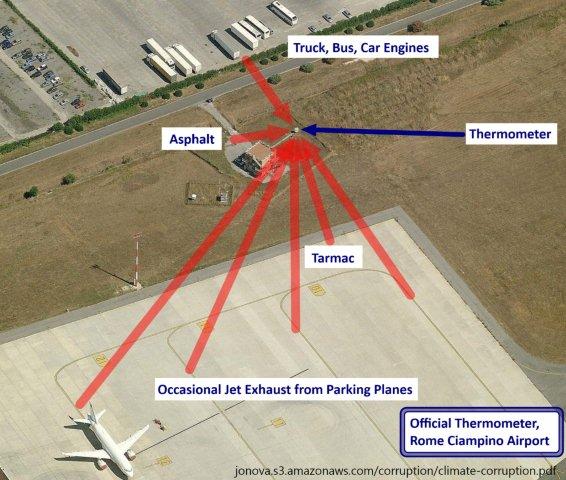 Figure 11: This official thermometer gets some blasts of jet exhaust from parking planes, as well as from several heat sources within 30 meters (100 feet). Source:Watts Up 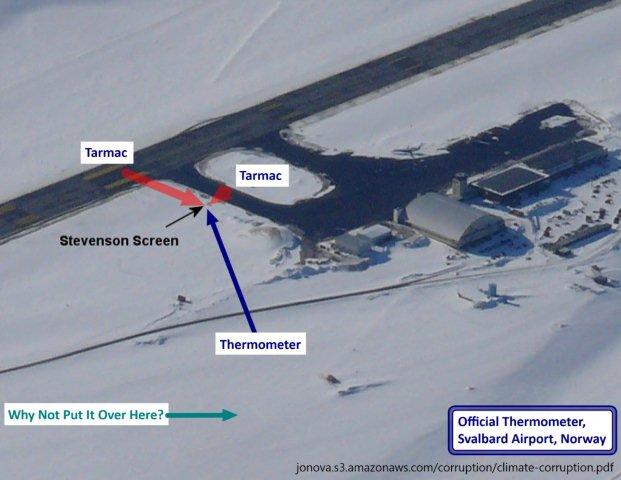 Figure 12: This thermometer is at the edge of the tarmac at Svalbard Airport, which is kept clear in winter. The tarmac is easily the warmest surface around, so the thermometer measures warmer than if properly sited (that is, out in the snow more than 30 meters (100 feet) from any artificial structure). It also gets warming nudges from jet exhaust and steam de-icers. Source: Watts Up

More than 80% of thermometers in the official global network are in urban areas or at airports, which are both unnaturally warm localities. Take a look out the window when you fly—the vast bulk of the land is not at an airport or in an urban area.

Isn’t the climate establishment measuring urban warming and airport warming rather than global warming? They have placed their thermometers to measure the growth and use of cities, air conditioners, planes, water treatment plants, cars, buses, trucks, asphalt, concrete, and tarmac. They measure temperature in many of the globe’s warmest localities, but not global temperature. Yet they report those temperatures as “global warming”.

How have they been able to get away with this?

Where are the auditors or the regulators to check on the climate establishment? If a financial organization or drug company tried to pull this kind of deception they would get busted.

Next article in the series: Air Temperatures (Part 2)

A previous related post by Jo: Global Warming is “caused” by Airconditioners