This point is THE critical one. It was the first point raised in the Skeptics Handbook, developed in the Second Handbook; the point that Dr Glikson had no reply to; the point that tripped up Will Steffen, Deltoid, and John Cook. As a modeler there was the moment in August 2007 when David saw the graphs below and said, emphatically: This is it. It’s over for the climate models. –JN

The argument for man-made global warming consists of three links : 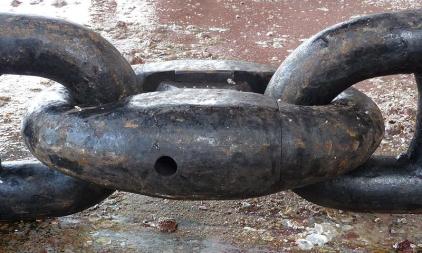 All three links must be true for the theory to be valid; a chain is only as strong as its weakest link.

[Some in the establishment would say there is evidence: They assume that all the warming since 1700 is due to rising CO2 levels (except for a small increase in the sun’s light output). We know the amount of extra CO2 over that period (link 1), how much extra direct warming that causes (link 2), and how much extra warming actually occurred (Figure 17)—so we can calculate the required effect of the feedbacks (link 3) to make that happen, which turns out to be threefold amplification. But this just replaces the threefold amplification assumption with the assumption that only rising CO2 levels caused the warming. It’s still, at base, just an assumption without evidence—because there is (and can be) no evidence that there were no other forces that could have caused the global warming.

The climate establishment also argues, in other contexts, that there are no other forces that could have caused the warming by saying their climate models can only explain the observed warming if CO2 is the only cause of the warming. This logic is circular, because the climate models are only calibrated with threefold amplification based on the assumption that there were no other causes for the recent global warming trend. Talk about having your cake and eating it too. The press apparently isn’t inquisitive enough to notice this trick. When critics outside the climate establishment point it out, the climate establishment just denigrates them and then announces in their most reassuring voice that they are the authorities and it’s all ok. What a bunch of charlatans! Finally, notice from Figure 21 that human CO2 emissions could not have caused the half of the global warming before 1850, so their assumption about no other causes is obviously wrong. So no evidence—just a logical trick that is sufficient to fool most of the audience.

They also on occasion offer up other historical instances as evidence for the threefold feedbacks amplification, but they are all very flimsy. The threefold amplification is really just based on the warming starting around 1700, which is the only instance for which we have decent numbers.]

If there was evidence for the threefold amplification by the feedbacks, surely we would have heard all about it, just like we hear about the evidence for the first two links? Instead we are just referred to climate models and told how terrific they are. But models are just computerized calculations; they are not evidence.

The climate establishment and media only talk about the first two links. Hardly anyone knows about the third link, which is responsible for most of the projected warming. If the case for man-made global warming is strong, why this obfuscation?

The effect of the feedbacks is the crucial question in climate science.

Empirical Test for the Link In Question

To appreciate the desperation and sheer chutzpah of the establishment’s shenanigans, you need to know a tiny bit about the feedbacks.

The dominant feedback involves the extra water vapor that evaporates, mainly off the oceans, due to the direct warming due to the extra CO2. (Water vapor is water in its gaseous form. When water vapor becomes liquid water again it forms droplets of water in the air, that is, clouds.)

There are basically two possible alternatives for this extra water vapor: 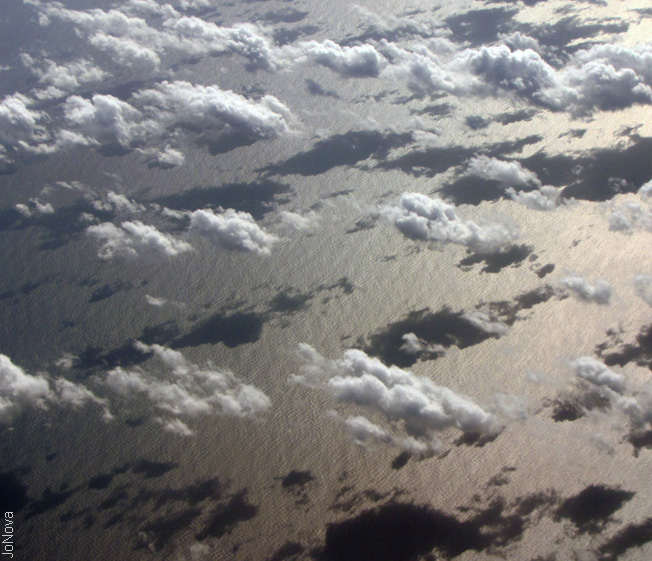 Clouds reflect sunlight back to space and leave cool shadows, in this case, over the tropical Indian Ocean between Australia and Indonesia

The threefold amplification assumed by the climate establishment can only occur if the first alternative is correct. To confirm that the feedback is amplifying, we need to see the depth of humid air increase during a period of global warming. The humid air is also warmer than the dry air above it, so we need to see it become warmer at heights initially just above the humid air. The climate models all specifically say that this happens.

Here is a “prediction” by the climate establishment that the feedbacks are amplifying, expressed as a pattern of warming in the atmosphere. This prediction is empirically testable. 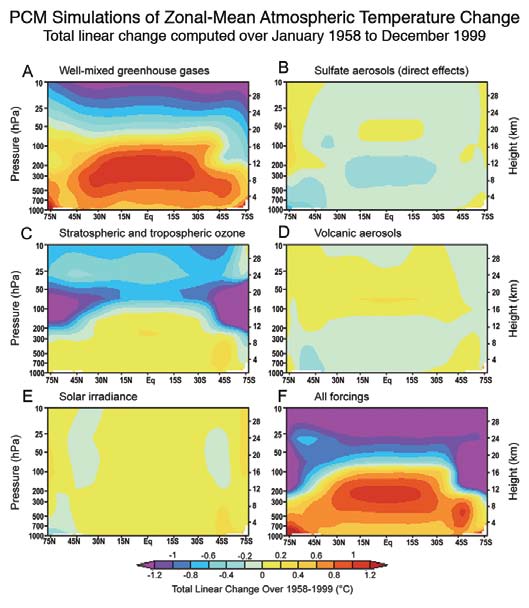 This is the pattern of atmospheric warming that the climate establishment say occurred, according to their climate models. Each of the six diagrams shows temperature changes by latitude (x-axis) and by height in the atmosphere (y-axis, height in kilometers on the right).

Diagram A is the warming pattern due to an increase in greenhouse gases other than water vapor—that is, essentially from CO2 emissions. Diagram F is the warming pattern expected from the sum of all the five patterns A – E in the proportions the establishment believe those causes contributed to global warming; it is dominated by signature A because the establishment’s theory is that the warming was mainly due to CO2 emissions.

The outcome of the climate debate hinges on this issue: a hotspot confirms their theory, its absence falsifies their theory.

The Theory of Man-Made Global Warming Failed an Empirical Test

The last period of global warming was about 1975 to 2001 (Figures 14 and 20). Fortunately, during the whole of this period there was a worldwide program of measuring the temperature at all altitudes using radiosondes—weather balloons with thermometers that radio back the temperature as they ascend through the atmosphere.

During the early and middle 1990s the climate establishment were expecting the radiosondes to find the hotspot, confirm the presence of amplifying feedbacks, and thus prove the last link in their theory of man-made global warming. But then their world fell apart.

By 1999 the results were in, but there was no hotspot. Not even a small hotspot.

Why didn’t the climate establishment rush out to the world with the good news, that they had overestimated the projected temperature increases, that there was now little cause for alarm over the climate?

As it happens, around that time they were publicizing the hockey stick (Figure 23), and basking in the attention, status, and research grants from a concerned world.

They finally published the radiosonde observations in 2006, buried among four other diagrams from climate models at the back of a report. Here is that diagram:

The observed pattern is nothing like the “predicted” pattern, so the climate models are wrong. There was no hotspot in reality, so the theory of man-made global warming is greatly exaggerated (because there are no amplifying feedbacks).

[The non-observation of the hotspot was later supported and extended by two independent observations, one on clouds (Spencer, 2008 and 2010) and the other on radiation leaving the earth (Lindzen and Choi, 2009 and 2010). In both cases the total feedbacks were observed to moderate the direct warming by roughly halving it, which suggests that the climate establishment are exaggerating future temperature changes by a factor of about six—that is, if they say 3°C hotter by the end of the century it will be about 0.5°C warmer.]

The Response of the Climate Establishment

First they ignored it, for several years. (It wasn’t like the media or politicians were asking them hard questions about the discrepancy in Figure 27. And it’s not like they wanted to jeopardize their new-found popularity and funding.)

Then, in 2008, they denied the data. Ben Santer emphasized the uncertainties in the data from the radiosonde thermometers. On the basis of a complex statistical argument he argued that it was possible that the observed data (Figure 26) was so error-ridden that the predicted hotspot (Figure 25) might in fact be present in the observed data. However radiosondes reliably detect temperature differences of 0.1°C when correctly calibrated and operated, and the hotspot is at least 0.6°C of warming. Some radiosondes may have been faulty, but hundreds of them could not all have failed to detect any hotspot.

Then, also in 2008, after nine years and with no new data, they claimed to have found the hotspot! Steven Sherwood adjusted the data in accordance with various theories and wind data from the radiosondes, and processed it on his computer to arrive at a new view of the data in Figure 26: 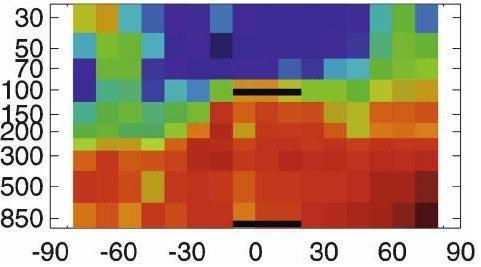 Figure 28: The atmospheric warming observations from Figure 26, after adjustments by Sherwood, including using radiosonde wind data, extended to 1979 – 2005. From Fig. 6 (top) of Sherwood 2008, “short thick bars indicate latitudes discussed in text where sonde adjustments in the troposphere still appear inadequate”.

Note the color of "zero". He pulled the old color-scale trick!

Looks like the predicted hotspot, right? But look closely at the color scale and note the color of zero change—it’s red! So if the atmosphere stayed at exactly the same temperature everywhere, Sherwood’s interpretation would be an all-red graph! The reds in his diagram blend together and it is impossible to see where his “hotspot” might be—but his “hotspot” is too faint anyway, because the hotspot in the climate models is at least 0.6°C over two decades.

If Sherwood used the same color scale as in Figures 25 or 26, it would be obvious that he had not found the hotspot. Why would a leading climate scientist play a “trick” like choosing the color scale such that no change or even slight cooling was in red?

What purpose could there be, except to mislead?

Even if you don’t understand the significance of the hotspot, isn’t a tricky color scale like this a sign of deception, a solid hint that they are trying to hide something?

Sherwood’s paper appeared in the Journal of Climate. Professor Sherwood was at Yale from 2001 to 2008, and is now at the Climate Change Research Centre at the University of NSW in Sydney.

Previous Posts about the missing hot spot include:

The one flaw that wipes out the crisis (Skeptics Handbook II)

Sherwood 2008: Where you can find a hot spot at zero degrees

Round Five: Ignore the main point, repeat the irrelevant (Debate with Dr Glikson)

Even gurus of warming admit the hot spot went missing