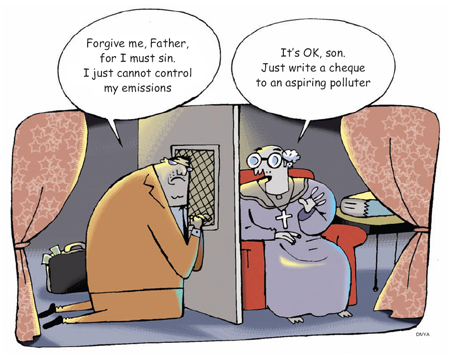 Thanks to Down To Earth Magazine. Author: DIVYA

All round the world thousands of greenonomists recommend a “free market solution” to our so called pollution problem. But as I keep saying: this “free market” isn’t free. It’s a pale pathetic imitation: a “managed market”.

In Europe, if a factory produces CO2 (what factory doesn’t?) it can pay people in China and India to not produce an-equivalent-amount-of-CO2. Sounds sort of fine in intent except that paying people to not do something they were-going-to-do depends on knowing the future (and reminds us of a process known as extortion). That’s loophole number one. Officially it’s called “additionality”, which is a fancy way of saying people wouldn’t do something-in-particular to reduce emissions unless they got paid in carbon credits.

The Chinese and Indians, not being stupid, immediately gamed the system. Why wouldn’t they?

The irony of unintended consequences. Here’s how it goes:

To put it in perspective: In 2009 European installations surrendered 46 million HFC-23 CERs, worth an estimated €550 million. These CERs constitute the majority of offsets used by European companies (59% in 2009). [Source]

Based  on current prices in the European market (around €12), the HFC-23 CERs produced by 2012 will be worth almost €6 billion.

So when the ruling class “invents” a market from scratch, it’s possible for honest hard working Europeans to pay extra money for the advantage of supporting an industry of bankers-lawyers-auditors-&-accountants to make the problem they were supposed to solve, even worse.

One group of NGO’s called CDM Watch announced the flaws on July 2nd. Their report sums up the details:

The analysis reveals that CDM  HCFC-22 plants are intentionally operated in a manner to maximize the production of offset credits, resulting in more HCFC-22 and far more HFC-23 production than would occur without the CDM.

Finally there is some action.

UNITED NATIONS – An obscure U.N. board that oversees a $2.7 billion market intended to cut heat-trapping gases has agreed to take steps that could lead to it eventually reining in what European and U.S. environmentalists are calling a huge scam.

At a meeting this week that ended Friday, the executive board of the U.N.’s Clean Development Mechanism said that five chemical plants in China would no longer qualify for funding as so-called carbon offset credits until the environmentalists’ claims can be further investigated.

The CDM executive board, based in Bonn, Germany, has asked for a decades’ worth of data on the gases from those five plants in China to study whether the system was manipulated.

“The evidence is overwhelming that manufacturers are creating excess HFC-23 simply to destroy it and earn carbon credits,” said Mark Roberts of the Environmental Investigation Agency, a research and advocacy group. “This is the biggest environmental scandal in history and makes an absolute mockery of international efforts to combat climate change.   Full news story here.